A popular area for the past 50 years or so, especially for young crowds, the East Village is touted as one of the more accessible neighborhoods in Lower Manhattan. It also doesn’t hurt its reputation that the whole punk movement that’s now cool again started right here, and ever since, people have been willing to pay Manhattan rents to get a taste of this artistic vibe.

And since there’s much talk of more and more people coming in to settle down, we’re taking a look at what the housing is like and what it costs to get it. Just in case you too decide Brooklyn is just too far away from it all.

Single Family Homes Are Hard to Come By

The East Village is known for unusual boutiques, small family restaurants that are also very affordable and a smashing underground bar scene. Therefore, students and young professionals feel at home here, and indeed, half of the population is younger than 34 years old. A third is made up of family households and there are still many die-hard fans of the neighborhood that have stayed here for decades.

So to match this eclectic mix, apartment owners and developers have (mostly) catered to the crowds: there are high-end condos with amenities and such for the well-off, tiny apartments for the up-and-comers, and pretty much everything in between. On the other hand, 1-2 family houses are rare, making up less than 1% of all living alternatives in the neighborhood, 28 in total.

For the greater part, the neighborhood consists of pre-war, low-rise buildings, as in most of central Lower Manhattan. However, more recent constructions have been going up since the 70s that tend to cluster on the outskirts of the neighborhood, past Avenue B, and to the West, close to NYU and The Cooper Union.

Living spaces across non-rental old and new buildings offer a median of 882 square feet per unit. A small amount of units, about 5%, can’t be called anything but tiny, with under 400 square feet to spare, however, 41% of homes offer a generous space spanning between 1,000 and 2,000 square feet.

Overall, the housing stock is younger than in neighboring Greenwich Village or Gramercy, yet a quick look at listings shows fewer high-end interiors. That, combined with the somewhat underground vibe of Alphabet City, keep a light lid on pricing for the time being.

Across all types of properties, condos, co-ops and townhouses, the market has been particularly favorable for East Village buyers lately. March and April saw prices plummeting by more than 30% compared to spring of 2015. The median home sold for about $770K in April, whereas the median home price for all of Manhattan was a little over $1M. Actually, the largest transaction ever recorded in the East Village involved a 5,600 sq ft condo unit, in a renovated low-rise, that sold for $7M in June last year (pictured below). This year, the largest sale only reached $2,650,000, for a 1,500 sq ft condo in a new development – definitely not cheap, but still Manhattan vanilla.

Meanwhile, new developments going up in the neighborhood are bringing in the wind of change, and with it, higher prices and a whole new class of buyers.

For example, Thirteen East + West, a mid-rise condo on 13th Street slated for completion in summer 2017, offers full-floor units and penthouses. At $2-$3M per unit, building brokers call the pricing “sensitive… to families that wanted to stay in the area”.

There are very few condos in the East Village (around 2% of the housing stock), but with the rise of the condo and developers across Manhattan looking to score big on the upper tier market, all new developments taking place in the neighborhood will likely resemble the example above.

Rentals Make Up 82% of All Housing

There’s only one thing most residents of the East Village can agree on – renting is the norm!

There are 33,240 housing units in the East Village – that includes all privately-owned houses, condos and co-ops, as well as all apartments. Only 5,828 of this total are not rentals, at least on record. Though across Manhattan more people rent than buy a house, the number of renting residents here is remarkable: 82% of the available housing stock is rentals.

As more and more people turn to renting, either by choice or forced by the high costs associated with home ownership, rental apartments in the area are in high demand. The rapid changes in the market and a local culture of transient living constantly bring new faces to the neighborhood, contributing to residents’ feelings of being taken over by outsiders.

Over 6,000 Affordable Apartments in an Otherwise Expensive Rental Market

Being priced out of the rental market is a legitimate concern in the East Village. The average one-bedroom flat rented for $3K in April, and half of all size apartments cost more than $3,450 per month, according to Citi Habitats. In fact, the median rent just topped that of the Upper East Side!

If you take a look at the impact on household budgets, it means that the median household is looking at spending at least $40K per year on housing, if they’re lucky.

Even though Bloomberg already busted the long-held financial belief that you should never spend more than 30% of your post-taxes income on rent, considering that the same median household in Manhattan earns $88,382 a year, it’s worrisome to think that half of that money goes to rent alone.

Over the course of a year, between April 2015 and April 2016, the average rent went up by 1.7%, as MNS reports. The good news is that, at this rate, rents are rising more slowly than in most of Manhattan. Another silver lining comes in the form of affordable apartments in large multi-family developments.

Among buildings and complexes having 50 units or more, 13 are fully affordable, offering 6,032 units for low-income tenants, according to data from Yardi Matrix. 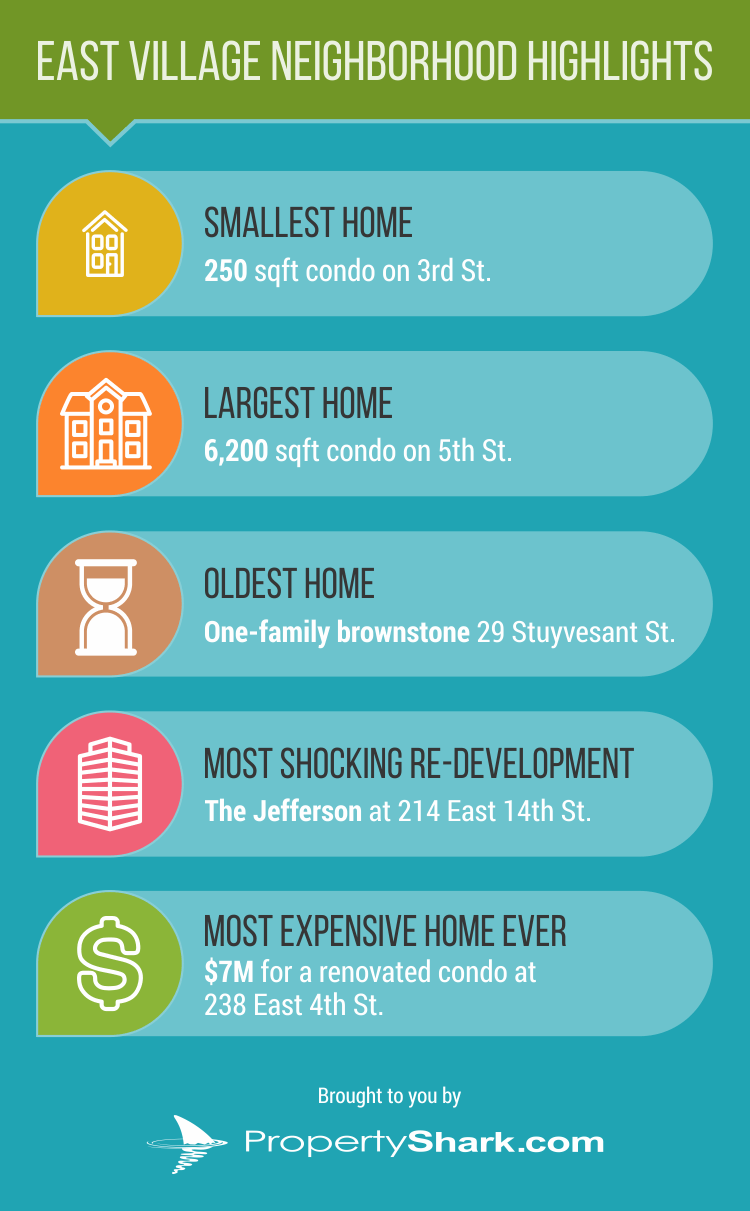 $2,000 per square foot in the smallest condo in the neighborhood

The smallest unit we’ve found is  213 East 3rd Street #1B, counting only 250 square feet. Located in a handsome walk-up condo surrounded by many public gardens, it managed to sell for $500K back in 2006!

At the other end of the size range, a single-family home at 526 East 5th Street offers one of the largest living areas in the neighborhood, spreading over 5,200 square feet. It was bought in 2015 for $6.5M, with a price per square foot that’s well below the Manhattan median.

The largest residential unit in the neighborhood that’s not a townhouse is located inside a condominium building at 214 East 5th Street. Residents of the generous 6,200 square feet space, just round the corner from Cooper Square in a historical district, paid $6M back in 2004 for the privilege. Some stay and some go among the oldest buildings in the East Village.

For some, the whole allure of Lower Manhattan is in the landmarks and historical buildings, and there is certainly no shortage of those in the East Village. Some of the oldest buildings date back to the mid 1800s, and they all feature the familiar red-brick-on-a-row-house element. The oldest one family home was built in 1859, its present-day address at 29 Stuyvesant Street.

Just as old, a single-family house at 189 East 7th Street and functioning as a single-family home, has had a history of Lis Pendens cases and was listed several times in the past seven years, for over $3M. Built circa 1860, it sits across from Tompkins Square Park and just might be looking for new residents.

At the same time, new developments are springing up all around, with little left behind to remind of what used to stand in their place. But for those who love to reminisce, there’s perhaps one transformation in the neighborhood that may be more of a pet peeve than others – the Jefferson Theatre.

Built on the spot of a start-of-the-century vaudeville hall, at 214 East 14th Street, it was later changed into a movie theatre under the name of RKO Jefferson Theatre. And today, nothing of that remains in the look and feel of the 82-unit, ultra-sleek condo built on the lot, except for the name.

East Village has a casual and quirky vibe, which is exactly what has kept young people coming in for decades, and has shaped housing prospects to match. Historical veneer and new century design, luxury condos and shoe-box rentals coexist just fine in one of the most diverse neighborhoods in Manhattan, where pretty much anyone can find a home after their own taste.

When it comes to the cost of living, however, the neighborhood is catching up to other Lower Manhattan areas, known for their exclusionary pricing. While most rentals are expensive, some affordable apartments are available, and buying a home here is still cheaper than in many other Manhattan neighborhoods. However, new developments on the market now introduce buyers to a whole new level of prices.

Check out the full infographic for this article here.

At the end of January, Industrious announced its second new coworking space in Manhattan so…

The most anticipated moment of our contest has finally arrived! It’s time to announce the final winners of both…