There’s a total of 1,137 office listings available for rent in Los Angeles, CA. Across 4,161 unique office spaces , there is a grand total of 28,390,345 square feet. The variety of office spaces currently available ranges in size from 2 square feet to 825,000 square feet. With the possibility to filter your search by location, available space, asking price and more, making it easy to select what works best for you or your business. If your business needs are more flexible than traditional, there are 168 Los Angeles, CA coworking spaces listed, which offer a variety of booking or reservation options, including by the hour, by the day, by month, and more.

Trying to find the right office space near you that meets all your business needs? PropertyShark allows you to search a great variety of available office spaces in your area and makes it easy to find the right home for your company or business. Size, amenities, prices, and locations of office space for rent are easily available to browse with just one click. You can also step outside of your current city and explore other locations, as well as reach out to brokers to learn more about the spaces that catch your eye and their surrounding area. Find your ideal office space for rent near Los Angeles, CA with just a simple search. And, if your professional activity needs require a higher degree of flexibility, with PropertyShark you can also find the best Los Angeles, CA coworking space for your time and workspace preferences, with a quick and easy search using intuitive tools designed for efficiency. 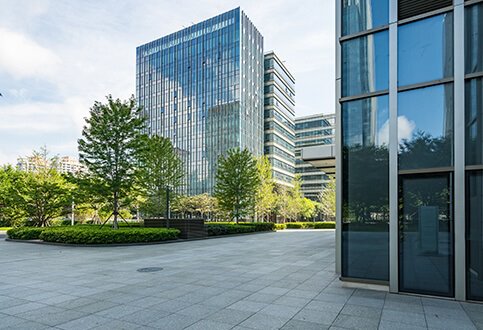 Since its foundation in 1781, Los Angeles has become a global city, being home to the busiest container port in both Americas and the most productive manufacturing industry in the country. However, the metro’s economy is as diversified as can be, with entertainment, international trade, petroleum, tech, fashion, tourism, healthcare and many other industries all playing a part. Many of these industries drive demand for office space in Los Angeles, with some of the city’s neighborhoods being hotspots for office-using companies.

The Los Angeles skyline has seen one of the most striking evolutions in the country. Since the ban on structures taller than the City Hall was lifted in 1958, many recognizable high-rises have appeared in LA’s popular business areas.

A significant amount of Los Angeles office space is housed in the many neighborhoods and districts downtown, most of which are named for the types of businesses or industries they used to support — such as the Fashion District, Banking District and Jewelry Districts. These areas have become high-end destinations for Los Angeles office space especially since the onset of the California tech boom, with traditional financial companies competing with tech giants for space in the city’s top-of-the-line trophy properties.

In particular, more than 75 tech-oriented firms are located in downtown Los Angeles, one of the most substantial areas for the tech economy outside of Silicon Valley. Companies with national or international headquarters in downtown Los Angeles include Anschutz Entertainment Group, BYD Company and Cathay Bank. These tenants and many others drive demand for office space in Los Angeles, resulting in low vacancy rates and consistent supply.

The Los Angeles International Airport (LAX) is one of the busiest in the world, providing ample logistical opportunities for companies looking to set up offices here. The city is also accessible via several other airports within the area, including Hollywood Burbank Airport, John Wayne Airport in Orange County, Long Beach Airport and Ontario International Airport. Los Angeles is further served by an extensive network of freeways, bus lines, subway trains and intra-city train services. As such, the Greater Los Angeles Area is one of the most important logistical corridors in the United States, and companies other than those operating in transportation and logistics can benefit.

When you think “startup” and “California”, your first thought probably goes to Silicon Valley. However, Los Angeles has a long history of established startups becoming the next big deal. In addition to being one of the nation’s primary population centers, the metro’s highly diversified and globalized economy also means that there’s a niche for just about anything you can imagine — and that’s exactly what the startups and solopreneurs working in one of the many coworking spaces in Los Angeles are looking for.

Coworking spaces enable burgeoning businesses to get set up and network with other people operating in their field — without the long commitment of a classic office lease. Plus, spending your workday in a coworking space offers the opportunity to meet freelancers and entrepreneurs who might give your startup the fresh impulse it needs to succeed. And, in a city as diverse as Los Angeles, there’s bound to be a coworking community that’s a perfect fit for anyone.

In particular, downtown is the place to be if you’re looking for a wide variety of coworking spaces in Los Angeles, as it houses no less than 33 such locations. In fact, the downtown area has been experiencing a resurgence in recent times, with new retail locations and culture hubs springing up between the neighborhood’s high-rises. The entertainment hubs of Hollywood and Century City also offer a wide array of collaborative spaces. And, there’s also the student hotspot of Westwood — home to the University of California, Los Angeles — which provides a constant supply of educated and creative individuals looking to join forces with innovative companies.

Check out our listings for coworking and shared spaces in Los Angeles to see what the city has to offer. You can browse the metro’s extensive catalogue of coworking spaces and see which one would be the best fit for you and your business. You can filter spaces by neighborhood, price range and preferred amenities, so all that’s left to do is find the right coworking space, decide on how long you want to rent and keep working on your business goals!

What is the cost of renting an office space in Los Angeles, CA?

What is the average size of office spaces available in Los Angeles, CA?

How to rent office space in Los Angeles, CA ?

Which Los Angeles, CA neighborhoods are popular to rent office space in?

What property types are available for rent in Los Angeles, CA?

Commercial real estate availabilities listed on our platform include everything from industrial properties to retail spaces, as well as coworking offices and traditional office spaces for rent in Los Angeles, CA.

How many office space listings are available in Los Angeles, CA?