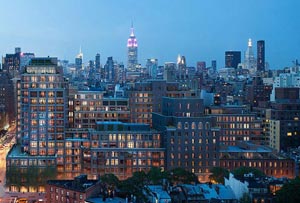 2016 was a great year for some of New York’s largest developers looking to finally cash in on their investments, as several high-profile developments completed construction work and closed a large number of deals initiated in the past 3 years. We took a look at the residential market of 2016 and singled out the developments that managed to sell the highest number of units last year for this latest edition of our Top 10 Best-Selling Buildings.

Many of the headline-making buildings on this list cater exclusively to luxury buyers, as evidenced by the staggering median sale prices reported across dozens of sales in each of these properties – figures much higher than what we saw in 2015.

But while some investors have done very well for themselves in this market, it remains to be seen whether 2017 will keep the mill turning: according to our survey-based predictions for this year, the luxury market is expected to dwindle in the following months.

Most of the properties listed below have been featured in previous editions of this top 10. Still, one new-entry development – the distinctively-named Oosten – had such a smashing Q4, it landed the #2 spot almost overnight. The property, a 261-unit condo building at 429 Kent Avenue, Brooklyn, is the brainchild of Chinese company XIN Development and is their first project in New York. A high-profile seller on the Brooklyn market, the condo managed to attract no less than 100 buyers in the course of 3 months, for a median sale price of just under $1.35 million – pretty swanky even for Williamsburg.

2016 was also a good year for Naftali Group, who saw two of its projects – 234 East 23rd Street (ranking at #8 on our list) and The Seymour at 261 West 25th Street (#10) – find favor with a total of 104 buyers. The two buildings share a distinct industrial-chic look, the result of the clean and simple aesthetics preferred by the namesake architects at Hill West Architects.

Meanwhile, the famed cigarette-thin tower at 432 Park Avenue (#5) sold an astounding 81 of its super-exclusive units in 2016, a true feat of marketing considering the “average” unit in the building went for about $18 million.

The definite winner in our books, however, is the West Village full-block development known as The Greenwich Lane. The complex, made up of 5 condo buildings and 5 townhouses, sold a staggering 145 units last year, and for a hefty median sale price of over $6.2 million no less. Marketed by the Corcoran Sunshine Group, the massive development is now in its third year of sales and, according to its website, only has one condo and one townhouse left for sale.

Properties considered for this list included only developments and condo conversions completed since 2012. This represents an adjustment of the methodology used for previous editions of our top 10 best-selling buildings lists, where we included all residential condos regardless of year built. For this edition, we counted all sales closed between January 1st and December 31st 2016.

The Most Expensive Zip Codes in New Jersey in 2016

In our previous blog post called See Past the LLC: 3 Ways to Unmask the…

Following a period of stabilization, the second quarter of 2017 brought a period of renewed…