A previous PropertyShark study looking at the priciest zip codes in Illinois in 2016 showed that Chicago has the largest number of expensive zip codes in the state. That’s not surprising, given that properties in the Windy City often go for exorbitant prices—a 71st floor penthouse at The Legacy at Millennium Park fetched $6.2 million last year.

In 2017, the city’s residential market has been going slow and steady; median home prices in Chicago marked a modest 1.6% year-over-year increase, resting at $254,000 at the end of October. To get a better grasp of how the Chicago market fared this year, we zoomed in to see which are currently the city’s most expensive zip codes.

Keep reading to discover how median home prices have evolved in each zip code of the Windy City: 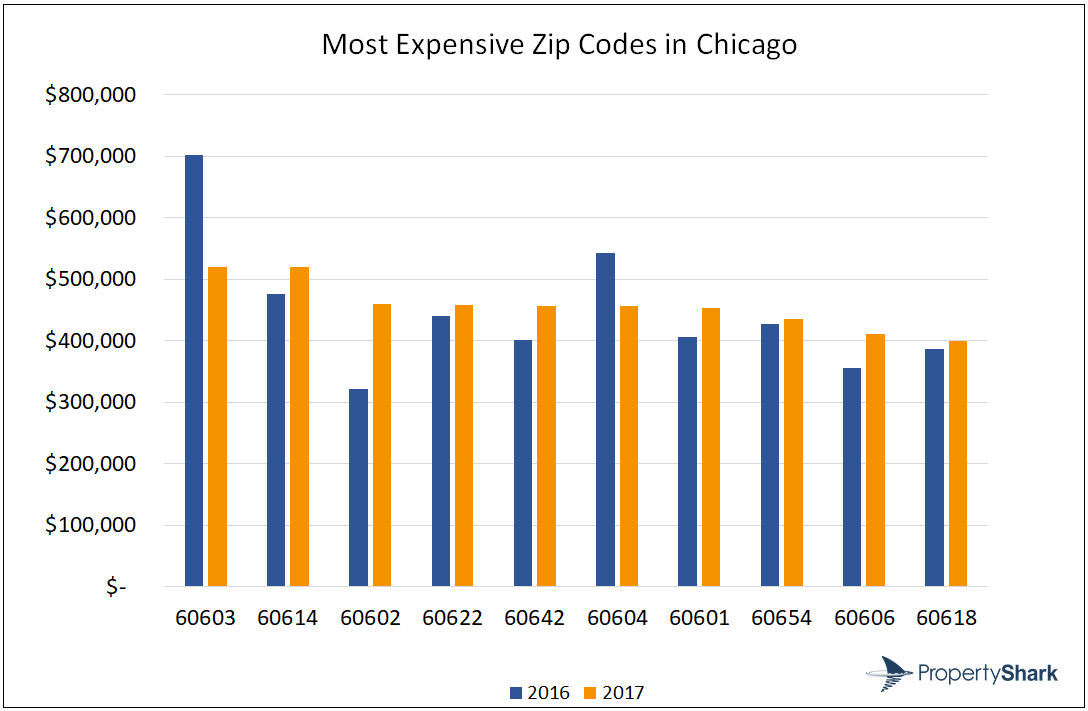 #1. Covering a small part of The Loop, 60603 is Chicago’s priciest zip code with a median home price of $520,000. Even though median prices in the area dropped 26% year-over-year, 60603 maintained its first spot on our list of most expensive zips, after also ranking first in 2016.

Last year the 60603 zip code landed on the first spot, with a median home price of $702,500. The inflated median price was strongly influenced by the large number of units that changed hands at The Legacy at Millennium Park.

#2. Coming up next is Chicago’s 60614, which saw a 9% increase year-over-year in median sale prices. The zip code covers part of Chicago’s North Side, encompassing neighborhoods such as Lincoln Park, Park West, the Old Town Triangle, and a couple of others. The 60614 zip code saw median home prices reach $519,000 at the end of October 2017.

60614 is no stranger to luxury homes either, like this swanky property at 1307 West Wrightwood Avenue. The cozy three-bedroom, two-bathroom unit enjoys plenty of natural light, has its own private outdoor terrace, and features an asking price of $699,000.

The inflated median prices in the 60602 area are a result of the high number of luxury condos sold at The Heritage at Millennium Park. Located at 130 North Garland Court, the 57-story tower accounted for well over half of all transactions recorded through October 2017. The most expensive unit sold at The Heritage this year was a four-bedroom, three-and-a-half-bathroom property on the 53rd floor, which fetched $2,475,000.

Check out all of Chicago’s zip codes in the table below:

Methodology: To determine which were Chicago’s most expensive zip codes in 2017, we looked at all residential transactions closed between January 2017 and October 2017, and compared them with the figures from January 2016 to October 2016, taking into account condos, co-ops, and single- and two-family homes. All package deals were excluded.

Top Most Expensive US Zip Codes in 2017