From a city’s economic engine to the center of political and administrative power. From cultural heart and nightlife hotspot to dilapidated buildings and high crime rates. From opulent penthouse suites to derelict homes. The downtowns of American cities, both big and small, have always been dynamic places that shifted with the times.

From the early days when a city center held the majority of a city’s dwelling units, its primary markets, as well as civic functions such as trials and even an occasional public execution, to the shift towards urban cores of office complexes, full of life during the day, but empty at night, from the white flight to suburbs of decades past, to the current downtown gentrification, the role and importance of downtowns has ebbed and flowed through time.

A decade after the worst financial crisis in living memory, we decided to take a look at price evolution of American downtowns. Analyzing a decades’ worth of home prices in 34 of the largest cities in the country plus Manhattan and Brooklyn, we compared their median sale prices to that of their downtowns, as well as the evolution of these indicators from 2008 to 2018 to see if it really is that much more expensive to live downtown. Not all downtowns are created equally. Not all have seen the rebirth that the downtowns of Charlotte, Manhattan and San Francisco have experienced over the last decade, where redevelopment efforts have brought life to urban cores. For these centers, the appeal of living in the heart of the city has continued to grow throughout the last decade.

In Charlotte’s Uptown the median sale price was $160,250 more expensive in 2008 than the rest of the city. By 2018, the price difference reached $281,000, as the banking hub diversified its industries, breathing fresh life into Uptown.

For other cities, such as Minneapolis or Denver, the price difference between homes in the downtown and the rest of the city has been steadily decreasing. And for others yet – like Las Vegas, Bakersfield and Los Angeles –, buying a home downtown has been cheaper than in the rest of city throughout the last decade.

Downtown Minneapolis’ median was $185,756 higher than the city overall. But that difference has been on a downward slide over the last decade. As a result, 2018 closed with the downtown just $67,000 pricier than the rest of Minneapolis. It’s no surprise that Manhattan, the epicenter of pricey real estate, is one of the locations where downtown home prices are significantly higher. Not only that, but the premium for downtown living has increased significantly since 2008 – downtown Manhattan’s median sale price was $100,000 higher than the rest of the borough then. In 2018, it was $335,000 more expensive, which, while high, is far below the difference in 2016, when downtown Manhattan was $620,000 pricier than the rest of the borough.

Philadelphia too, puts a premium on downtown homeownership, with a growing gap between the median of Center City and the rest of Philadelphia. In 2008, Philadelphia’s median sale price – excluding downtown sales – clocked in at $114,00, while Center City’s median was $385,000. In the decade since, Center City’s price evolution has been on an unrelenting upward swing, ending 2018 with a $406,450 difference between Philly’s urban core and the city at large. In short, homes in Philadelphia’s downtown are 4 times as expensive than the rest of the city.

Boston too, shows striking differences between the city at large and the Downtown – Financial District area, with the price difference mostly on an upward swing. Although sales volume showed the effects of the downturn, and indeed sales activity is set to return to pre-recession levels, as far as prices go, both Boston and its downtown have experienced increases in their median sales prices year-over-year.

But while Boston – without its downtown – saw its median sale price go from $335,000 in 2008 to $590,000 in 2018, the Downtown – Financial District area shot up from $637,500 to $959,000. The price growth experienced by Boston makes perfect sense in the context of tight inventories, as well as Boston’s 13% growth in the number of households, and even more so when considering that the median household income shot up 23% during the same timeframe.

Then there’s Chicago, the city with the largest difference between the downtown’s median sale price and the rest of the city, closing 2018 with a whopping $675,000 premium for downtown living. This comes as a result of a prolonged recovery time for the city’s market, while the downtown saw prices expand at a rapid rate throughout the downturn and recovery.

As such, while the city’s median sale price reached $220,000 in 2008, it ended last year with a median of $225,000. Meanwhile, Downtown Chicago posted a $656,000 median at the start of the financial crisis and a $900,000 median last year. In fact, 2016 brought an even more drastic difference between the core and the city. As the city’s median finally reached pre-recession levels, the downtown’s median surpassed the $1 million mark. Thus, a spectacular $805,000 price difference was registered between Downtown Chicago and the rest of the city. In Charlotte, the effects of gentrification have steadily pushed prices up since the downturn. The Queen City’s Uptown was already noticeably pricier in 2008, with the median sale price $160,250 higher than the median of the rest the city. By 2018, that difference jumped to $281,000, with Charlotte’s median clocking in at $219,000, while Uptown Charlotte hit a cool $500,000 median sale price.

Both Charlotte’s and Uptown Charlotte’s home price appreciation is unsurprising as the city’s diversifying economy has been attracting a highly skilled workforce. In fact, Charlotte’s population saw a 14% increase in households, paired with a 14% hike in the median household income, while unemployment was slashed by 55%.

Downtown Detroit also saw the difference between its median and the rest of the city widen since 2008. While in 2008 the downtown median was $117,500 higher than Detroit at large, the following years that difference dropped to as low as $6,000 with as few as 19 sales closed per year. Although MoTown continues to struggle economically and with an ever-shrinking population, closing 2018 with an unbelievable city median sale price of $37,000, revitalization efforts in Downtown Detroit brought its median to $229,250. As such, this is one of the most noticeable differences between a city and its downtown area. 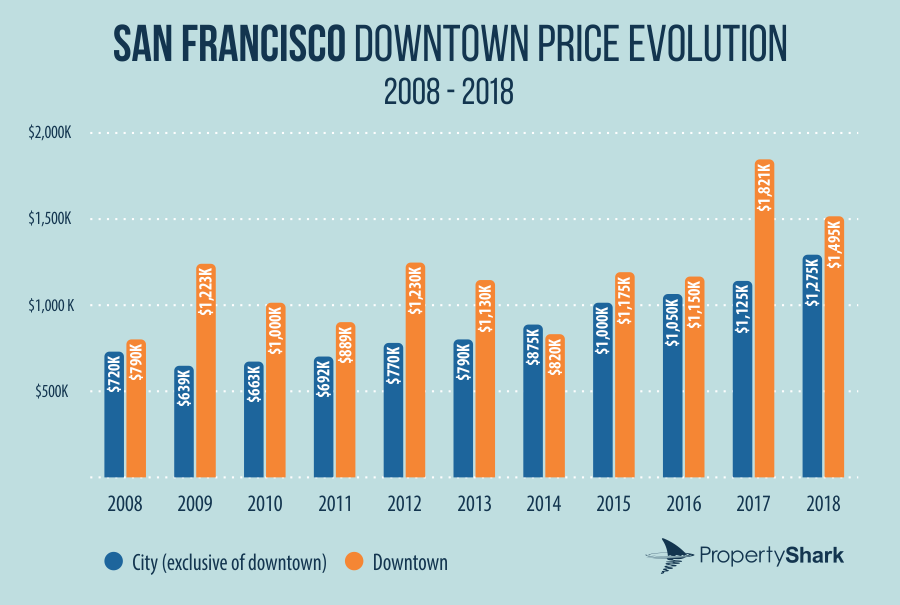 San Francisco presents a fascinating picture of city-wide recovery post-recession, with medians dipping during the downturn and then going vertical. After all, the city-wide median – exclusive of the downtown area – grew by more than half a million between 2008 and 2018. Then again, the median household income grew 33% during the same period here.

Downtown San Francisco on the other hand saw its median fluctuate both up and down by as much as $500,000+ year-over year. As a result, the price difference between Downtown San Francisco and the rest of city varied wildly from as high $696,000 in 2017 to as low as -$55,250 – meaning that in 2014 the downtown median was lower than the city median. 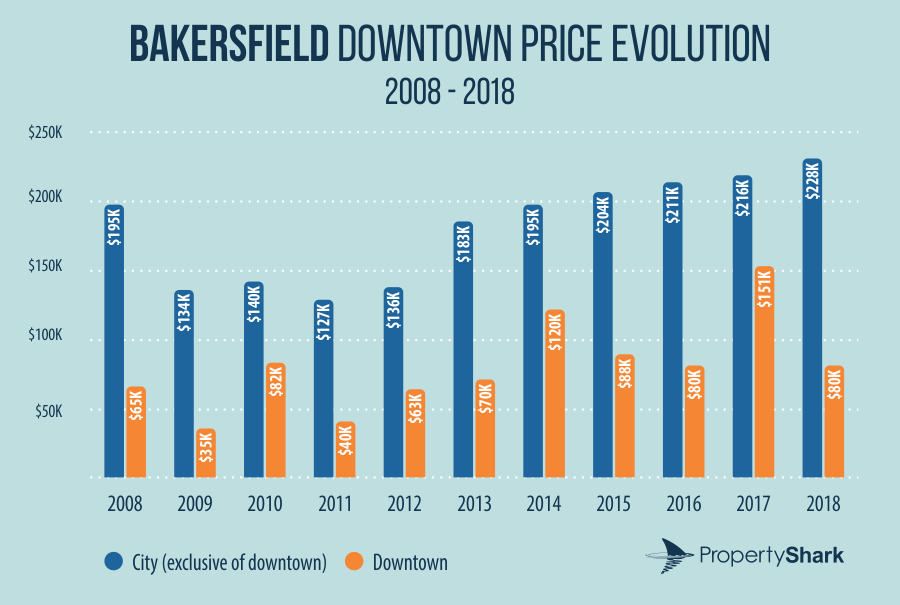 California’s downtowns trend on the cheaper side

Los Angeles is the largest city where the downtown median is lower than in the rest of the city on a sustained basis. It must be noted however, that Downtown L.A.’s lower median is influenced by the area’s crime issues, while medians for L.A. exclusive of downtown sales are skewed by ultra-exclusive neighborhoods.

In fact, a number of Californian cities seem to have cheaper downtowns, including San Jose, Bakersfield, Long Beach and Fresno. San Diego’s downtown has trended downwards over the past 10 years, closing the past three years with lower downtown medians than the rest of the city. Sacramento and San Francisco are the two most noticeable exceptions to this trend.

Overall, Long Beach, Bakersfield and Fresno are California’s top cities when it comes to lower home prices for a downtown location. Adding up the difference between downtown and city medians over the past 10 years for each location separately, it turns out that all three downtowns are more than a cumulative million dollar cheaper than the rest of them.  Neither Bakersfield’s nor Fresno’s downtowns have ever been pricier than the rest of the city since 2008.

Downtown medians here were lower by six figures in each location in 2018 – Downtown Bakersfield’s median sale price was more than a $148,000 lower, while Downtown Long Beach landed the top spot with a median sale price $182,000 below the rest of the city.

Explore the interactive table below and follow the evolution of median price differences between the downtown and the rest of the city in 34 major cities plus the New York boroughs of Manhattan and Brooklyn. Scroll and slide to get the full price evolution between 2008 and 2018.

To determine the yearly median sale prices for each city, we looked at all residential transactions for single-, two-, three- and four-family homes, condos, coops, row- and townhouses. All package deals were excluded. The same criteria were applied to calculate the median sale prices for each downtown area, defining downtown boundaries according to proprietary PropertyShark maps. Population, unemployment and median income data was sourced from U.S. Census Bureau statistics.

We invite you to share this information about downtown home price evolution with your readers. When you do, we ask that you provide a link back to this page, so your readers can learn more about this project and view any additional research.

How to Resolve A Neighborhood Fence Dispute

D.C., Dallas-Fort Worth and the Bay Area were found to be the nation’s biggest suburban office markets. DFW lead the list for suburban office developments in the last 10 years.