One of the most exclusive real estate markets in the nation, the Bay Area has been marked by dynamic price growth in the past five years. Analyzing residential sales in 2014 and 2018 across all nine counties, we found only one market – Penngrove – where the median sale price was lower in 2018 than it was in 2014. Of the 107 Bay Area communities we reviewed, double-digit price expansion was the norm in 103 of them. In fact, one-third experienced a growth rate of 40% or higher, with 12 markets increasing their medians by 50% or more.

Considering the rapid price expansion of the Bay Area, perhaps it’s not surprising that the number of markets boasting a median sale price greater than $1 million has doubled in just five years. In 2014, there were 22 markets with a median sale price of $1 million or more; in 2018, that figure climbed to 43.

Unsurprisingly, San Mateo County boasts the highest share of luxury markets, with 16 of the 43 municipalities with median sale prices greater than $1 million located here. That figure includes the Bay Area’s three most expensive communities: Atherton, Woodside and Hillsborough – all of which surpassed the $4 million median sales price mark in 2018. 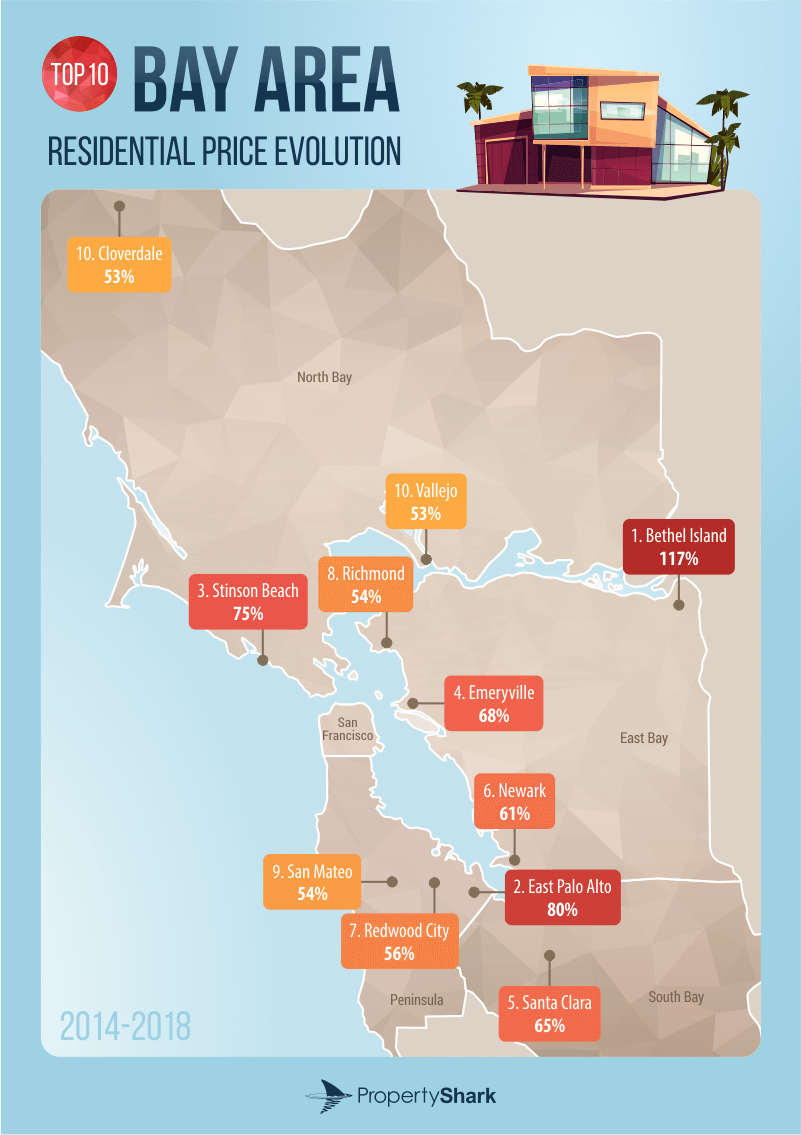 Overall, the most spectacular price growth was concentrated on the Peninsula and in East Bay: 14 of the top 20 price gains were recorded in towns, cities and CDPs located here. The top spot, however, was secured by Bethel Island in Contra Costa County. The tiny CDP recorded a jaw-dropping 117% median sale price appreciation in just five years, posting a median of $499,000 in 2018.

Even so, Bethel Island remains one of the most affordable residential markets in the Bay Area – the 13th least expensive, actually. But, how long it will be affordable remains to be seen; sales activity also increased on the island, jumping 38%. For now, however, Bethel Island remains the most rapidly appreciating market, despite the fact that its 117% price growth represents a gain of just $269,000.

By comparison, Stinson Beach gained a cool million in just five years, posting a median sale price of $2,375,000 in 2018. With a price appreciation of 75%, Stinson Beach was the third-fastest-growing market in the Bay Area between 2014 and 2018. Its popularity among buyers also grew; 50% more sales closed last year than in 2014.

However, in terms of sheer dollar amounts, the Bay Area’s fastest-appreciating markets tended to range closer to Bethel Island’s price expansion and that of East Palo Alto, which saw its median climb by $420,000. That represented an 80% gain for the San Mateo community, making it the second-fastest-appreciating Bay Area market with a 2018 median of $944,000. However, sales activity did drop here, with 16% fewer sales closed last year than in 2014. 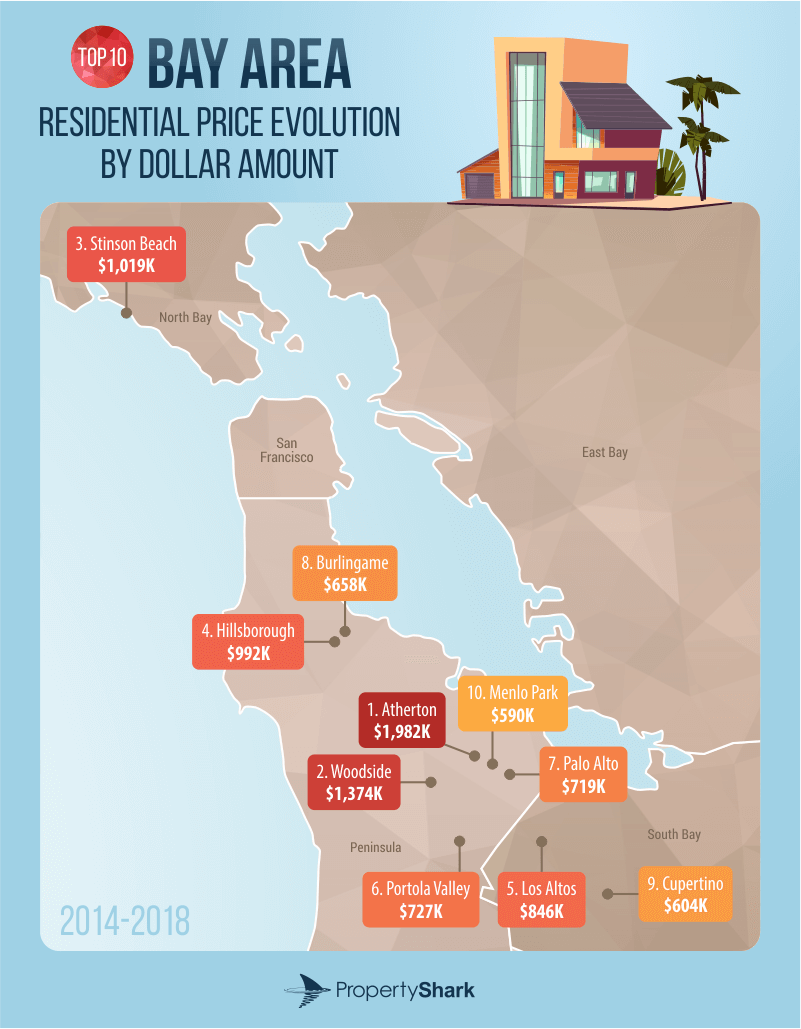 Sonoma County’s Penngrove sat at the other end of the spectrum as the only Bay Area market where the median sale price dropped. The North Bay community featured a median sale price of $666,000 last year – 14% below its 2014 figures. One major influence for that drop was a ramp-up in sales activity; Penngrove closed 88% more sales in 2018 than it did five years earlier.

Overall, sales were on the downslide across the Bay Area, with the most significant contractions recorded in the priciest markets. San Mateo County’s Brisbane led the sales slowdown, closing 66% fewer sales last year than in 2014. It was followed by Marin County’s Larkspur, with 43% fewer sales closed. Woodside, Hillsborough and Atherton – the three most expensive markets in the Bay Area – were also among the top 10 to experience a slowdown in sales, closing around 33% fewer sales. 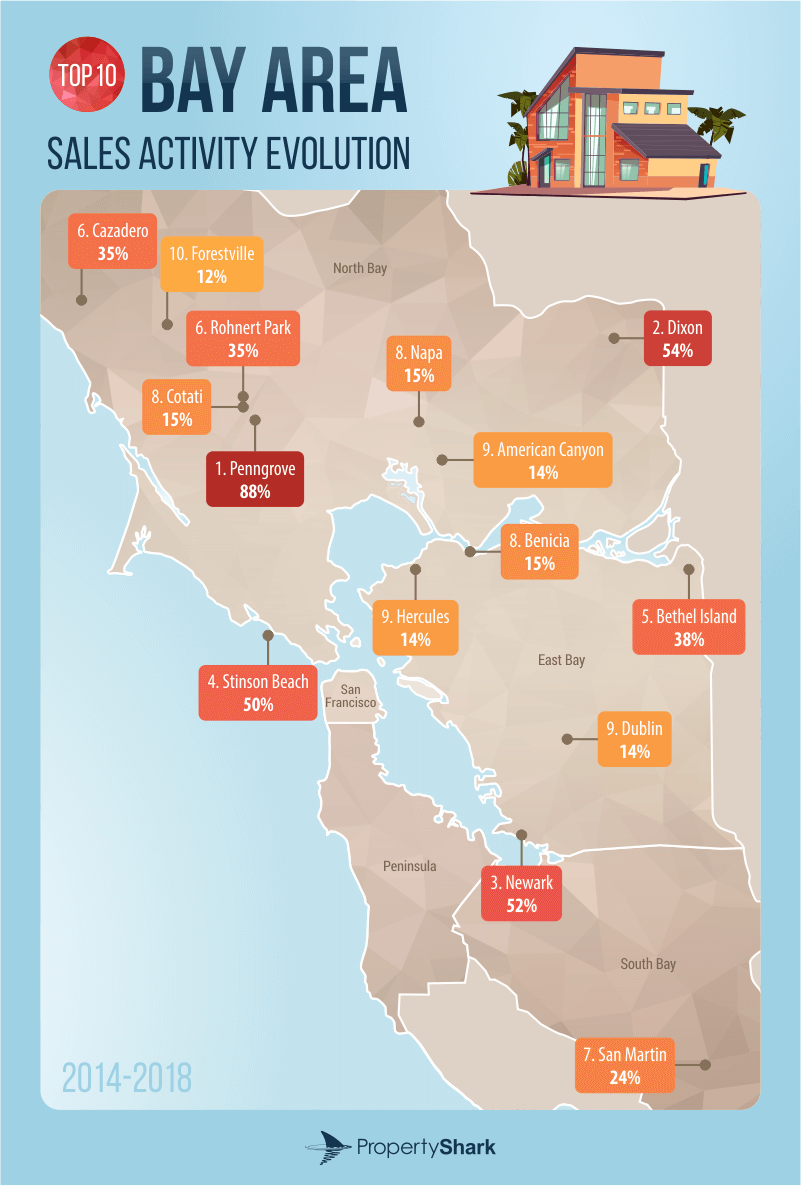 The Bay Area’s dynamic economy and growing population, fueled by the inescapable tech sector and Silicon Valley dollars, meant that the number of markets where the median sale price exceeds $1 million doubled since 2014. While only 22 markets sported medians above the $1 million mark in 2014, 43 markets did so five years later.

Additionally, 11 more markets posted medians between $900,000 and $1 million, accompanied by rapid price gains recorded over the past five years. For example, Newark and Bodega Bay posted medians of $975,000 in 2018 after their medians appreciated 61% and 40%, respectively. As such, both markets are bound to reach the $1 million category in the near future.

When it comes to median sale price growth, markets above the $1 million threshold underwent significant gains – both in terms of percentages as well as sheer dollars. In fact, three Bay Area markets saw their medians swell by more than $1 million between 2014 and 2018: Stinson Beach, Woodside and Atherton.

Woodside boosted its median by $1,374,000, closing 2018 with a median sale price of $4,316,000 – the second-highest median in the Bay Area. As a testament to the Bay Area’s sky-high prices and rapid appreciation, Woodside’s 47% growth rate is merely the 20th most-dynamic expansion rate between 2014 and 2018 – tied with Union City and Mountain View.

Analyzing the Bay Area from a regional perspective, the East Bay and Peninsula led in terms of sale price growth rate. Among the top 20 fastest-appreciating markets, East Bay was represented by eight entries; the Peninsula had six. From the perspective of sales activity, North Bay led the way: 15 of the 29 markets that increased their number of sales between 2014 and 2018 were from North Bay. In fact, 12 of the 20 leading markets for gains in sales activity were located in North Bay.

As far as price evolution, Stinson Beach took the top spot for North Bay. The Marin County community saw its median grow by 75% between 2014 and 2018, which translated into a hike of more than $1 million. This was followed by Sonoma County’s Cloverdale and Solano County’s Vallejo, both of which saw their medians inflate 53% while sales activity trended down. Moreover, Sonoma County led North Bay in median sale price gains, with seven of the region’s 10 most -impressive price gains originating here.

As expected, the Peninsula was the unmatched leader of dizzyingly high medians with 12 of the Bay Area’s 20 most expensive markets located here, including heavy hitters like Los Altos, Palo Alto, Menlo Park, Cupertino, Mountain View and, of course, Atherton, Woodside and Hillsborough. In fact, with the exception of Marin County’s Ross, all Bay Area markets with medians above the $3 million mark were from the Peninsula.

South Bay placed two markets among the Bay Area’s priciest: Cupertino, the 13th-most expensive with a median of $2,230,000, and Los Gatos, the 14th-priciest at $1.9 million. Both markets experienced noticeable price gains between 2014 and 2018: Cupertino’s median expanded 37%, while the median in Los Gatos climbed 23%. South Bay’s top price gain – both in terms of percentages and absolute dollars – took place in Santa Clara, where the median shot up 65%. This pushed Santa Clara well into the $1 million category, posting a median sale price of $1,360,000 in 2018.

The East Bay, of course, led with Bethel Island, the Bay Area’s fastest-growing market. Bethel Island’s 117% price growth was followed by Alameda County’s Emeryville and Newark, where the median sale price shot up 68% and 61%, respectively. Alameda’s Piedmont was the East Bay’s priciest market, with a median sale price of $2,300,000, followed by Berkeley’s $1,270,000. Contra Costa’s most expensive markets were Martinez and Brentwood, tying at $590,000.

Browse the table below for the full picture of the Bay Area’s residential price evolution:

For this study, we considered the Bay Area as the counties of Alameda, Contra Costa, Marin, Napa, San Francisco, San Mateo, Santa Clara, Solano and Sonoma, as per the definition of the Association of Bay Area Governments.

To determine the evolution of residential prices, we considered all residential transactions closed in 2014 and 2018 in 107 towns, cities and CDPs, taking into consideration single-family homes, condo units and co-op units. All package deals were excluded. In order to ensure reliable price trend data, we set a minimum of 20 sales per year per location.

The Hamptons median sale price reached $1.5 million in the first half of 2022, marking a slight uptick compared to the same interval in 2021.

NKF Capital Markets has arranged the placement of a $26.2 million loan with PCCP for… 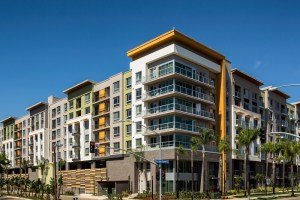