The National Hot Rod Association (NHRA) recently listed for sale its headquarters in Glendora, Calif., as part of its plans to relocate to Indianapolis.

After the experience of working from home due to the pandemic, the NHRA has determined that it can reduce its 28,335-square-foot office and warehouse footprint in Glendora, which is considered the home of drag racing.

The office and warehouse space is situated on a 1.65-acre campus in the foothills of the San Gabriel Mountains, and features amenities including landscaped grounds with outdoor patios and a large surface parking lot. Additionally, the approximately 5,000 square feet of warehouse space benefits from 12’ to 24’ clear height and two ground-level roll-up doors. The seller is also willing to lease back half of the building for the short- or long-term, subject to the deal.

The headquarters also enjoys a prime location in Glendora, which is around 26 miles east of downtown Los Angeles, but also offers a unique suburban feel. Moreover, Glendora’s downtown — dubbed Glendora Village — hosts trendy restaurant and cafes, as well as high-end shops and boutiques.

Jeffrey Young, vice president of marketing and communications for NHRA, confirmed that the sanctioning body would split its operations between Indianapolis and Glendora.

The company will now be looking toward its office in Brownsburg, Ind. — which is part of the multi-purpose Lucas Oil Raceway at Indianapolis — for most of its day-to-day operations. The property is located just five miles from the Indianapolis Motor Speedway, the home of the IndyCar Series and NASCAR.

Indiana and Hendricks County are reportedly trying to maintain the area’s reputation as the “Motorsports Capital of the World” by attracting companies operating in the racing industry through business-friendly policies. However, office space in Indianapolis isn’t only popular with racing organizations: Recently, Indianapolis-based tech company Innovatemap announced plans to invest nearly $1 million in renovating and equipping its headquarters in the city. 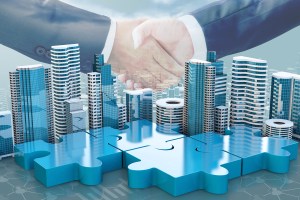 The REIT paid $131 million for its venture partner’s 75% stake in a Raleigh office campus.