Despite major foreclosure activity increases in two boroughs, first-time foreclosures in New York City stagnated, with only a 1% city-wide uptick year-over-year. A total of 723 residential properties hit the auction block for the first time in the third quarter of 2019. NYC foreclosures are still relatively high, having a trend of 700/800 first-time cases in each quarter since the beginning of 2018.

Unique foreclosures dipped in 3 out of the 5 boroughs, with cases increasing only in Manhattan and Staten Island. The Bronx, Brooklyn and Queens continue the downward trend they’ve been on since 2018.

Staten Island led borough activity with a staggering 183% increase, followed by Manhattan with a 118% increase. Even though foreclosures had a large spike in Manhattan, the number of properties foreclosed only increased from 22 to 48 compared to the same period year. Activity in the Bronx dropped by 51%, while Queens saw a 10% dip in unique cases year-over-year.

Foreclosures in Manhattan increased drastically year-over-year when it comes to percentages, however, the absolute numbers aren’t nearly as spectacular. Percentage wise, the borough saw a 118% surge, from 22 cases from Q3 2018 to 48 cases this quarter. 25 out of the 48 foreclosures were mortgage foreclosures.

The 10019-zip code, which encompasses Midtown, Times Square, Herald Square and Midtown South neighborhoods, had the most recorded first-time foreclosures in Q3 2019 in Manhattan. 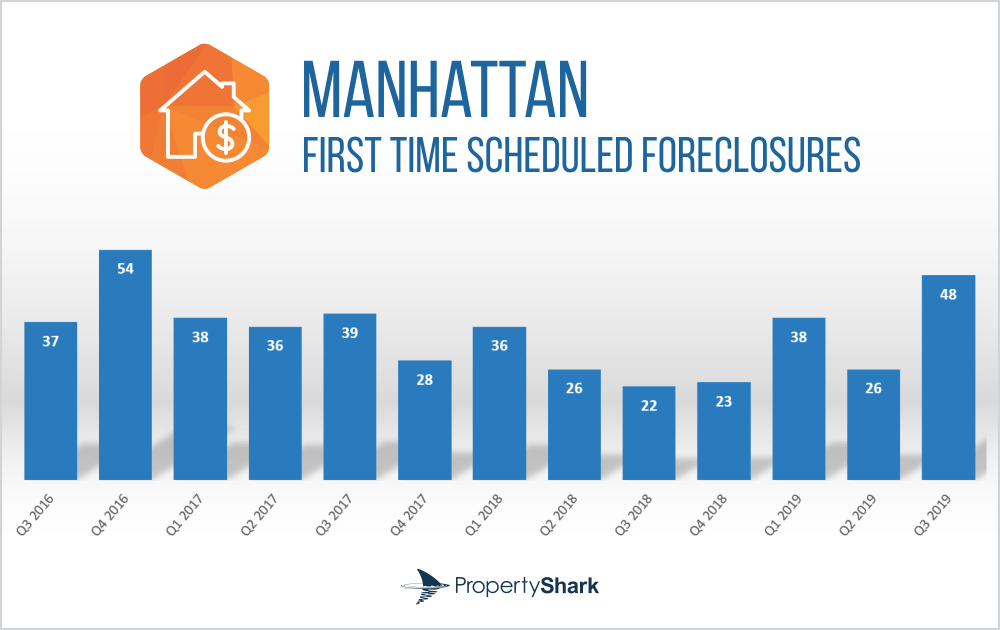 Brooklyn first-time foreclosure cases dropped 2% year-over-year. A total of 199 residential properties entered the foreclosure process for the first time in the borough in Q3. Brooklyn saw a 16% dip in cases quarter-over-quarter.

The most foreclosures occurred in the 11236 zip-code, which consists of Canarsie, Flatlands, Marine Park, Mill Basin, and Bergen Beach neighborhoods. 32 properties headed to the auction block in this zip-code. 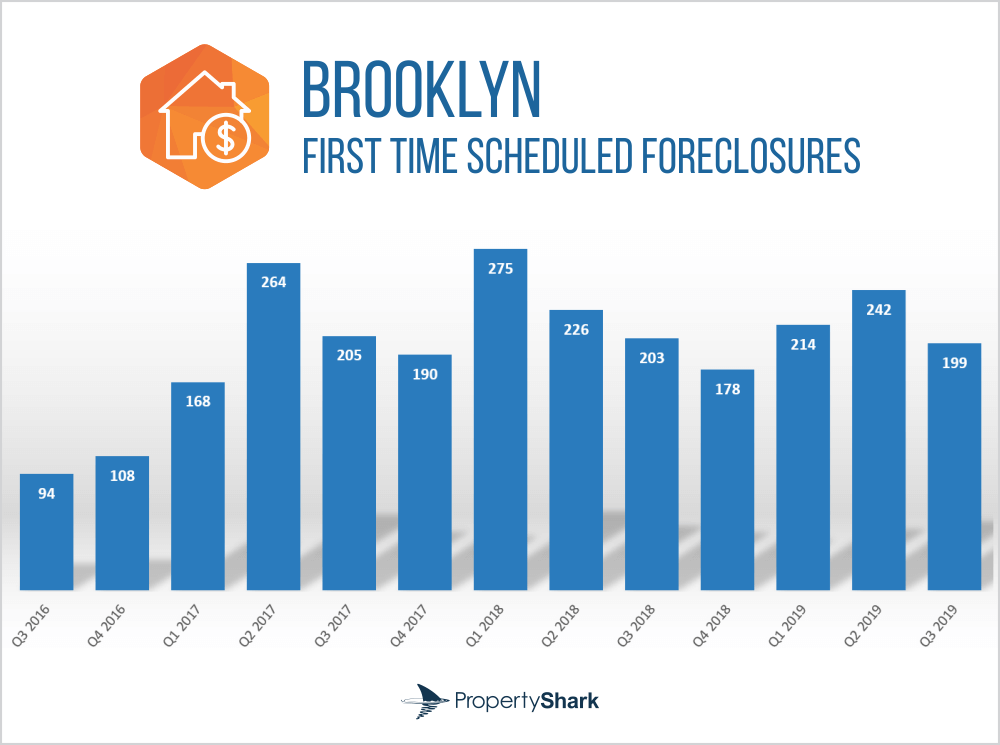 Queens still had the most foreclosures among the 5 boroughs in Q3 2019, with 272 properties hitting the auction block. Even though with the largest number of unique foreclosures, the borough saw a 16% decrease compared to the same time period last year. Q-o-Q, cases dropped by 16%.

The 11434 zip-code, encompassing Jamaica, South Jamaica, Rochdale, and St. Albans neighborhoods, had 23 new foreclosure cases—the most in the borough.

A total of 720 lis pendens were registered in Queens— dropping 13% in year-over-year. Quarter-over-Quarter Queens saw a 24% dip in pre-foreclosures. 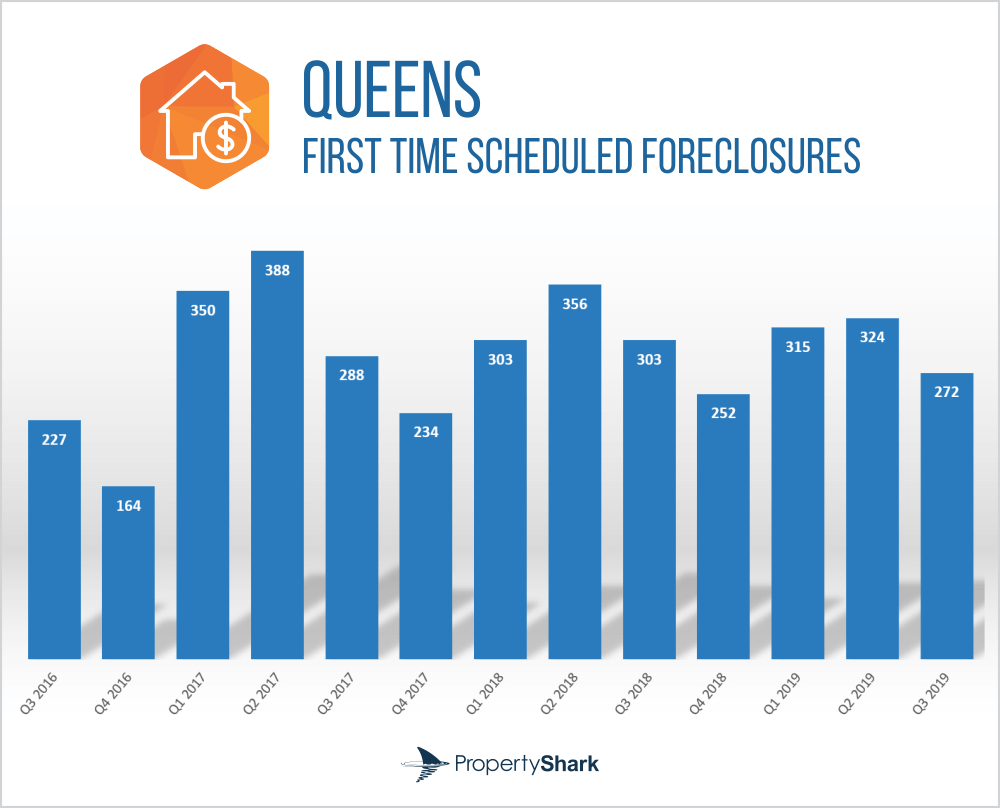 Foreclosure activity in the Bronx has gradually dropped since 2018. Year-over-year only 68 properties headed to the auction block for the first time, a 51% decrease year-over-year. Q-o-Q, foreclosures decreased 29%.

Staten Island cases went from 48 unique cases in Q3 2018 to 136 in Q3 2019, a staggering 183% increase year-over-year. This is due, in part, to the high number of pre-foreclosures registered in the third quarter of 2018, of which, some gradually became foreclosed properties.

Zip 10314 which encompasses Mid-Island had the most first-time cases—20.

Lis pendens in the borough increased 13% year-over-year to 353 and dipped 24% quarter-over-quarter. 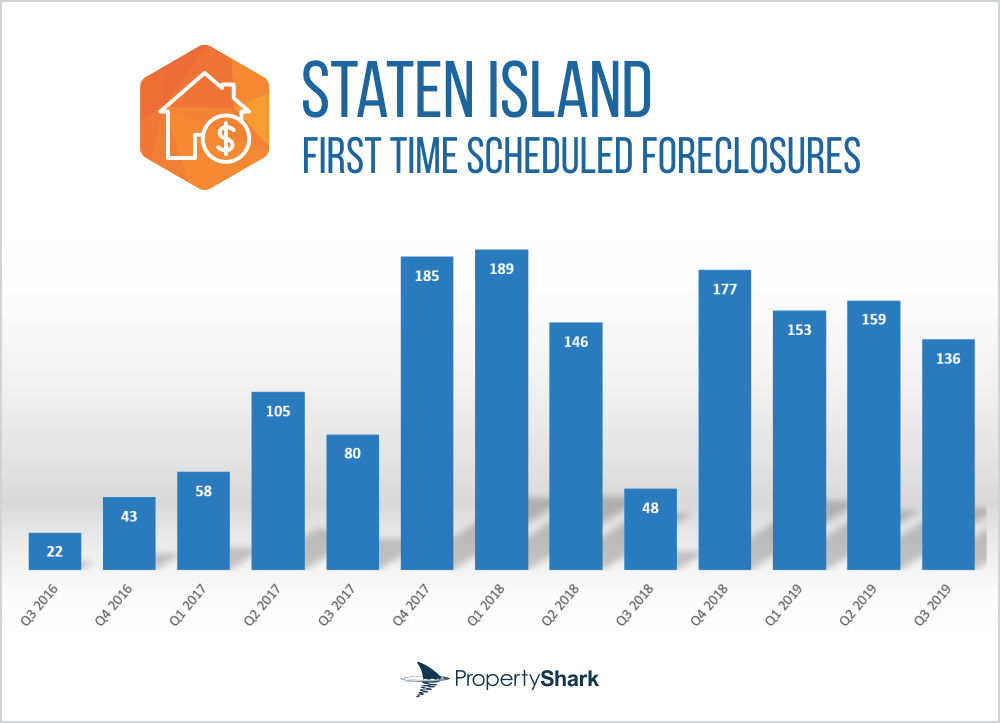 New York City lis pendens cases are up 4% year-over-year, having a total of 2,391 properties in the pre-foreclosure process in Q3 2019.

When it comes to borough-level activity, lis pendens increased everywhere except Queens. Manhattan led pre-foreclosure activity with a 19% surge, followed by Bronx and Staten Island. Brooklyn had a 10% lis pendens increase, while Queens saw a 13% dip.

Brooklyn had a total of 856 properties in the pre-foreclosure stage in the third quarter of 2019, Queens 720, and Staten Island 353. 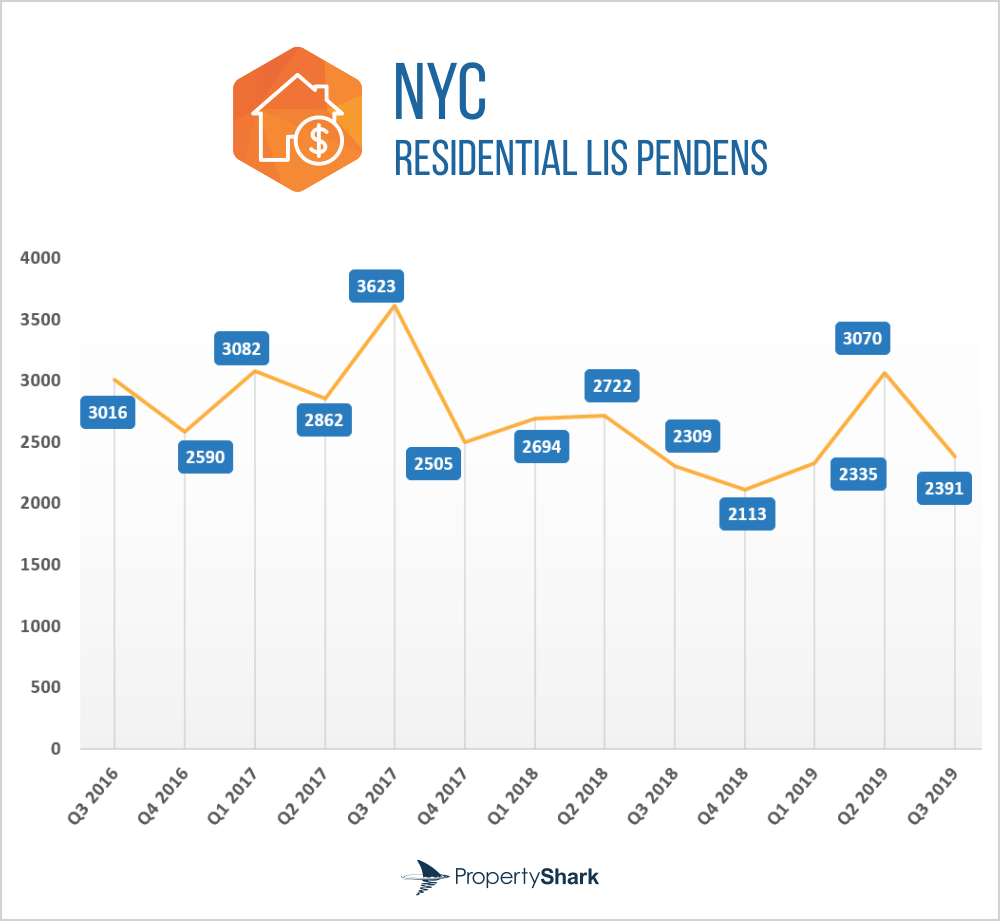 Having tracked foreclosure listings for over a decade, PropertyShark is the only service in New York that guarantees 100% coverage of the local foreclosure market. The stats include only first-time foreclosures to avoid over-reporting the number of distressed properties in the city, as auctions are frequently postponed and rescheduled.

We report separately on lis pendens (pre-foreclosure) filings—legal notices which mark the beginning of the foreclosure process.

Our report focuses on residential properties (single- and two-family homes, condo, and co-op units) that were scheduled for auction for the first time in Q3 2019.

Pre-foreclosure data refers to unique properties that received at least one lis pendens filing in Q3 2019. This may be a first-time filing or a re-filing. The same building class restrictions apply, excluding co-ops. If more than 3 units were referenced on the same lis pendens filing, they were not counted in order to avoid counting entire buildings. Based on a list provided by the Department of Buildings, we’ve created a new map,… 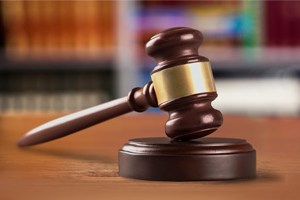 Note: This article was updated on July 7. The initial stats under-reported Q1 2017 foreclosure…