Nothing illustrates the inevitable end of 2018 more than the abundance of top 10 rankings and end-of-year charts sprouting up all over the internet—and we’re following suit. We recently published our 2018 priciest NYC neighborhoods study, and now we’re shifting our attention towards San Francisco.

We analyzed all residential transactions closed between January 1st, 2018 and December 14, 2018, and apart from the most expensive neighborhoods list, we also compiled a top 10 most expensive sales list (see table at the end of this article). The majority of the transactions were single-family properties, and there were almost no new developments that influenced price increases. In most of the neighborhoods—where prices did increase—they increased naturally.

As far as neighborhoods go, Presidio Heights is the most expensive neighborhood, with a whooping median home sale price of $4.5 million. Sea Cliff and Saint Francis Wood took the 2nd and 3rd positions, respectively.

Year-over-year, the top 10 section didn’t have huge changes, apart from Lone Mountain, which saw a 57.4% increase. There weren’t any radical switches in the top 50 either, most of the neighborhoods only trading places, with very few new entries. An interesting surprise was the Financial District not securing a position in the ranking this year, the neighborhood falling short of 5 spots, landing at #55.

Scroll down to see the full top 50 neighborhood list and the top 10 priciest residential sales list of 2018, and read on for additional neighborhood information.

The small neighborhood’s median increased to $4.5 million year-over-year, a 24.5% surge in home prices. A total of 40 residential transactions closed in Presidio Heights, the most expensive being a single-family home at 32 Maple St. The property traded for $18.5 million back in April. There were 3 additional sales above $10 million in the neighborhood.

At #2, Sea Cliff’s median home sale prices saw a 11.1% gain. There were only 11 transactions in the waterfront neighborhood, pushing prices up to almost $3.88 million. Most of the houses in this neighborhood are large, so the median price will inevitably remain pretty high here.

At #8, Lone Mountain median home sale prices surged 57.4% year-over-year to a median of $2.1 million. The neighborhood saw the largest increase in the top 50 list. 142 Ewing Terrace was the most expensive residential sale, trading for $3.4 million. Out of the total 16 sales, 10 had a price tag above $2 million.

Ingleside Terrace secured the 7th spot, with a median home sale price of $2.2 million. Year-over-year, prices in the neighborhood increased 25%, and a total of 15 residential properties traded.

Inner Mission landed at #50 on the list, with a median of $1.27 million. The Financial District’s median home sale price was $70,000 short of that, putting the neighborhood at #55.

Which Are the Top 10 Most Expensive Residential Sales?

The most expensive residential transaction was recorded in Pacific Heights. 2920 Broadway traded on the 5th of October with a price tag of $39 million. The second priciest home sale was also in Pacific Heights, 2900 Broadway changing hands for $32 million. All sales were above $10 million.

Median home sale prices were calculated based on residential property sales closed between January 1, 2018 and December 14, 2018. The residential properties included in the stats are single-family homes and condos. Package deals were excluded.

Eight-Figure Medians and Record-Breaking Deals – These Are 2018’s Most Expensive Neighborhoods in the L.A. Area

Key takeaways: TriBeCa remains the priciest neighborhood, with a median sale price of $3.85M With… 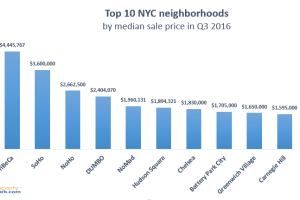 Despite rising prices in waterfront Brooklyn, it’s still highly unusual for any outer-borough neighborhood to…