Home to some of the hottest real estate markets in the country, Florida is no stranger to sky-high residential prices.  Low inventory levels are pushing home prices higher across the Sunshine State and sales volumes have increased in Q1 2017 compared to the year ago figure, while state unemployment levels have continued to drop.

Although the state’s real estate scene has become more and more a seller’s market, at the top end buyers are still in control. Florida’s luxury inventory expanded by 13.1 percent in 2016, as large amounts of inventory surplus came online (again). Prices in the luxury segment have continued to drop over the last year – a trend that is expected to gain traction well into 2018. Even Florida’s most expensive home for sale right now, the jaw-dropping Gemini estate, has had its whopping $195 million initial asking price slashed by $30 million recently.

With a median sale price of $3.4 million, Miami Beach’s 33109 is Florida’s #1 most expensive zip code. Located in the exclusive community of Fisher Island, 33109 also ranks as 4th most expensive zip in the country in 2016. A long-time chart-topper of expensive zip codes, Fisher Island is located on an eponymous barrier island, accessible only by boat. Once a one-family residence of the Vanderbilt family and later U.S. Steel magnates the Moores, the island was also partially owned by President Richard Nixon. Nowadays Fisher Island is home to stately mansions, a private marina, hotel and some high-end apartment developments. Residents have included Oprah Winfrey, Julia Roberts, Boris Becker and Mel Brooks and the island remains a popular real estate market with CEOs, financiers and ultra-high net worth individuals and families.

Sporting a median sale price of $1,290,000, Florida’s 2nd priciest zip code is 33921. It covers the exclusive island community of Boca Grande, located on Gasparilla Island, off of Southwest Florida’s Gulf shores. The highly exclusive and affluent community has been a haven for the rich and wealthy for decades now – Katherine Hepburn often retreated here to escape the media frenzy of Hollywood, joining influential families such as the Astors, Rockefellers and du Ponts on the island. Other notable residents include George H. W. Bush’s family, Henry Ford, Thomas Edison and Harrison Ford.

With a year-round population of 1,700, the island is also a coveted snowbird destination, as well as a summer holiday hotspot for high-end travelers. The charming Old Florida town is home to a bevy of stately mansions and historic structures. In fact, the entire island is under the protection of the Gasparilla Island Conservation District Act, which bans buildings taller than 38 feet. A fishing hotspot, the island has some of the best tarp fishing in the world. Furthermore, in 2016 a local conservation group purchased 30 acres of waterfront property – the $20+ million holding will raze all existing structures and convert it into a nature sanctuary.

Located just one mile from Miami International Airport, Doral is home to 33122, the 3rd most expensive zip code in Florida in 2016.  Homes here trade for a median $1,094,100. One of the fastest-growing cities in South Florida, the resort town of Doral is considered one of the most livable cities in the U.S., thanks to its excellent weather and great cost of living. Boasting world-class golf courses, and easily accessible from downtown Miami and Miami Beach, Doral’s many shops and restaurants pamper both year-round residents as well as tourists and snowbirds. But Doral isn’t just a lifestyle destination – the city also has a vibrant financial and business sector as well.

Home to some of the most luxurious real estate in the country, a picture of Florida’s most expensive zip codes wouldn’t be complete without also taking a look at the largest residential transaction of 2016. Located at 3551 Main Highway, Coconut Grove, the 6.9-acre estate built in 1920 and known as La Brisa traded for a whopping $34.6 million back in late June of last year. Initially listed for $65 million in 2014, the luxurious estate was bought by neighbor Ransom Everglades School.

The sale is considered the highest price ever to be paid for a home in Coconut Grove and one of the top 10 most expensive residential transactions in the history of Miami-Dade County. The waterfront estate features a 16,500-square-foot Mediterranean main residence, a 2-bed Key West-style guest cottage, lush landscaping and an observation deck with ocean and Biscayne Bay views.

Check out the most expensive zip codes in Florida below:

Methodology:  In order to determine which were the most expensive ZIP codes in Florida, we looked at all residential transactions closed in 2016, taking into account condo, co-op, single- and the two-family homes. All package deals were excluded.

US Homes Keep Getting Bigger: What Does This Mean for Our CO2 Emissions? 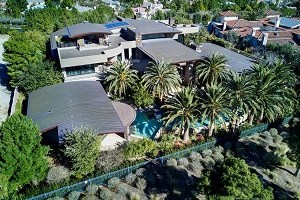