To better understand the difference in attitude between Gen Z, Millennials and Gen X towards homeownership, intergenerational living and saving for a down payment, PropertyShark conducted a generational survey on their preferences.

Like other economic sectors, the real estate market changes with the emergence of each new generation. Born after 1995, Generation Z may be similar to their Millennial siblings in terms of preferences for large urban centers, communal amenities, social media and smart appliances, but when it comes to housing, major discrepancies appear. Raised by the cynical Gen X in a connected world with significant social, political, economic and environmental challenges, the first fully digital generation in history sees homeownership as a long-term investment and safety measure.

Millennials may be the largest category of homebuyers right now, but half of the Americans born between 1980 and 1995 still rent – just as many as their younger Gen Z peers. Burdened with the highest levels of student debt in history, Millennials who aspire to own their own place have been locked into the rental market far longer than previous generations.

This in turn has been pushing rental rates to the highest they’ve ever been – a boon for multifamily investors, but that rent burden coupled with college debt continues to keep many Millennials from saving enough for a down payment.  In fact, 70% of Millennial respondents name one of these two reasons as the main roadblock towards saving for a down payment. An additional 16% consider credit scores the top reason.

Similarly, a third of Gen Z – many of whom have yet to graduate from high school – also see college debt as a major barrier towards homeownership, with nearly one third worrying about saving enough for a down payment. Coming of age in a relatively healthy housing market, only a few Gen Zers consider increasing home prices as the top hurdle towards homeownership (4%), while a third view credit scores, economic factors or job insecurity as the main barrier.

By comparison, 21% of Gen Xers see credit scores as the biggest hurdle towards homeownership, and a third named rising home prices and the economy the #1 roadblock. Student debt is a deciding factor for only 7% of Gen X respondents. It’s also notable that worries about keeping up with high property tax costs, especially in pricey states like New York, did not make the list of major concerns for either generation.

Whatever they may see as the most significant hurdle towards homeownership, more than 80% of respondents from all three generations expect to buy a home in the next 5 years. Part of more established family units and with stabilized careers, Gen Xers are the least likely to buy homes in the near future, while Millennials are the most likely – 87% of Millennial respondents expect to enter homeownership within 5 years.

Considering that the oldest of Gen Z are barely 23, it is noteworthy that a whopping 83% see themselves entering the real estate market within 5 years. Of course, the high numbers of the Instagram Generation who see themselves becoming homeowners in the near future may be attributed to youthful optimism and lack of knowledge, but that’s not necessarily the case. Currently, the homeownership rate of Gen Z stands at about 100,000 individual households led by this cohort. And, of these, only 1.2% are more than 60 days late on their mortgage payments according to MarketWatch. That’s less than the 1.6% of Boomers and Millennials who are late with their payments and the 2.3% of Gen X mortgage holders who are running behind.

Millennials have the least positive outlook on homeownership

Despite this, about 40% of all respondents have less than $10,000 saved, while nearly 1 in 5 Gen Z and Gen X consumers have nothing saved. The same holds true for 15% of Gen Y. At the same time, 16% of Millennials expect they’ll need to save for between 5 and 10 years to afford a down payment, and only 11% of Gen Z expects the same time.

Millennials’ jaded attitude is also evident in their expectations of home size. Gen Y is the most realistic generation when it comes to square footage versus pocket size – they dream of homes 1,884 square feet in size, but report being able to afford 1,071 square feet less. For Gen X, the discrepancy between what they want and what they can afford grows to 1,142 square feet. While Gen Z can afford just a little bit less than Millennials – 803 versus 812 square feet – they’re dreaming of homes 1,278 square feet larger.

Millennials may have popularized tiny homes and micro apartments, but Gen Z is dreaming big. The Instagram Generation hopes for homes 2,081 square feet in size on average, 200 square feet larger than their Millennial counterparts. Furthermore, space takes center stage for those born between 1995 and 2010.

When asked what they would be willing to compromise on when buying a home, space was the least likely aspect for Gen Z respondents to give up. This is understandable, considering that the overwhelming majority of this generation grew up in larger homes than any before, with many never having shared a bedroom. Furthermore, those that have moved from the parental home into rentals are mostly forced to share living space with roommates and want a return to more space and privacy.

While Millennials prize location above anything else – still keen on living the 24/7 lifestyle –, Gen Z would sacrifice location and an easy commute for space and amenities. For Gen Z, nearby entertainment options rank significantly higher than living close to friends or convenient access to green spaces. Then again, they are the first fully digital generation in history, used to the instant gratification of the online world, growing up mostly indoors and used to communicating with friends via devices as much, if not more, than through face-to-face contact.

This digital fluency also means that Gen Z prizes smart appliances and smart homes just as much as Gen Y. Considering the youth of Gen Z, the importance of smart systems is likely to increase as more of their cohort enters the housing market.

Although very aware of climate challenges, Gen Z still prizes parking space far more than energy efficiency in a home, quite the opposite of Millennials. In fact, even Gen X prizes energy efficiency more than Gen Z. Another significant shift in attitudes towards housing is evident in the diminished importance Gen Z gives to home offices.

While professionally established Gen X and start-up savvy Millennials consider home offices fairly desirable, Gen Z would rather have a home gym instead. After all, this is the first generation to grow up in the public eye, and effects of heavily curated social media presences, especially on visual-centric mediums like Instagram, have increased the importance of personal appearance and body consciousness.

The arrival of Millennials into the housing market ushered in a renaissance of urban living, and while starting families or more affordable prices have brought many back to suburban living, 40% of Gen Y remains set on city life – the highest percentage of any generation.

Gen Z however has an affinity for suburbia, with nearly 60% preferring it, followed by urban living with 30%. Paired with Millennials’ shunning of rural and small-town life, all signs point to the continued urbanization, while rural and small-town communities continue to thin out and vanish. By comparison, a quarter of Gen X respondents named rural living as their #1 choice.

Similar to Millennials, New York City remains a top destination for Gen Z, but Los Angeles becomes even more attractive, as does California overall. By comparison, L.A. does not appear among Gen X homebuyers’ top 10 choices.

Gen Z’s commitment to homeownership shows the most similarities with an unexpected pre-cursor: their great-grandparents, The Silent Generation. Like their great-grandparents, born during the Great Depression and World War II, Gen Z was born in times of economic and political turmoil in the form of the Great Recession and the post 9/11 conflicts. As such, the economic stability and the security offered by a home are appreciated more by these generations – although Gen Z wants its real estate investment loaded with amenities.

However, Gen Z will sacrifice space for amenities, if necessary. Moreover, Gen Z is prepared to cut back on amenities too, if it means reduced housing costs, most likely because of the hardships observed among older siblings or even parents during the recession years. This would make co-ops an attractive option for them, especially in NYC, their second-most popular destination to move to. This financially savvy generation is more willing to take on fixer-uppers as well, viewing the home-buying process as a learning experience at this age.

In fact, nearly half of our youngest respondents paid less than $10,000 as a down payment, compared to 31% of Millennials and 28% of Gen X. An additional 41% of Gen Z spent between $10,000 and $50,000, with only 12% investing more than $50,0000 on a down payment.  It is also noteworthy that a whopping 93% of Gen Z buyers saved for less than 5 years for their down payments. The cheaper homes Gen Z gravitates to is one explanation for the speed with which Gen Z buyers managed to save, while help from parents is another.

With the eldest Gen Zers at 23, buying a home at this age is a decision likely to be supported and subsidized by parents. Additionally, Gen Z views homeownership as the most important part of the American dream, with more than three quarters ready to sacrifice running their own business in favor of owning their own home.

Living at home is all about practicality for Gen Z

While the stereotype of the adult Millennial child living with their parents may still be prevalent in public discourse, few of this generation actually still do. Of those that are cohabitating, 44% are doing so because they can’t afford to rent on their own, and a third are saving up before leaving the parental home. Unfortunately for Millennials, close to a quarter have nothing put aside for this purpose, while another quarter have less than $1,000 saved for moving out.

Comparatively, only a third of Gen Z respondents living with parents do so because they can’t afford to rent on their own, while 40% of this group choose to live at home to save up. In fact, nearly 15% of Gen Z who lives at home could afford to move out, but finds it easier to live with family. Overall though, few Gen Zers or Millennials live with family members to help care for them, while 1 in 5 Gen X respondents who live with their parents say they do so for this reason.

For this study, we surveyed 2,134 U.S. renters, owners and people living with family via Amazon’s Mechanical Turk. The respondents were asked individual questions about savings, home ownership, amenity and community preferences, as well as some demographic data such as employment and marital status. Our survey sample size has a 3% margin of error and a 99% confidence level.

Gen Z’s affinity for large metros and their preference for amenities like gyms over home offices, this generation could benefit greatly from coworking spaces. Luckily for this generational cohort, the New York City coworking and Los Angeles coworking markets are the largest in the country, lining up with their location preferences.

Jessica Silver from CORE: Your Sphere of Influence Will Be Your Biggest Asset in the Beginning 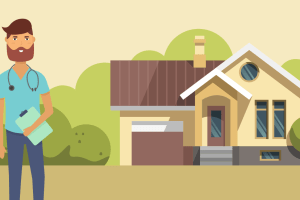 Key Takeaways: Kenilworth’s 60043 leads as the only zip with a median greater than $1…