There comes a time when you realize that your spacious dream home takes up too much space and its upkeep is becoming both unsustainable and unnecessary. Downsizing can be an appealing option when certain rooms have transitioned into little more than costly storage spaces that need heating, cooling and cleaning. As you start getting near your retirement years and the house gets emptier, you may be considering getting a smaller place.

The upside of a downsize is that you’ll be cutting on housing-related expenses, you’ll get to save the extra cash from selling your previous home, and you’ll also be freeing up space for the younger generation. If you’re young, downsizing isn’t always about saving money. You can move from a three-bedroom to a two-bedroom residence and pay similar housing costs just to be closer to the city center.

Here at PropertyShark, we decided to conduct a study on how much money can people save when downsizing in California’s 20 largest cities by population. We calculated the median sale prices of homes ranging from one to five bedrooms in each of the cities and determined how much money one could spare by cutting back.

Los Angeles isn’t the most expensive city in California, but it ranks first in terms of saving the most money if you downsize by one room. The median sale price of a 5-bedroom home is $1,475,000, while for a four-bed house you’ll pay $880,000. By transitioning from the former to the latter, you’d manage to save around $595,000.

If you decide to sell your 5-bedroom LA house and move to a 3-bed Long Beach home, for example, you could save up to $817,000. Moving from a 4-bedroom home in Irvine—where the median sale price is higher compared to LA—to a 3-bedroom residence in Los Angeles, will end up saving you at least $307,000. 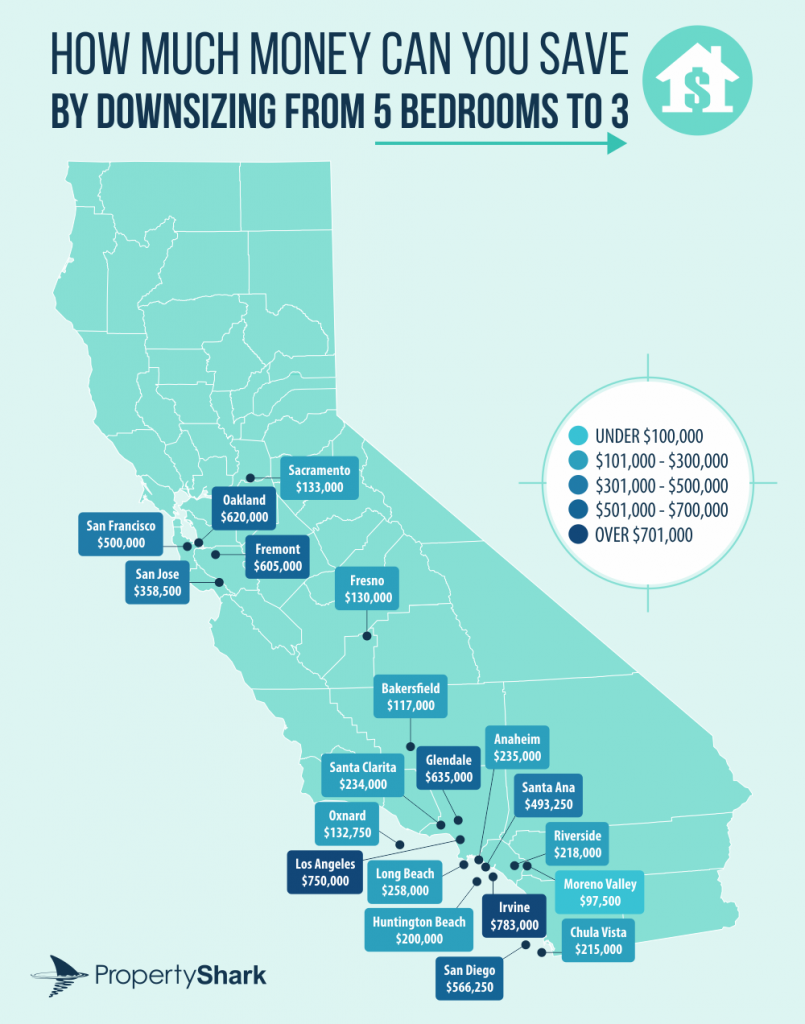 Selling a five-bed and buying a four-bed in California’s second largest city would land you with $390,250 extra, while going from a five-bedroom home to a three-bedroom could save you up to $566,250.

Silicon Valley homes are known to be among the most expensive in the nation: a five-bedroom home in San Jose has a median home selling price of $1.3 million. By cutting a five-bed down to a three-bedroom home, you’d manage to save up to $358,500.

Downsizing by only one bedroom, especially from four to three or three to two, you would economize $136,000 and $147,500, respectively. A few miles north, in San Francisco, doing the same thing can save you twice as much money. 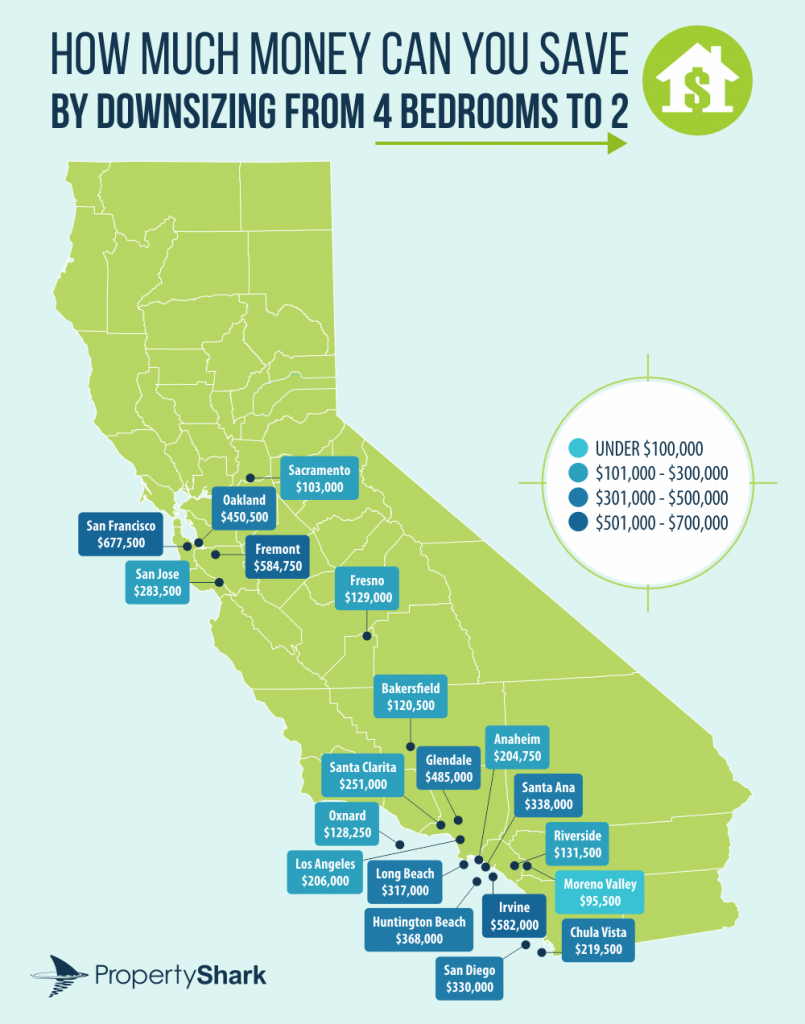 In California’s most expensive housing market, you can save the most money by downsizing from a two-bedroom home to a one-bedroom residence. With two-bedroom apartments in San Francisco having a median sale price of $1.3 million, giving up one room could save about $461,000.

Selling a four-bedroom home and buying a two-bedroom residence would save you a whopping $677,500, roughly the amount you’d save in Oakland if you’d downsize from a five-bedroom to a three.

Take a look at the table below to see how much money you can save by downsizing in each city.

People usually downsize when their house is slowly becoming a burden. Before committing to moving, it’s important to do a lot of research and reflection first so that when it comes time to sell, you know you are comfortable with your decision. There are a lot of factors to take into consideration, and one of the most important ones is not treating downsizing as an investment, but rather as a new home that fulfills your needs.

Property taxes and other spendings are not included in our calculations. It’s worth mentioning though that a recently proposed voter measure in California will potentially allow homeowners age 55 and older to sell their home without a significant property tax hit.

The California cities included were the top 20 largest by population, excluding Stockton, San Bernardino, Modesto and Fontana, where we didn’t have updated sales data.

Foreclosure of the Week: Philip Starck Condo Goes to Auction with $241K Lien

Two months after the COVID-19 pandemic placed nearly all industries on hold, many financial markets…

Key takeaways: Hudson Yards enters the list as the 2nd most expensive NYC neighborhood in…

The average home in New York City (all the five boroughs) is 1,124 square feet, which places the Big Apple at the bottom of the list of 20 cities in the U.S. Home owners in Washington D.C. and Atlanta enjoy almost twice as much space as New Yorkers.