Ridesharing giant Lyft has inked a 100,638-square-foot lease at Hudson Commons, a creatively-repositioned Manhattan office tower located at 441 Ninth Avenue. The company will join Peloton, which signed a 312,200-square-foot lease here in November. The building, which is now 63 percent pre-leased, is expected to be delivered this summer.

In December 2016, Cove Property Group together with Baupost Group purchased the eight-story, 423,000-square-foot building at 441 Ninth Ave. from Emblem Health for $330 million. Under the new ownership, the property has been expanded to a 28-story, 700,000-square foot tower and rebranded Hudson Commons. Keeping up with the expectations of today’s office tenants, the redevelopment will feature floor plates with 14-foot ceiling heights, floor-to-ceiling windows, terraces on nearly every level, open floor plans, and modern tech amenities.

“At Hudson Commons, each floor possesses an individuality created through the combination of size, layout or outdoor space that disrupts the traditional vertical rent/view/experience hierarchy of an office building,” said Kevin Hoo, Managing Partner at Cove.

Following the Lyft and Peloton leases, only 253,000 rentable square feet of office space remain available in the newly-constructed tower. Asking rents at the property are above $90 per square foot, The Real Deal reports.

“Hudson Commons is one of the most innovative development projects that we have been associated with,” said Siegel. “We are excited to continue on with the leasing of the tower floors which are all highly desirable new construction floors with panoramic views.”

Alexandra is a staff writer and communications specialist at CommercialCafe, covering commercial real estate trends, news and tips. Her work can also be found on the PropertyShark blog, where she usually writes about the latest office deals. Alexandra’s articles have been featured by Bustle, NBC Washington, Thrive Global, the Boston Business Journal, The Durst Organization, Philly Mag, HR Dive.
More

What properties contribute the most to New York City’s tax revenue stream? 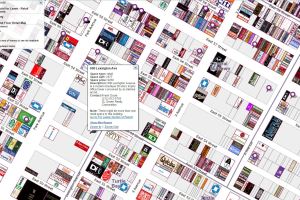 The NYC retail market, challenged worldwide only by the Hong Kong market, has always done fabulously…

It seems intuitive that the more amenities something offers, the higher the price tag. A…

With 2015 just around the corner, we thought it would be instructive to look back…