Once dubbed the “Park Avenue of the Middle Class”, the Bronx’s Grand Concourse has become something of a phenomenon ever since the thoroughfare opened in 1909. Fast-forward 110 years, and the desire to live here has become greater than ever. The elevated housing demand in the neighborhoods around the boulevard pushed the median home sale price to increase 68% in just 5 years—from 2014 to 2018.

Resembling Paris’ own Champs Élysées due to its grand scale, Art Deco buildings and contemporary architecture “The Grand Concourse is like Paris, but with a subway line straight to Midtown,” according to PropertyShark Founder Matthew Haines. But the boulevard is so much more than just a gateway from the Bronx to Manhattan and a comparison to the Parisian street. The Concourse is brimming with years of NYC history, culture, art and life, and is finally getting the attention it always deserved.

More and more people priced out of the other boroughs are moving to the Bronx and choosing neighborhoods along the Grand Concourse due to the convenient access it offers to Manhattan. “The hottest neighborhood in Harlem is The Bronx,” as Matthew Haines likes to put it. In Mott Haven, for example, the median home sale price in 2018 reached almost half a million dollars.

Some of the areas along the thoroughfare have already started gentrifying—notably South Bronx neighborhoods—and as time goes by, those further up north could be next. Curious to see how much people have been paying for housing near the Grand Concourse in the past 5 years, we looked at the evolution of home prices in the neighborhoods adjacent to the street, all the way from Mott Haven to Bedford Park. In Mott Haven, home prices surged a whopping 124% in 5 years to $448,916, way above the Bronx’s $292,250 median. In addition, two neighborhoods saw an increase of almost 80%.

The neighborhoods we looked at were Mott Haven, Concourse, Concourse Village, Fordham and Bedford Park. Due to the lack of residential transactions, Mount Eden and Mount Hope were excluded from the study. For the other five neighborhoods, we calculated the median home sale price in each year from 2014 to 2018, and we also included a couple of homes that are currently on the market in 2019. 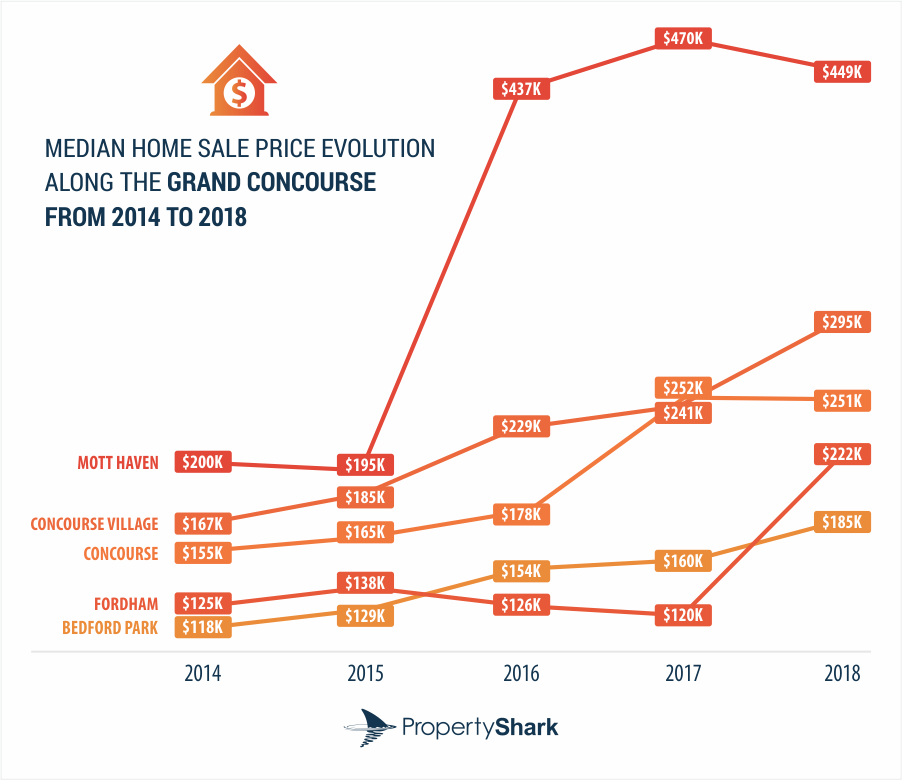 Mott Haven has become a prime destination for homebuyers that cannot afford to live in Manhattan and are also priced out of Brooklyn and Queens’ rapidly gentrifying neighborhoods. Investors have taken notice, and supply coupled with demand made home prices skyrocket over the past few years in the waterfront neighborhood.

Most of the residential sales in 2014 and 2015 were co-ops and condos, and starting from 2016, a large number of single-family homes changed hands. This also added to the neighborhood’s median home price spike.

With Concourse also being among the closest Bronx neighborhoods to Manhattan, it’s no wonder prices have been increasing at an accelerated rate here, as well. Concourse was always a great point of interest in New York City, the neighborhood being home to the Yankee Stadium, Bronx Museum of the Arts and the Bronx Courthouse, appealing not only to residents but tourists alike.

Although 10 years ago new residential development was pretty much flat, investment activity really picked up after 2015 as over 700 affordable and market-rate units were added in 2016 and 2017. 2015 was also the year Starbucks opened up shop in Concourse, an event that some say marked the first sign of the neighborhood’s gentrification.

Concourse Village has an authentic NYC feel to it, with plenty of bars, restaurants, coffee shops, and parks. The crime rate has dropped over the years, and public schools in the neighborhood have an above-average rating.

A Bronx neighborhood along the Grand Concourse that houses the third oldest university in New York and is within close proximity to both The Bronx Zoo and The Bronx Botanical Garden offers appealing investment opportunities for real estate developers, investors and home buyers alike.

Currently, the most expensive listing in Fordham is 2677 Bainbridge Avenue, an 8-bed, 4-bathroom single-family home listed for $628,000.

Located in northwestern Bronx, Bedford Park is a quiet, suburban neighborhood with plenty of green space and exceptional transportation options. Although being the furthest neighborhood from Manhattan along the Concourse, taking the D subway line can get you straight to Midtown in about 40 minutes.

The median home sale price in Mott Haven, Concourse, Concourse Village, Fordham and Bedford Park was calculated in every year from 2014 to 2018 (5 years).

Although located along the Grand Concourse, Mount Eden and Mount Hope weren’t included in the study due to low volume of residential transactions which weren’t enough to reflect the accurate median home sale price in the neighborhoods. 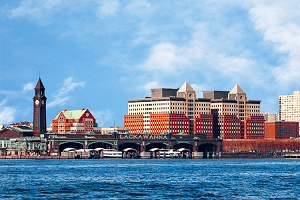 As New York becomes increasingly pricey, a growing number of buyers are looking for homes…