Metro L.A.’s real estate market remains among the most exclusive nationwide, with two of its neighborhoods posting median sale prices above the $10 million mark last year. Curious to see which towns and cities had shown the most dynamic price evolution in the past five years, we analyzed all residential sales closed between 2014 and 2018 in 67 towns and cities in Orange and Los Angeles counties.

One of the most immediate findings was the relentless price growth that dominated the area. 64 of the 67 analyzed markets recorded positive growth, and half experienced a median sale price gain of 20% or more in only five years.  Of these, 10 markets actually saw their medians surge by 30% or more, three of which jumped more than 40%. Inglewood and Culver City, in particular, set the bar high: Culver City’s median sale price surged 60% between 2014 and 2018, while Inglewood went even further with a 63% expansion.

Overall, Los Angeles County dominated through top price gains, securing seven of the 10 most dynamic price surges. Orange County, on the other hand, was the setting for the only three markets where the median sale price contracted between 2014 and 2018. But, the losses observed in the medians of Brea, Laguna Beach and Silverado were negligible, dipping no lower than -4%.

All in all, sales activity slowed in 34 of the 67 towns and cities we reviewed. Only 15 markets saw sales activity grow 10% or more; of these, only Lake Forest, Ladera Ranch, Irvine and Costa Mesa closed 20% or more sales in 2018 than in 2014. Lake Forest also made a name for itself – along with Yorba Linda – for spectacular growth in the median home size, which was up 67% in both locations. At the same time, the number of luxury markets rose – from 11 locations with medians of $1 million and above to a total of 18. 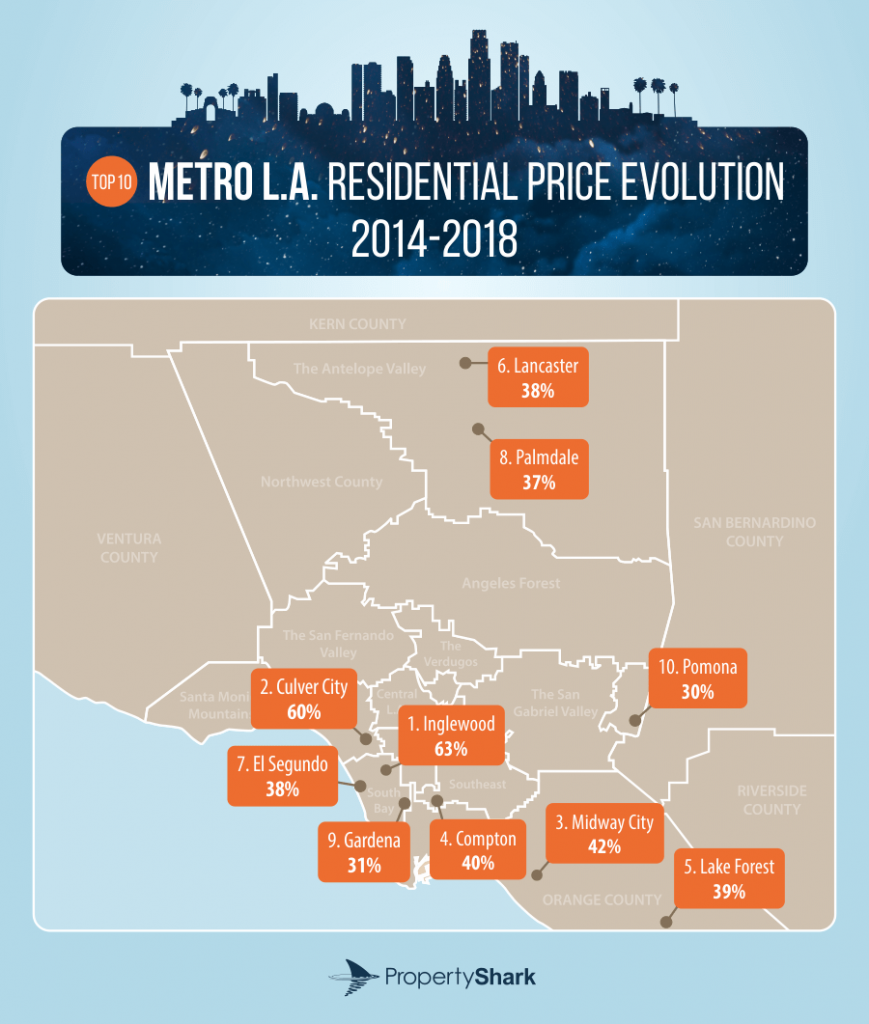 Metro L.A.’s most dynamic price expansion actually took place in a non-luxury market. Inglewood’s median sale price went from the high $200,000s in 2014 to $485,000 in 2018 – registering an impressive 63% gain. While the median size of an Inglewood home went virtually unchanged, the median price per square foot surged 61%, hitting $367/square foot in 2018.

But, this wasn’t the biggest expansion in price per square foot between 2014 and 2018. That top evolution was secured by Palmdale, where its 2014 median of $155/square foot jumped 69%. From a median sale price perspective, Palmdale’s evolution was the eighth-most dynamic in Metro L.A. at 37%.

Culver City was also hot on the heels of Inglewood, with a 60% price gain between 2014 and 2018. This resulted in a more than $400,000 gain in its median sale price, pushing Culver City up to a 2018 median of $1,150,000. It also marked the second-highest gain in sheer dollar amount. Additionally, Culver City increased in the price-per-square-foot category, as well, with a 61% rise – the fifth priciest in the area.

Compton also experienced massive pricing shifts in the past five years. A 40% upsurge resulted in a $352,500 median sale price. At the same time, sales activity slowed by 28%.

City of Los Angeles Closes Most Sales for 25% Median Increase

Although no Metro L.A. analysis would be complete without detailing the City of Los Angeles’ evolution, L.A. did not distinguish itself in any other metric than sales activity. But, closing the largest number of sales – nearly 16,000 in 2018 – among all Metro L.A. markets is to be expected from what is the largest and most populous market here. From the perspective of price growth, L.A.’s median price per square foot gained 24% over 2014 levels, while its median sale price jumped 25%, increasing $172,954. The median home size remained unchanged.

Looking at Metro L.A.’s residential price evolution from a dollar perspective, Malibu leads comfortably, with an increase of more than $520,000 in its median sale price. That 24% expansion allowed Malibu to hold on to its position as the second most expensive market in Metro L.A, posting a 2018 median sale price of $2.75 million.

Malibu also saw significant growth in its median square footage, which was the third highest at a 38% expansion rate. This, in turn, put pressure on the median price per square foot, which slid 10%. However, at $1,240/square foot, this was the fourth highest in Metro L.A. in 2018.

Furthermore, Malibu was just one of 18 L.A. Metro markets that had medians above the $1 million mark in 2018 – a noticeable shift from 2014, when there were only 11. But, while Long Island’s luxury residential markets showed a homogenous trend of declining sales activity, Metro L.A.’s upper- echelon markets presented a much more fragmented picture.

For instance, Beverly Hills – the most expensive market in Metro L.A. at a $2,982,500 median sale price – was characterized by a 32% upturn in the median square footage and a 17% drop in its median price per square foot. However, the former metric still remained the fourth highest in the area.

Redondo Beach, another million-dollar market, experienced a similar trend of flattening price per square foot paired with spectacular increases in the median home size. In fact, Redondo Beach had the most vertical expansion of its median home size by far, ballooning 80% from 1,182 in 2014 to 2,132 last year.

Then there was Calabasas, playground for the rich and very famous, which had one of the weakest price evolutions in the area at only 9%. But, it boasted the largest median square footage of 2018 at 3,273 square feet, despite a modest 6% uptick. Still popular with high net worth buyers, it also had the eighth-highest median sale price at $1,445,500.

Check out the table below for the full picture of Metro L.A.’s residential price evolution:

For this study, we defined Metro L.A. as Orange and Los Angeles counties.

To determine the evolution of residential prices, we considered all residential transactions closed between 2014 and 2018 in 67 towns and cities in Metro L.A., taking into consideration single family homes, condo units and co-op units. All package deals were excluded. In order to have reliable price trend data, we set a minimum of 20 sales per year per location.

Overwhelming majority of 100 most expensive U.S. zip codes surge in pricing, with 10 at $4M+ and an additional 20 going climbing over $3M. 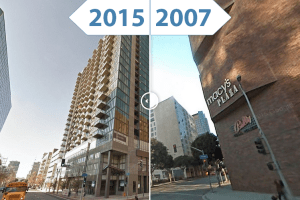 Has Los Angeles‘ skyline changed a lot since 2007? Judging from the before-and-after slideshows published…