The city’s most remarkable price expansion came from Brooklyn, in Fort Greene as median sale prices ballooned by a jaw-dropping 151%. Barely making the city’s top 100 priciest neighborhoods at #97 in 2016, the historic South Brooklyn neighborhood saw median sale prices jump from just $451,612, to $1,135,000 over the past 12 months, landing at #18.

Brooklyn maintained 2 neighborhoods among the city’s top 10 most expensive, even if median sale prices have started trending towards more established levels. Sales activity cooled off at several luxury developments which artificially inflated median prices in Q1, but other areas continued to experience fast-paced and high-priced sales.

Overall, Manhattan still holds the highest number of the city’s priciest neighborhoods with 24, with Brooklyn coming in a close second with 23, and Queens being home to 7. Manhattan, however, still dominates NYC’s top 10 most expensive neighborhoods, regaining two spots from Brooklyn from the previous quarter. 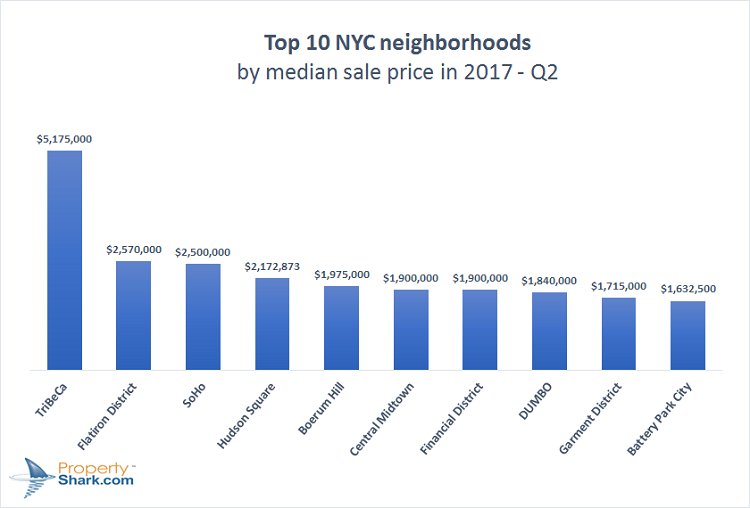 Following a rocky first quarter that saw prices slashed by 48% in Battery Park City, the southern Manhattan neighborhood bounced back in the Q2, with the median sale price clocking in at $1,632,500. Compared to the second quarter of 2016, the 71% price gain brought Battery Park City up from #27 to New York City’s top 10 most expensive neighborhoods.

With only 9 sales registered in the first quarter of this year, the Garment District has managed to lift up its median price to $1,715,000 – an almost $300,000 gain over Q1, when year-over-year price appreciation bottomed at negative 48%. The second quarter of 2017 however, pushed prices 8% over year-ago values.

One of only two Brooklyn neighborhoods in New York City’s top 10 most expensive neighborhoods, DUMBO gained 19% in median price levels in the second quarter compared to the same period in 2016. Quarter-over-quarter, however, DUMBO’s real estate market cooled off, stabilizing after a feverish first quarter for luxury sales.

Fueled by a wave of high-priced condo developments that hit the market in early 2017, DUMBO saw 55 transactions. Many of these were closed at luxury condo developments such as 51 Jay Street, where units range between $1 million and $6 million. In Q2, however, neighborhood sales activity trended towards more balanced territory, with 37 completed transactions.

Tying with the Financial District as NYC’s 6th priciest neighborhood, Central Midtown has made a comeback. After median prices slipped throughout 2016 and bottomed at $1,287,500 early this year, the second quarter saw sales activity double, pushing median prices up. In fact, Central Midtown’s new median is 41% higher than the year-ago figure.

Boerum Hill continued its rapid rise among the city’s priciest neighborhoods, climbing three spots quarter-over-quarter with an over $270,000 growth in the median price. Only the 46th most expensive New York neighborhood in early 2016, Boerum Hill saw a bevy of luxury condo developments go live, artificially inflating median price levels. Sleek luxury high-rises like The Boerum elevated the median sale price by 51% year-over-year, it clocked in at $1,975,000 for the second quarter of 2017, making this neighborhood Brooklyn’s most expensive.

Although still one of the most expensive neighborhoods in New York City, SoHo’s real estate market has been going through a period of stabilization. The city’s priciest neighborhood in early 2016 – with a median sale price above the $4 million mark – iconic SoHo’s median price weakened 22% year-over-year in Q2 2017, following a 17% year-over-year depreciation in the first quarter. The second quarter’s small increase in sales over Q1, however, didn’t stop SoHo from seeing the median sale price slide by more than $880,000.

Year-over-year, this neighborhood’s median price has expanded by 12%, making the dynamic Flatiron District the city’s 2nd most expensive neighborhood, despite somewhat weakened sales activity – 135 transactions in Q2 2017, compared to 152 in Q2 2016.  Once the playground of photographers thanks to cheap housing, the Flatiron District now boasts a $2,570,000 median sale price – up by close to $500,000 quarter-to-quarter. 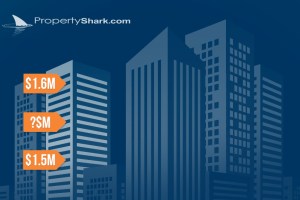