Looking at the numbers from our February 2009 Long Island Foreclosure report, it seems that while Suffolk has stabilized compared to the same month last year, Nassau Foreclosures are up 168%. Here are key takeaways from the report.

After 4 years in Williamsburg, PropertyShark.com officially moved to Manhattan today. The new office is…

Yardi Systems announced today that it has acquired PropertyShark, creators of PropertyShark.com, the premier real… 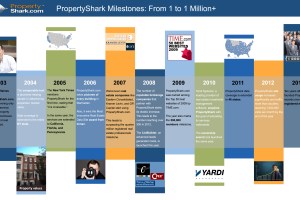 Ten years after PropertyShark.com was launched, we’re very happy to announce that we’ve passed the…