We recently released a study, first covered by Brownstoner, which revealed that Brooklyn condos are becoming increasingly appealing for Manhattan buyers, especially those priced at $1 million and above. The number of buyers of Brooklyn condos in the $1 million plus range coming from Manhattan increased by 53% in 2011 compared to 2010.  But what about the number of Brooklynites moving to Manhattan? Is this number even higher?

The answer is no – there are about 5 times more people from Manhattan buying Brooklyn condos than the other way around. Brooklyn buyers accounted for only 2% of the condo purchasers in 2011 in Manhattan above the $500,000 price range, and 1.4% in the $1M+ range. There were much more people from Long Island (Suffolk & Nassau Counties) – 4.1% – than from Brooklyn  who bought condos in Manhattan.

Home Sales in the Bronx at 5-year Lows; City Island the Borough’s Most Expensive Neighborhood 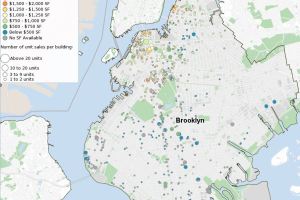 In Q3, 2015, Brooklyn continued to be a seller’s market. Buyer demand outpaced inventory despite…

U.S. investors turned their focus to the Swiss franc after the currency soared by 25…