In New York City, the real estate market is as hot as it has ever been. Whether it’s local or international buyers, everybody wants a piece of the Big Apple.

This huge demand for urban living has driven property prices up over the past 5 years, with the median price for a NYC home peaking at $505,000 in the third quarter of 2014, according to our latest NYC residential sales report.

NYC’s luxury residential market has eyes set in one direction only: up. The number of sales over $5M completed in 2014 climbed 26% from 2013.

The highest number of closed luxury sales was registered in Manhattan, where developers build for sky-high prices. There were a total of 757 home sales with prices above $5 million completed in Manhattan in 2014, up 25% from 2013. One57, the stunning Midtown skyscraper at 157 West 57th Street, contributes heavily to the soaring median prices in the luxury segment. Condos in this ultra-high-end building sell for top dollar, with the latest sale breaking the $100 million barrier. According to The New York Times, a 10,923-square-foot duplex penthouse at the pinnacle of the tower sold for a whopping $100.5 million, making it the most expensive apartment ever sold in NYC.

A pair of newly popular Brooklyn neighborhoods found their way into the top 10 priciest neighborhoods, while two perennial favorites – the Upper West Side and the Upper East Side – were pushed out of the top 10 list.

Another unexpected presence in the top 10 list, Columbia Waterfront District, recorded a spectacular jump in home prices. The median price in the neighborhood was $1,195,000 in 2014, which is 83% higher than the $654,636 median price recorded in 2013. This huge increase was partly due to the high selling prices of units in a boutique condo building at 255 Columbia Street. The 12 units in this upscale development that were sold in 2014 went for a median price of $1,272,813.

Care to see which New York City properties sold the most units in 2014? Check out NYC’s Top 10 Best-Selling Buildings here. 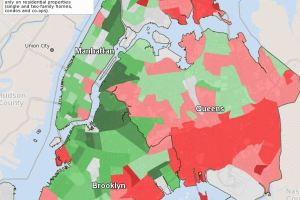 Everywhere we turn these days, the real estate headlines seem to announce the same thing: “Average…