Owning your home in the tough market of the 5 boroughs is no mean feat. In fact, according to a 2016 report by Citi and 2014 census data, the majority of New Yorkers will probably never achieve this. Today, only about 32% of New York residents own their home, half of the national average. While other things may factor in, one clear culprit is the huge cost of buying a home.

So high are the prices in New York that what qualifies as enough money to buy a home elsewhere in the nation, barely suffices to cover the down payment on one in this city. Obviously, there are dramatic differences between boroughs in terms of home prices, and therefore the median down payment needed to secure a loan also varies immensely – from $79K, on average, in the Bronx, to a staggering $500K in Manhattan. In fact, it takes $200,000 more to afford the down payment on the typical Manhattan home than it does to use your cash to buy the average American home.

Of those who bought a condo or a house in New York this year, 37% paid cash, according to our most recent study on the home-purchase mortgage market, covering Manhattan, Brooklyn, Queens and the Bronx. In Brooklyn, Queens and the Bronx the proportion of cash-only home sales stands at around a third of all transactions, similar to national trends. In contrast, Manhattan is the only borough to consistently see over 50% of all yearly condo and house sales closed without financing, despite the much higher prices.

The proportion of home purchases using financing in New York has kept relatively steady since 2012, fluctuating between a low of 59% in 2014 and a peak of 63% this year. In absolute numbers, mortgages taken to buy homes (excluding co-ops, which are not considered real property) have been climbing slightly over the past 3 years, to reach an estimated 17,668 by the end of 2016.

Manhattan stands out as the only borough with more than half of all home sales closed in cash. This means that 3,570 buyers, accounting for 55% of all home transactions in the borough, were able to pay the entire price of a Manhattan home up front. Meanwhile, all other boroughs recorded less than 40% all-cash transactions, and the national average stood at 33% in 2016.

Even though prices are far higher than in other boroughs, cash-only transactions are still more common since the market here often appeals to a different type of buyer. Many homes in Manhattan are bought either by individuals with more wealth and, therefore, less incentive to get tied to long-term credit payments, or buyers that purchase homes as investments – foreign individuals and companies looking to turn their assets back into liquidity should the market falter.

For the 45% of home sales that did secure a mortgage, the median down payment stayed nearly flat between 2012 and 2016, at 30-31%. These higher rates are due to the fact that most home loans in Manhattan qualify as jumbo loans, carrying higher down payments and loan requirements from banks.

Meanwhile, in value, the median down payment shot upwards by no less than $267,000 in the past 10 years, due to price hikes in the Manhattan market, and it’s now $500,000. To give you some perspective, the median home price in the US increased by $59,000 over this time, to reach $301,000 last quarter. So in Manhattan, the down payment alone is more expensive, and rises much faster, than the entire value of a home in most of America. 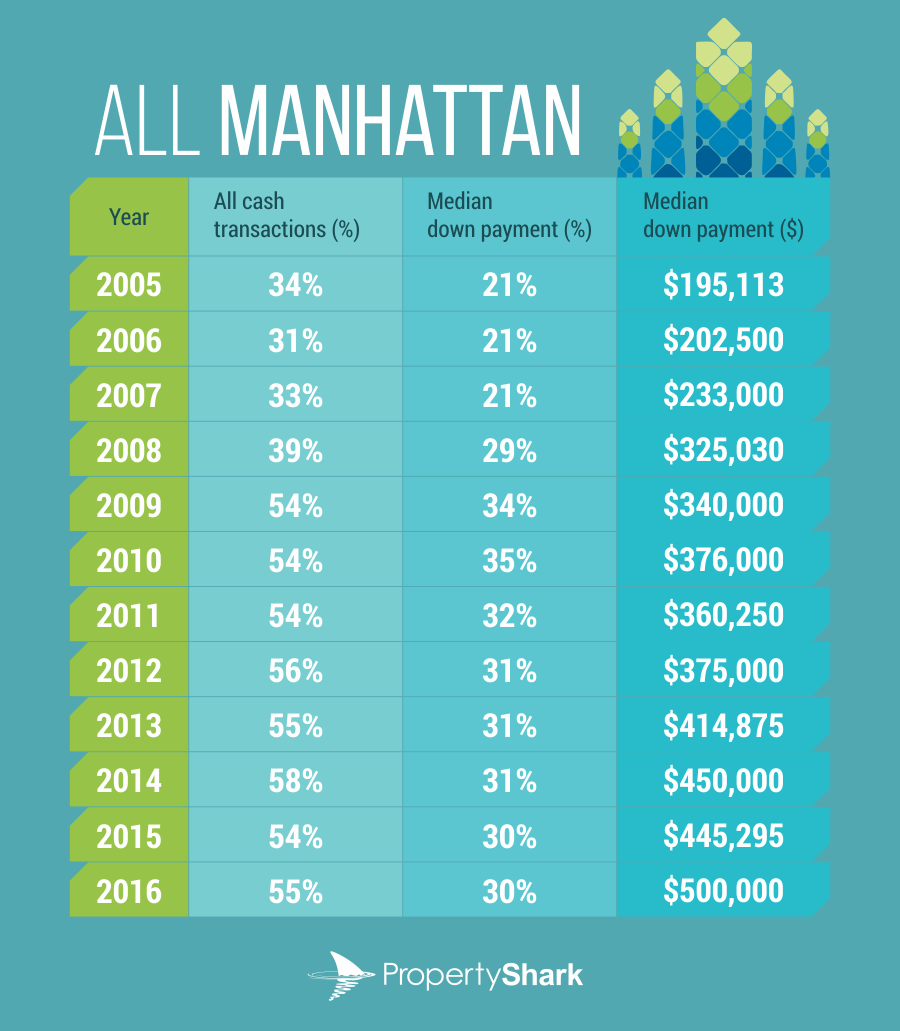 Rich buyers in Manhattan make high down payments – 38% or $3.15 million

On the other hand, luxury homes, those selling for $5M or more, were more frequently bought all-cash, with only 40% of luxury transactions involving a purchase loan in 2016. This percentage has gone up from a historical low in 2009, when only 27% of luxury home buyers in Manhattan took on a mortgage.

Despite prices on the luxury market being so high, a wealthy home buyer in Manhattan actually pays more, proportionally, on their down payment than the average buyer. In 2016, that percentage rose to 38%, or a jaw-dropping $3.15M! However, this is actually a significant decrease from the historical peak of 50% – or $3.68M – back in 2009. 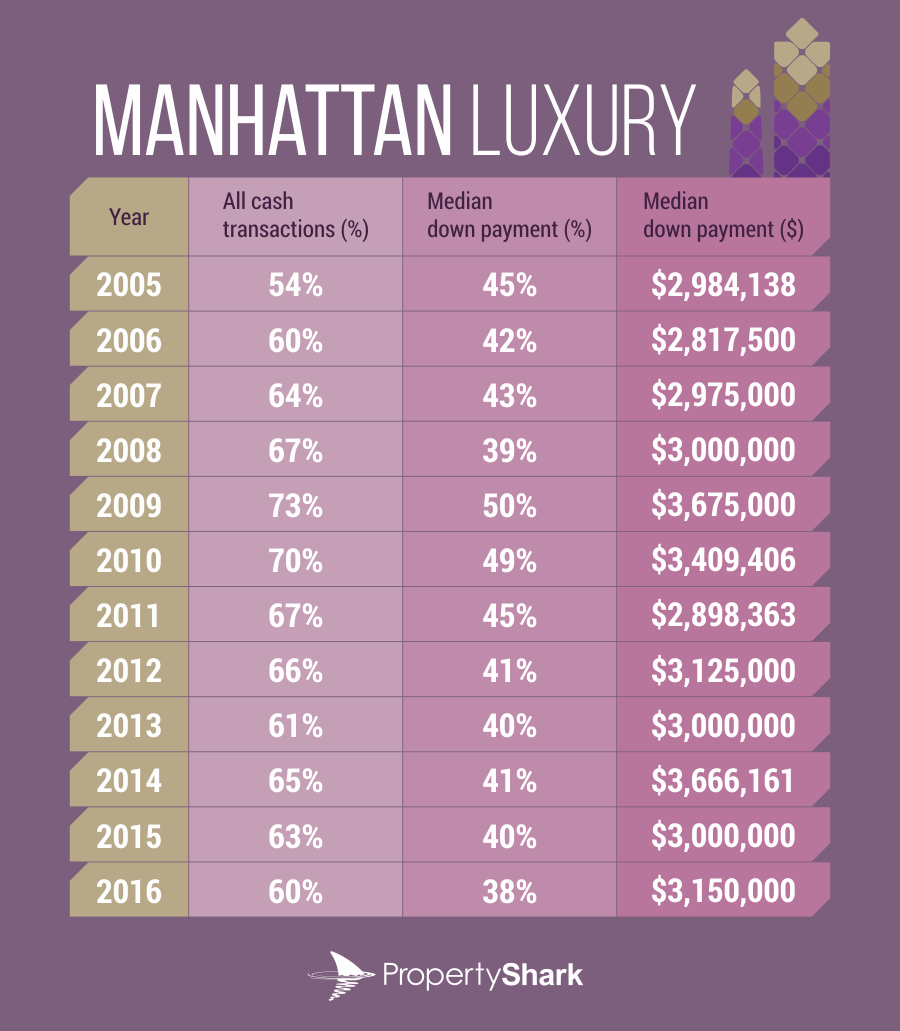 All-cash transactions less common in Brooklyn, make up only 30% of the market

Brooklyn had the highest proportion of homes bought with a bank loan of the 4 boroughs we studied – 70% – and this has been the case since 2009. The percentage varied over this time frame, but has been on the rise since 2014, when it reached 65%. As prices rise in the borough, more people looking for a home need to secure a loan to afford it. 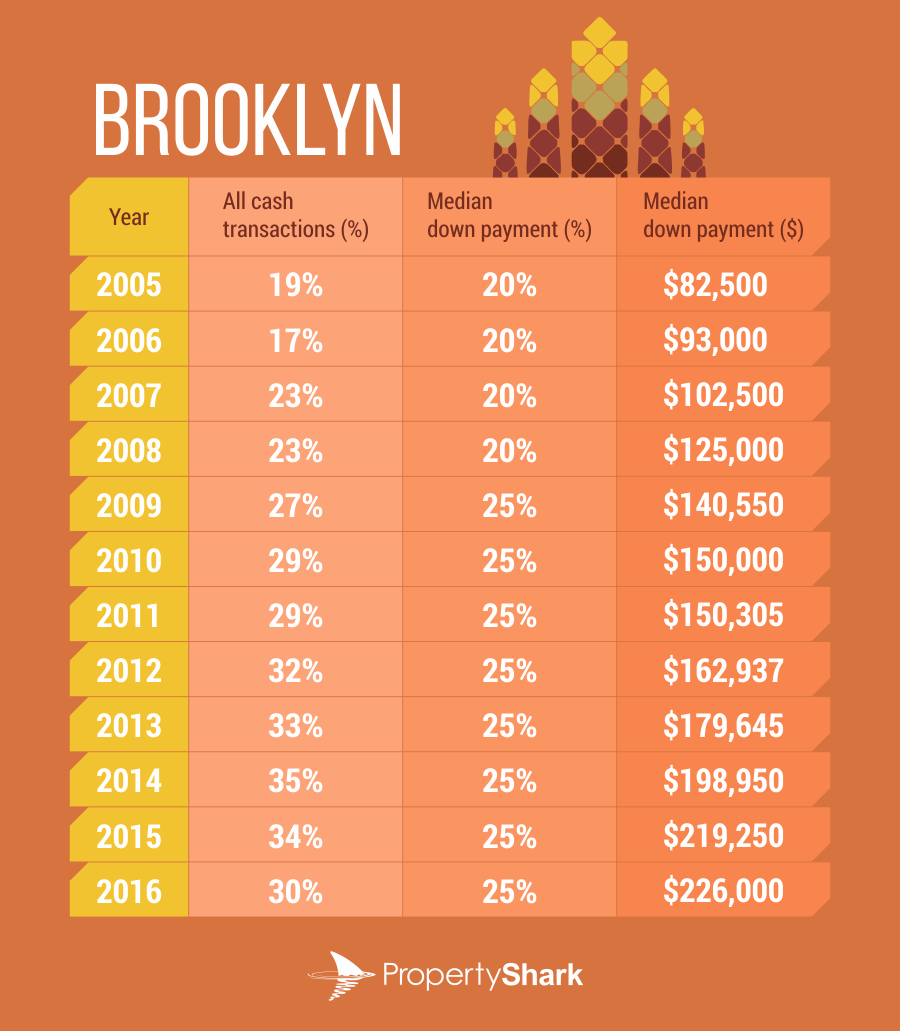 The percentage of homes bought through a mortgage in Queens was 68% in 2016, up from 64% in 2014, on a trend that mirrors that in Brooklyn. Since home prices in Queens are catching up to the ones in Brooklyn, the similarity in these two mortgage markets comes as little surprise. 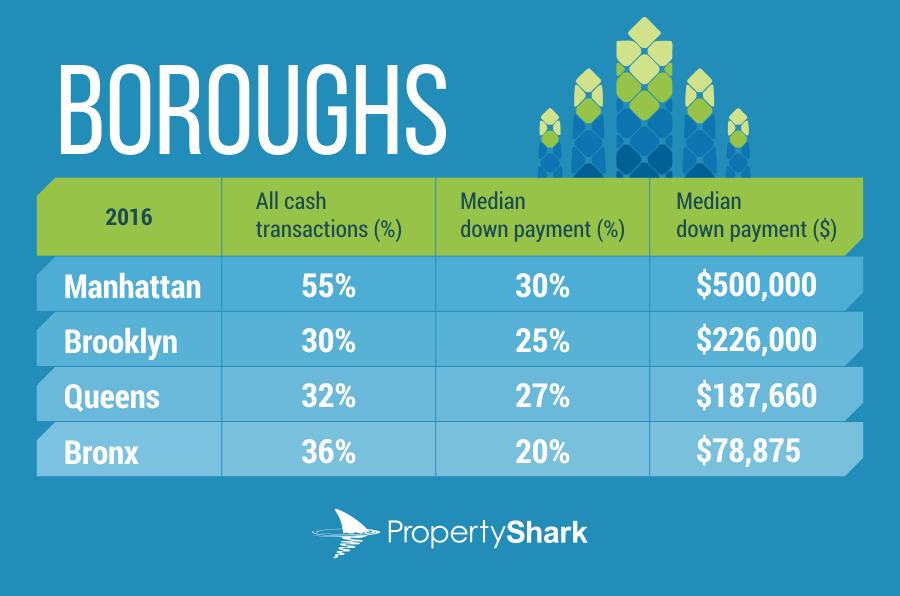 See which banks were the most popular among home buyers

Part of our research into the home-purchase mortgage market of New York also included a look at which banks issued the highest number of mortgages in 2016, and which institutions asked for the lowest, and highest, median down payment. See the full story here.

When compiling the data for this report – mortgage count and median down payment – we took into account the following residential property types: condo, single- and two-family houses. Co-ops in New York City are not considered real property, and mortgage data is not publicly disclosed, therefore they were not included in our study.

Forget What Forbes Said, Here Are the Most Expensive ZIP Codes in the U.S. in 2016

At times, searching for the true owner of a property can turn out to be… Unless you’ve been living under a rock for the past year, chances are you might…