50-20 63rd Street, Woodside, New York, is a 1,400-square-foot home in Maspeth, Queens. Purchased in April 2006 for $550,000 with two mortgages taken out the first day. The first was for $417,000 from America’s Wholesale Lender, which has since been reassigned several times and is now held by Wilmington Savings Fund Society, the plaintiff. The second loan was also originated in April 2006. That $77,750 mortgage was issued by National City Bank and is currently held by Citizens Bank. It is not currently in default.

A Comps search puts the median market value of the property at $721,000. This was determined by the recent sale price of 121 smilar properties located in the area. Built in 1945, this two-story home has a full 700-square foot basement and is just over half a mile from the 7 train.

Disclaimer: As with any auction, we recommend performing thorough due diligence and running your own comps to find out how much the property is worth. Information provided in this article is not and should not be regarded as investment advice.

At Almost $5 Million, Hudson Yards Overtakes TriBeCa as the Priciest Neighborhood in NYC

Before the economic collapse, it was only now and then that you heard about luxury… 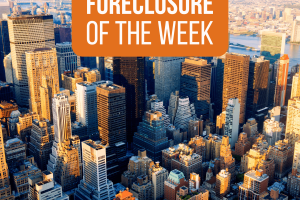 704 square-foot luxury condo in Midtown high-rise goes to auction October 31, 2018 with a…

As first reported by Forbes, the proposed luxury residential conversion at 476 Broome Street (aka…