After releasing our traditional year-end report of the 100 most expensive zip codes in the U.S., we were curious to see what the priciest desert states zip codes were in 2019. After all, Arizona made its way into top 100 for the first time ever with Paradise Valley’s 85253, while Nevada was represented by two zips for the first time: 89413 and 89402 in the Lake Tahoe enclaves of Glenbrook and Crystal Bay, respectively.

To determine the 50 most expensive desert states zip codes in 2019, we analyzed residential sales that occurred between January 1, 2019, and November 5, 2019, calculating the median sale price for each zip code. Due to two ties, our ranking actually includes 52 zips – 25 from Nevada and 27 from Arizona. For the purposes of this study, we defined the desert states as Nevada and Arizona.

Additionally, calculating medians based on sale prices rather than asking prices more accurately reflects the reality on the ground, as the final sale price can easily be higher than the initial asking figure in competitive markets that spur bidding wars. It also circumvents properties that linger on the market for extended periods of time from skewing the figures.

The Douglas County zip code returned to its usual middling position this year, dropping from 2018’s #37 – an all-time high it achieved with a $2,105,000 median last year. However, a 16% year-over-year contraction in its median put the figure below 2017 levels. 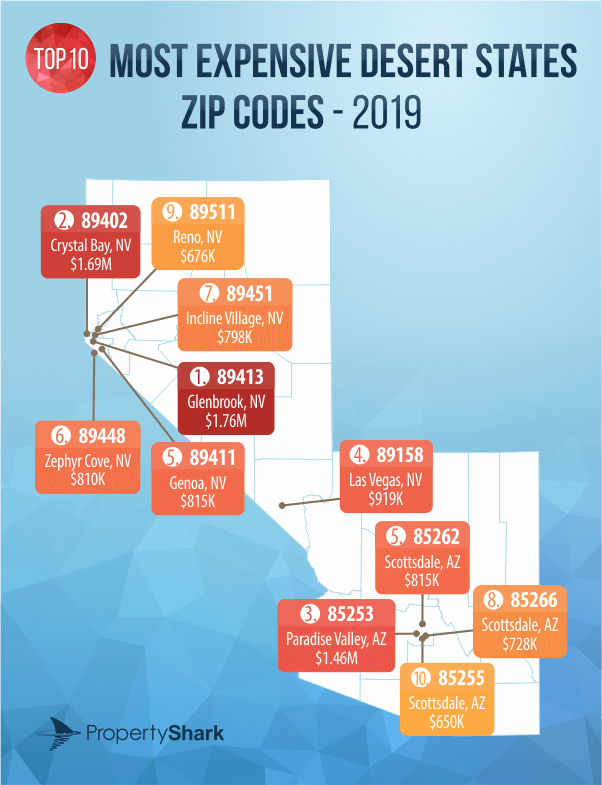 The #2 most expensive desert states zip code and the #2 most expensive Nevada zip code, Crystal Bay’s 89402 was a newcomer to PropertyShark’s top 100. The tiny Washoe County CDP landed at #64 nationally with a $1,685,000 median – despite being home to just 300 residents.

Across the state line, the #3 most expensive desert states zip code and the #1 most expensive Arizona zip code, Paradise Valley’s 85253 was also a national top 100 newcomer, sneaking in at #93. However, this affluent Maricopa County town marked the first time that an Arizona zip code ranked among PropertyShark’s top 100 most expensive zip codes. The affluent community – known for high-end real estate and celebrity residents, including rock legends like Alice Cooper and Judas Priest frontman, Rob Halford – featured a 2019 median sale price of $1,461,000.

When it came to pricey zip codes in 2019, Arizona’s ranking was, as expected, dominated by Maricopa County, which claimed 25 of the state’s 27 most expensive zips. The only two zip codes outside of Maricopa to rank among the state’s priciest were from Pima County, courtesy of Tucson.

Overall, Arizona’s top seven most expensive zip codes and their rankings remained unchanged compared to 2017. Prices, on the other hand, expanded in all seven. Specifically, Scottsdale’s 85262 – Arizona’s second-priciest zip – was up 19% compared to two years ago, while Paradise Valley’s median gained a whopping 40%.

Meanwhile, 85749 – which also covers portions of Tanque Verde and Catalina Foothills – came in as the 29th priciest desert states zip code, as well as the 12th most expensive in Arizona, with a median sale price of $410,000. Also covering parts of Catalina Foothills, 85718 claimed the 32nd spot when considering both Nevada and Arizona, and the 14th spot in Arizona with its median sale price of $395,000.

However, the champions in Arizona were the cities of Phoenix and Scottsdale, claiming 7 of the state’s priciest zip codes each and more than any Nevada location. In particular, 85262 – Scottsdale’s most expensive zip code and the 2nd priciest in Arizona – featured a median sale price of $815,000. As a result, it tied with 89411 in Genoa, NV, as the 5th most expensive desert states zip code. In fact, six out of the seven zips that Scottsdale contributed to the list ranked among Arizona’s 10 most expensive zip codes.

As for Phoenix, its most expensive zip code was 85018 with a median sale price of $531,000. This East Phoenix zip was the city’s only one to rank among Arizona’s 10 most expensive, claiming #7. Moreover, when considering zips from both Nevada and Arizona, 85018 was the 14th priciest; no other Phoenix zip code managed to surpass the $400,000 mark.

On the other hand, Nevada’s ranking presented a more balanced picture, with Washoe, Clark and Douglas counties, as well as Carson City, represented among its 25 most expensive zip codes. Namely, Washoe and Clark counties tied with nine zips each; at the city level, Reno and Las Vegas both contributed five zips each. However, when considering both Nevada and Arizona, Nevada was the leader of pricey zip codes, claiming seven of the 10 top spots.

Unlike Arizona, Nevada’s priciest zip codes ranking in 2019 presented a different picture than it did two years ago. The exception, of course, was Glenbrook’s 89413, which remained unchallenged as Nevada’s #1 most expensive zip and the priciest desert states zip. At $1,760,000, the tiny CDP’s median sale price was 12% higher than it was in 2017. 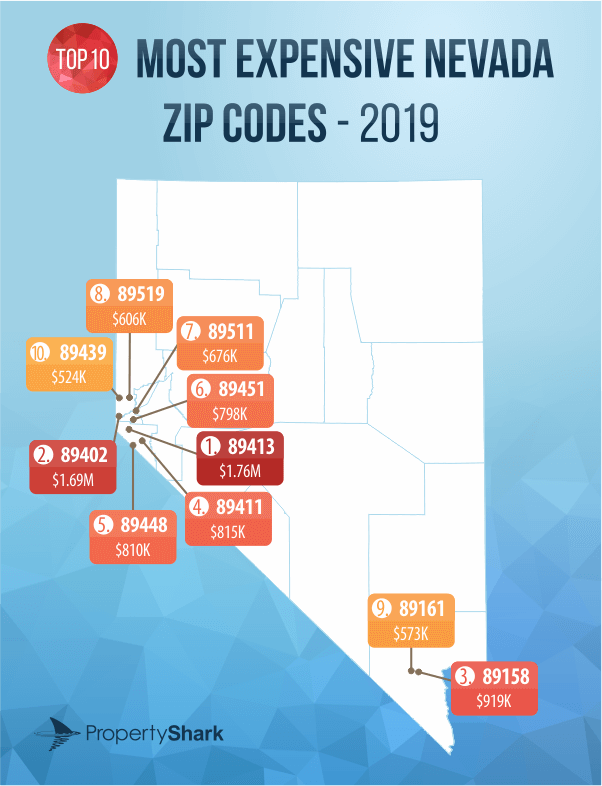 For the full list of the top 50 most expensive desert states zip codes in the U.S. in 2019, explore the table below:

To determine the most expensive zip codes in Nevada and Arizona, we looked at residential transactions closed between January 1, 2019, and November 05, 2019, taking into account condo, co-ops, and single- and two-family homes. All package deals were excluded.

For an accurate representation, we considered only zip codes that registered a minimum of three residential transactions.

Due to a number of ties, 52 zip codes made it into our top of the 50 most expensive desert state zip codes in 2019.

Median sale prices were rounded to the closest $1,000.

Key Takeaways: TriBeCa entrenched as #1 most expensive neighborhood in NYC, despite 26% Y-o-Y price…