Our annual foreclosure report tracks the number of residential properties in NYC that have been scheduled for auction. Having tracked foreclosure listings for over a decade, PropertyShark is the only service in New York that guarantees 100% coverage of the local foreclosure market and thus we take great pride in the accuracy of our reports. The stats include only first-time foreclosures to avoid over-reporting the number of distressed properties in the city as auctions are frequently postponed and rescheduled.  We report separately on lis pendens filings, legal notices which mark the beginning of the foreclosure process.

During 2017, we released quarterly reports that indicated a sharp increase in the number of properties headed for the auction block, particularly in Brooklyn and the Bronx. The fourth quarter of 2017 confirmed this trend, so the yearly stats reveal that the number of cases is at its highest since 2009, with year-over-year increases in all boroughs except Manhattan. Keep reading for detailed stats on each borough and in-depth data going back all the way to 2007 for a clear picture on the evolution of foreclosure activity in NYC.

Foreclosed homes in NYC up 58% year-over-year, reaching the highest level since 2009

After having peaked in 2008, new foreclosures in NYC dropped year after year until it bottomed out in 2012. After 2012, it followed a slow, but steady increase in new auctions until 2017, when new foreclosure auctions exploded. As a result, the number of homes scheduled for auction is now getting close to the levels seen in the aftermath of the financial crisis. With 3,306 homes scheduled for auction, 2017 brought a 58% increase year-over-year and the third highest number of cases per year in the last decade. The number of cases has actually almost doubled in just 2 years as 2015 posted 1,762 new foreclosure auctions. 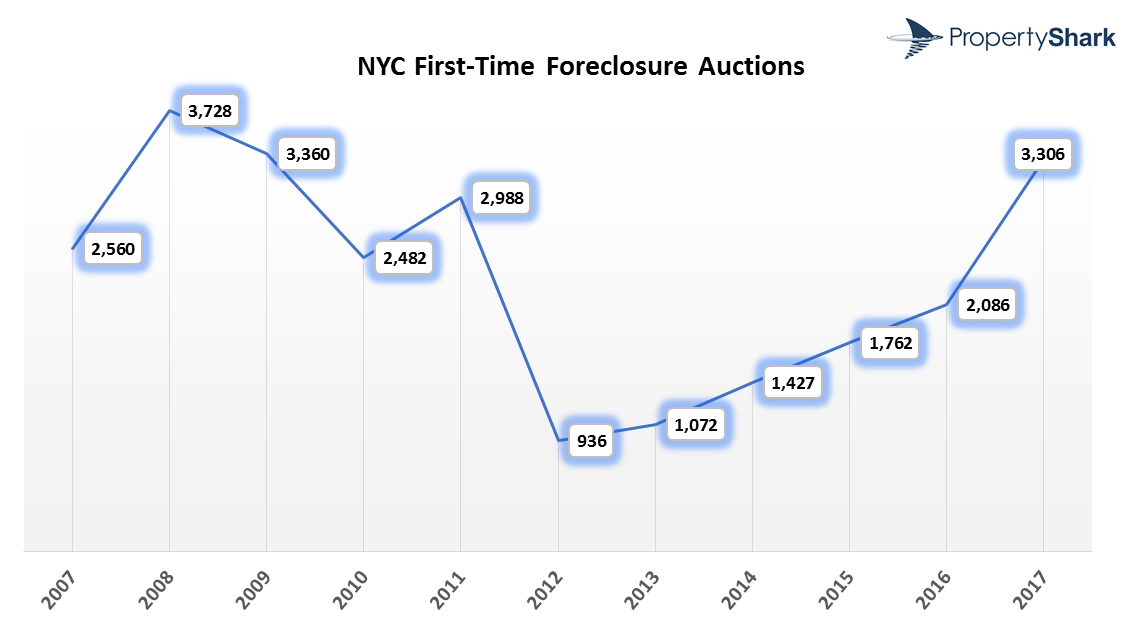 827 homes were scheduled to be auctioned in Brooklyn during 2017, double the number recorded in 2016 and the highest in the past decade. The previous record dates from 2008 when foreclosure cases peaked across the city and Brooklyn had 460 homes scheduled. The highest concentration of foreclosed homes is located in the eastern part of the borough, with zip code 11236 in Canarsie logging 113 new cases. Neighboring zip codes 11208 (East New York) and 11234 (Canarsie) follow with 94 and 86 cases, respectively.

Staten Island sees the most dramatic increase of all the boroughs, up 134% year-over-year

In Staten Island, 428 first-time foreclosure auctions were scheduled in 2017, compared to 183 in 2016. This is not the highest number of cases recorded during a year in the borough as 2008 brought 616 cases. Still, the increase is sharp compared to previous years and foreclosure activity went up all across the borough. 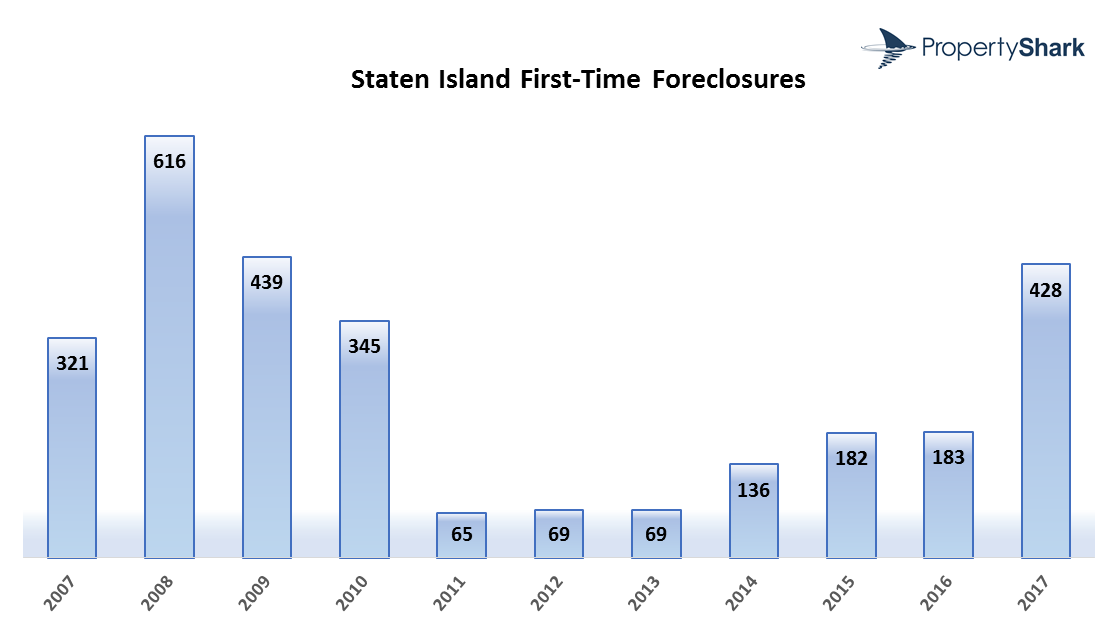 Foreclosures in Queens up 40% year-over-year, the Bronx sees similar increase of 44%

Queens continues to have the highest number of homes in foreclosure of all NYC boroughs, but the Y-o-Y increase was rather moderate when compared to Brooklyn. 1,260 homes were scheduled in 2017 compared to 898 in 2016 – translating into a 40% increase year-over-year. The peak year in Queens was 2008 when 2,284 homes went to the auction block. Zip code 11434 in Southeastern Queens was once again the setting for the highest number of auctions – 114 homes scheduled in 2017. 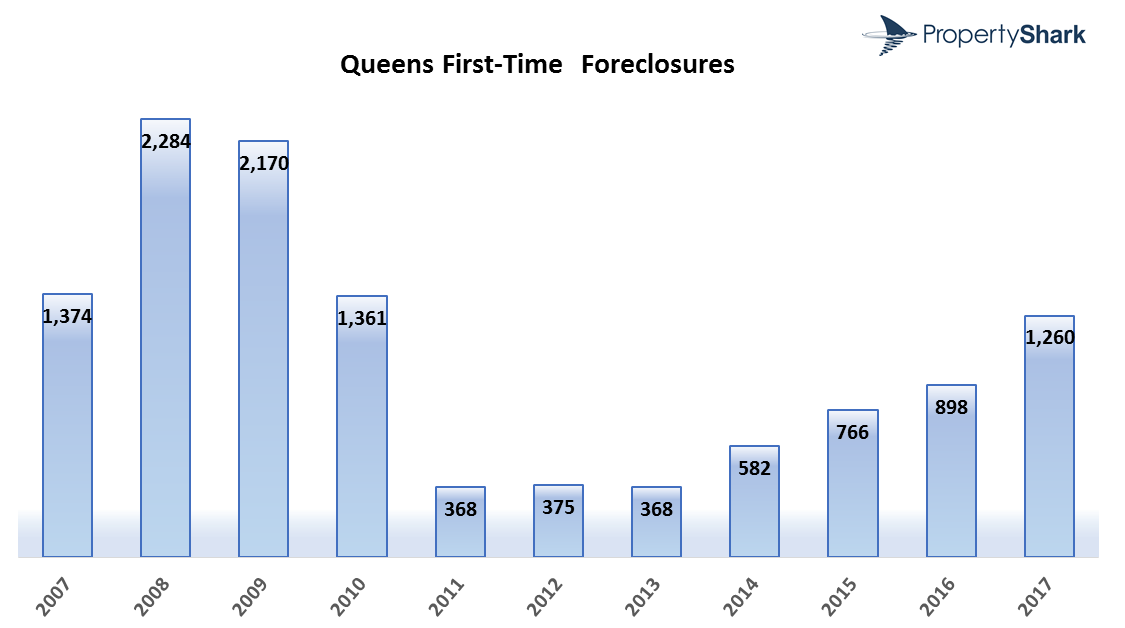 In the Bronx, new foreclosures increased 44% year-over-year as 650 homes were scheduled for auction in 2017, the highest number in the past decade. The highest number of cases was recorded in zip code 10469, covering parts of Williamsbridge, Baychester, and Pelham Gardens.

Manhattan continues to see very little fluctuation in homes scheduled for auction so foreclosures are still a rare sight in the borough, even if 2017 brought big-ticket auctions at the ultra-luxury condo development, One57.

The number of homes entering the foreclosure process by receiving a lis pendens notice in 2017 stayed on the same descending trend we’ve noticed over the past years. 12,072 filings were recorded in 2017, translating into a 4% year-over-year decrease. Over the last decade, only 2011 had fewer pre-foreclosure cases filed at 10,911 across the entire city. Of all homes that reached the foreclosure auction stage in 2017, the majority had their lis pendens filed in 2013-2014 when there was an increased number of cases filed in the city. Further, around 20% of the homes scheduled for auction in 2017 received their initial lis pendens notice in 2009 and 2010 at the peak of the housing crisis. 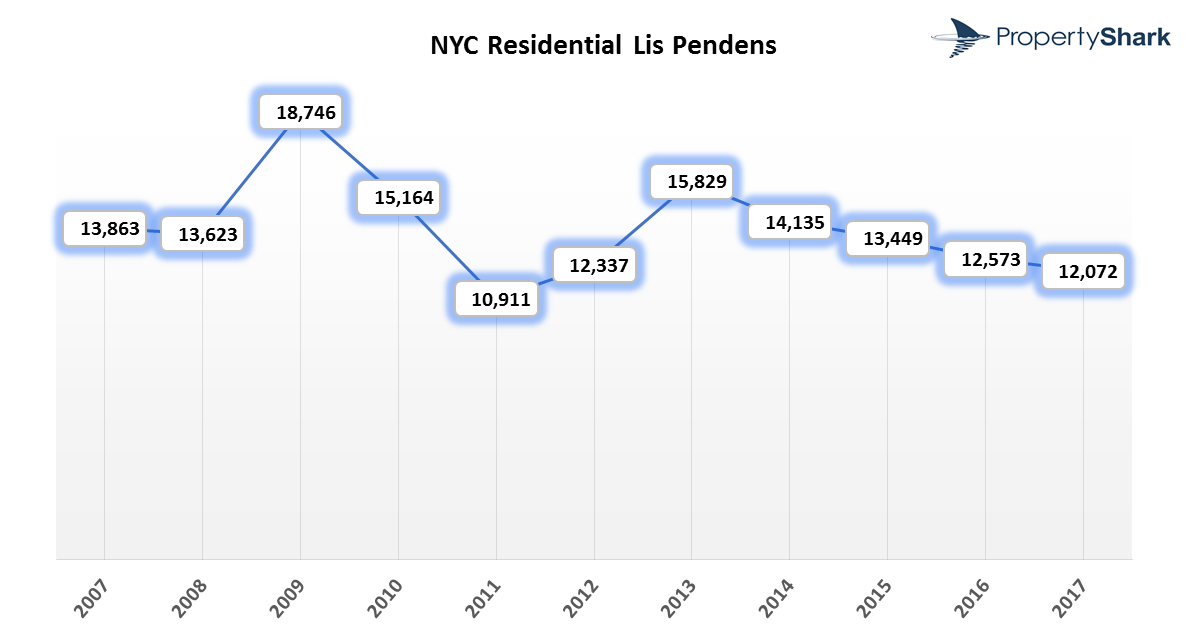 Our report focuses on residential properties that are scheduled for auction for the first time in 2017. Auction postponements are fairly common and by removing them from our analysis we avoided over-reporting the number of properties affected by foreclosure. Residential properties included are single- and two-family homes, and condo and co-op units.

Pre-foreclosure data refers to unique properties that received at least one lis pendens filing in 2017. This may be a first-time filing or a re-filing. The same building class restrictions apply (excluding co-ops). If more than 3 units were referenced on the same lis pendens filing they were not counted at all in order to avoid counting entire buildings under lis pendens.

Condo in Murray Hill high-rise goes to auction on October 16, with a lien of…