Here are the key findings from our NYC Foreclosure Report for Q1 2018: 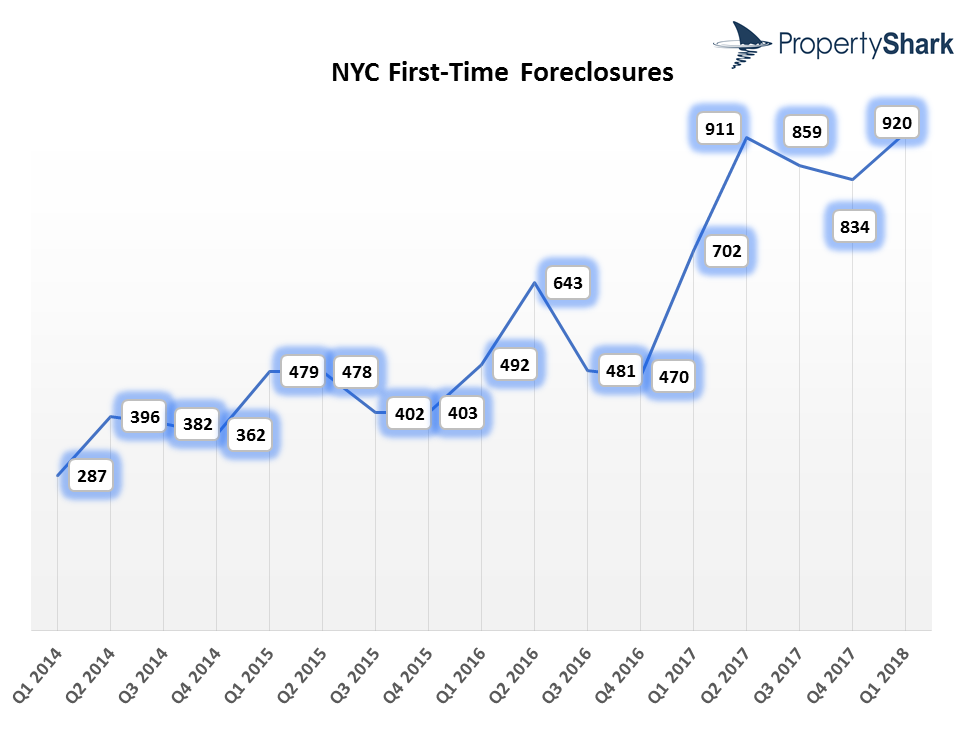 920 new foreclosures were recorded in Q1 2018, compared to 702 in Q1 2017. While we’re seeing the highest number of foreclosed homes in any quarter since 2009, lis pendens cases were down 13% year-over-year, meaning that fewer homeowners are entering the foreclosure process. Brooklyn and the Bronx led by increases in new foreclosures, while cases went down 13% in Queens. Here is a breakdown by borough and a comparison with Q1 2017: 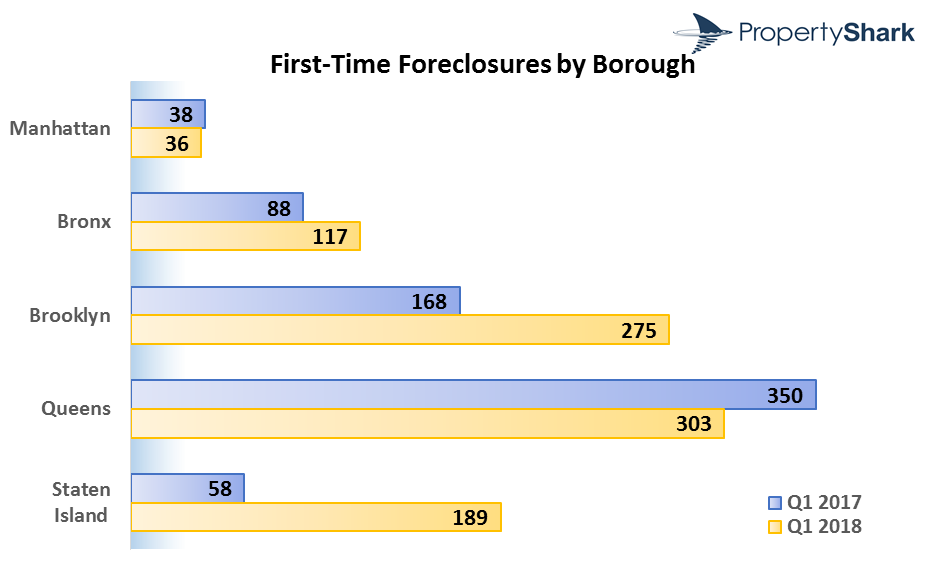 In Brooklyn, 275 homes were scheduled for auction for the first time during Q1 2018, the highest number ever recorded in the borough and close to the level recorded in Queens during the same period. By comparison, in Q1 2017, 168 Brooklyn homes were scheduled for auction. The increase is even more dramatic if we were to compare this past quarter with the numbers recorded two years ago–only 79 properties were foreclosed during Q1 2016. This trend might be partly due to recent changes made by the Kings County Supreme Court to consolidate cases under fewer judges in order to decrease the borough’s backlog of distressed properties.

The highest number of new foreclosures in Brooklyn comes from its eastern part, and zip code 11236 covering Canarsie and Flatlands had the most cases of any NYC zip code – 45 homes were scheduled for auction here. 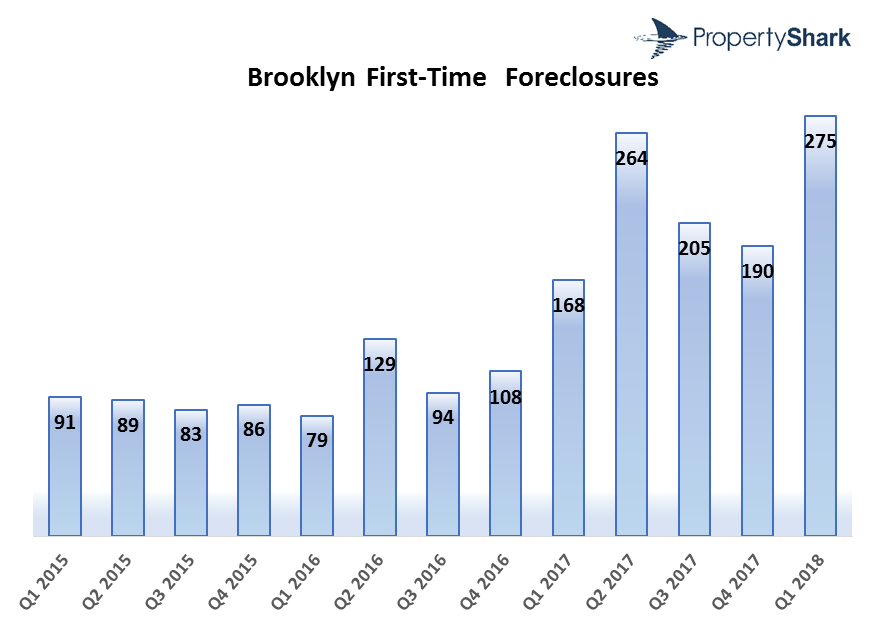 The first quarter of 2018 brought a 33% hike in new cases as 117 homes in the Bronx headed for the auction block. This represents a 41% drop compared to Q4 2017, when 197 homes in the borough had an auction scheduled. Zip code 10462, covering parts of Van Nest, Parkchester, Bronxdale, and Morris Park had 25 auctions, the highest in any zip code in the Bronx. 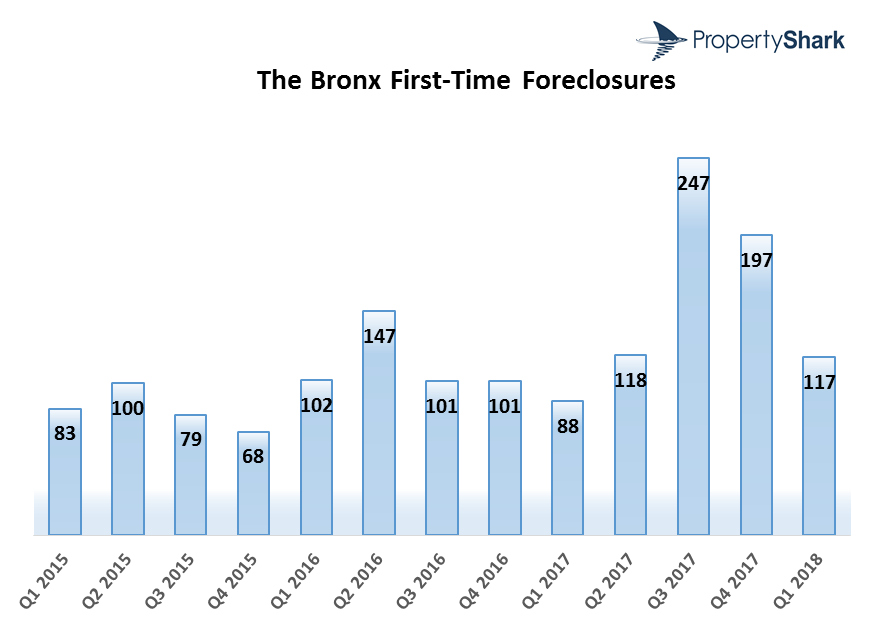 189 homes on Staten Island were scheduled for auction in Q1 2018, marking a sharp 226% year-over-year increase. The borough had low foreclosure activity over the past years, but this trend changed in 2017 when the number of cases started going up, with a spike in Q4 2017 when 185 new foreclosures were recorded. 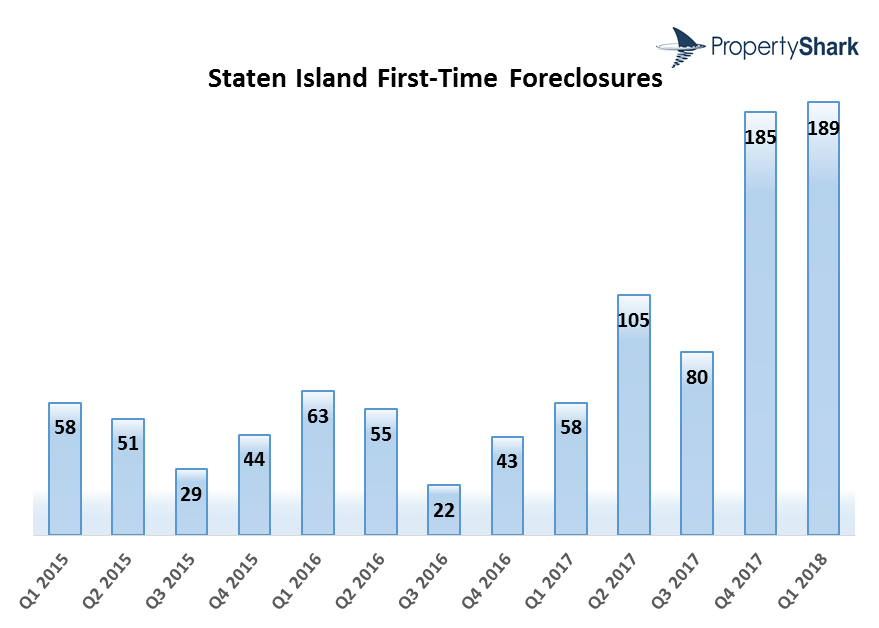 Bucking the city-wide trend, foreclosures in Queens went down compared to the same quarter last year, registering a 13% year-over-year decrease in Q1 2018. The borough’s highest foreclosure activity was still recorded in Jamaica’s 11434 zip code where 32 homes were scheduled for auction during the first quarter of 2018. 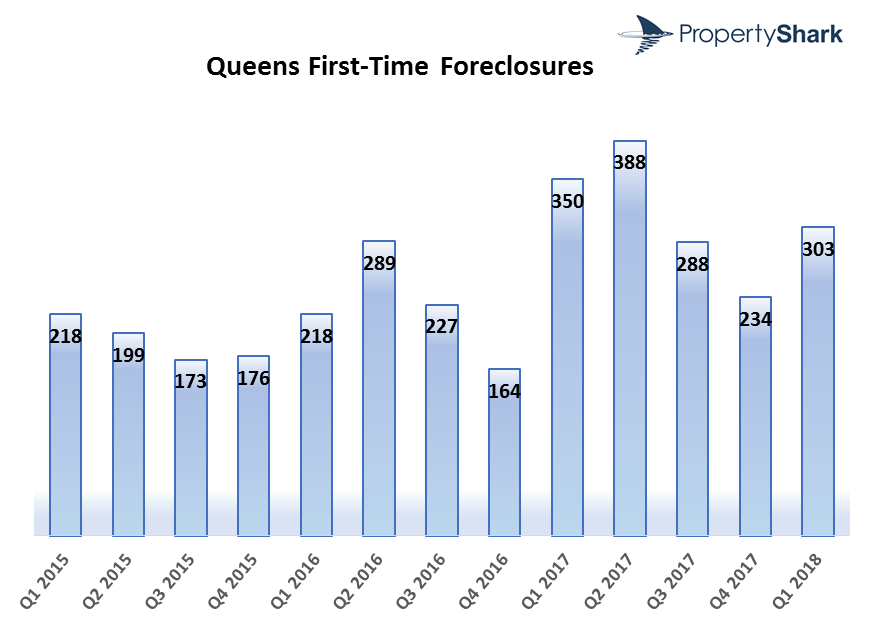 The other borough to close Q1 with a decrease in first-time foreclosures is Manhattan, where foreclosure activity did not go through any major fluctuations over the years. In Q1 2018, 36 new foreclosure auctions were scheduled, translating into a 5% year-over-year decrease.

While the number of homes scheduled for auction in NYC is going up, new lis pendens filings decreased 13% year-over-year city-wide. In Q1, 2,694 homes entered pre-foreclosure compared to 3,082 during the same quarter last year. The Bronx was the only borough to register an uptick in new cases, of 2%, while all other boroughs saw decreases. 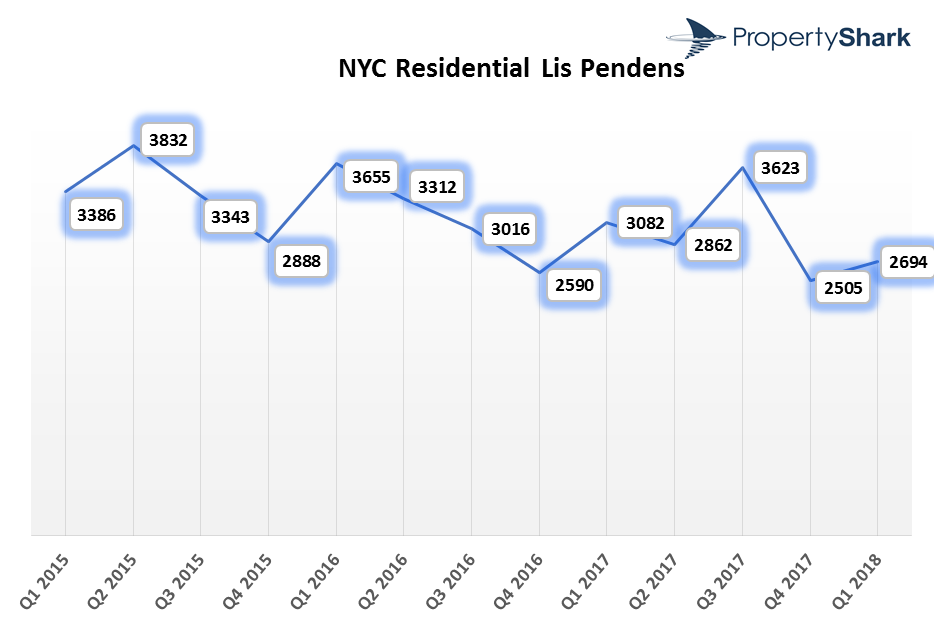 Having tracked foreclosure listings for over a decade, PropertyShark is the only service in New York that guarantees 100% coverage of the local foreclosure market. The stats include only first-time foreclosures to avoid over-reporting the number of distressed properties in the city as auctions are frequently postponed and rescheduled.  We report separately on lis pendens filings – legal notices which mark the beginning of the foreclosure process.
Our report focuses on residential properties (single- and two-family homes, condo, and co-op units) that were scheduled for auction for the first time in Q1 2018. Auction postponements are fairly common so by removing them from our analysis we avoid over-reporting the number of properties affected by foreclosure.
Pre-foreclosure data refers to unique properties that received at least one lis pendens filing in Q1 2018. This may be a first-time filing or a re-filing. The same building class restrictions apply (excluding co-ops). If more than 3 units were referenced on the same lis pendens filing they were not counted at all in order to avoid counting entire buildings. Timeshare foreclosures usually go by almost unnoticed, as their complicated ownership structure can make them… 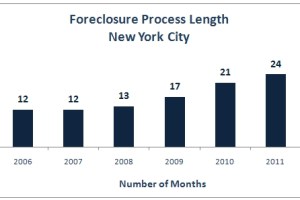