The second quarter of 2017 brought with it a big increase in the number of new residential foreclosures as 911 NYC homes were scheduled for auction. That is 42% more compared to Q2 2016 which at the time was the quarter with highest number of foreclosures since 2010.

We’d have to look all the way back to Q2 2009 to find the same level of foreclosure activity in NYC, so check out the quarterly evolution in this chart: 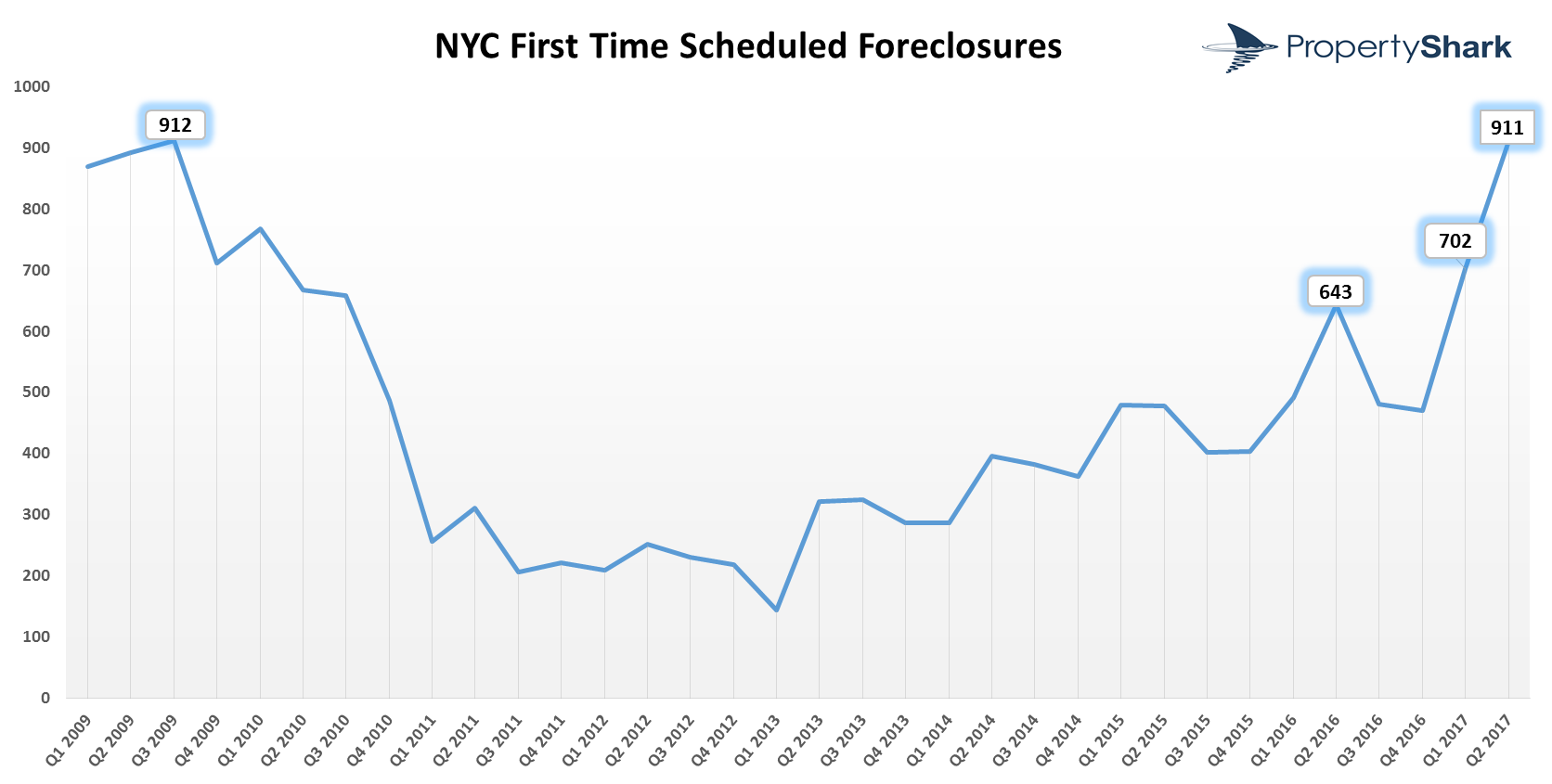 Of all NYC boroughs, Brooklyn saw the most dramatic increase in the number of homes heading for the auction block as 264 homes were scheduled in Q2 2017.

Q2 2016 already showed signs of a rise in number of cases after several quarters with little fluctuation, followed by another spate of cases in Q1 2017. The second quarter of 2017 brought even higher numbers, up 105% Y-o-Y and 57% Q-o-Q. In fact, based only on the first two quarters of 2017, Brooklyn has already exceeded the total number of homes foreclosed in all of 2016. 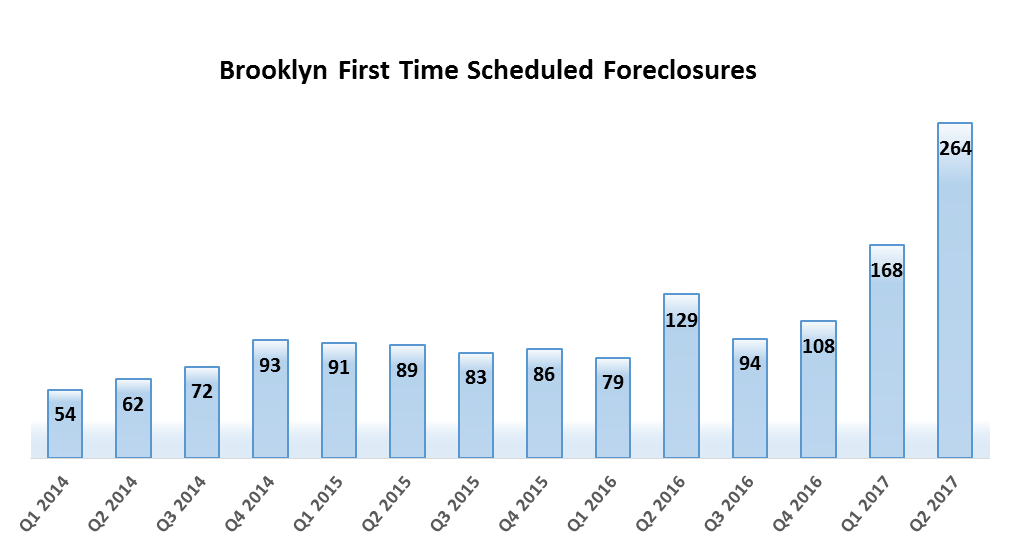 After several quarters with rather low foreclosure activity, Staten Island experienced a spike in homes scheduled for auction during Q2 2017. A total of 105 residential properties were foreclosed, compared to 55 in the same quarter of 2016 and 58 in the first quarter of 2017. 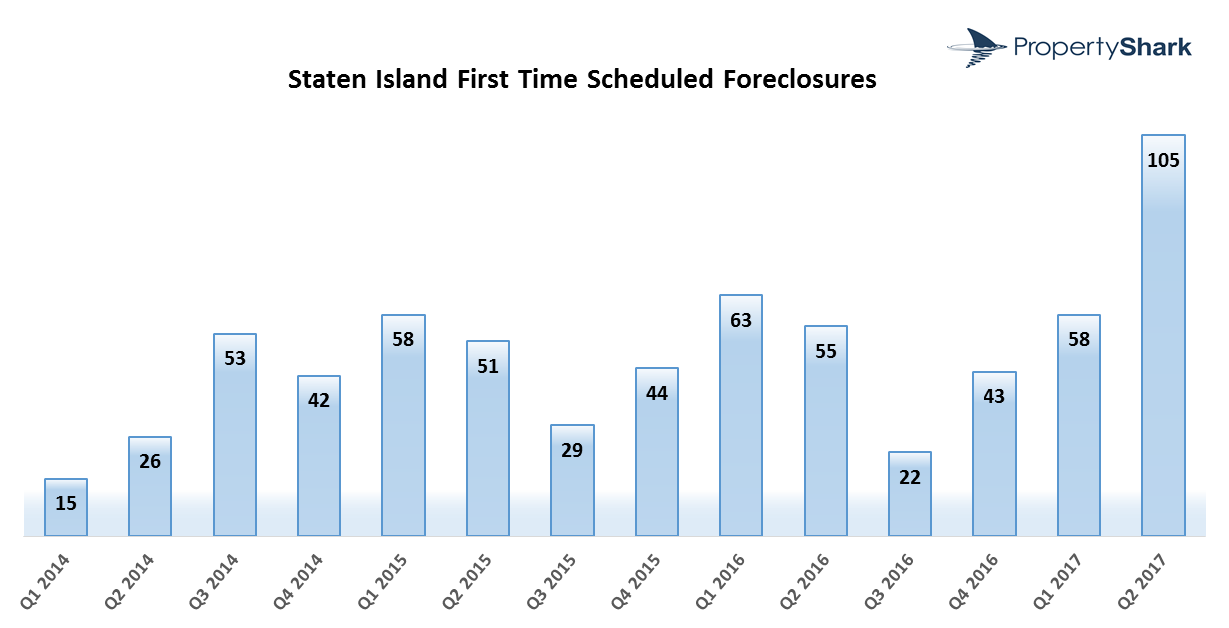 Foreclosures in Queens went up 34% Y-o-Y

388 homes were scheduled for auction in Queens during the second quarter of 2017 and this represents the highest number of foreclosures in the borough since Q3 2010. After a spike in numbers in Q2 2016, the borough went through a slowdown in the last two quarters of 2016; however, the first two quarters of 2017 brought an increasing number of cases. 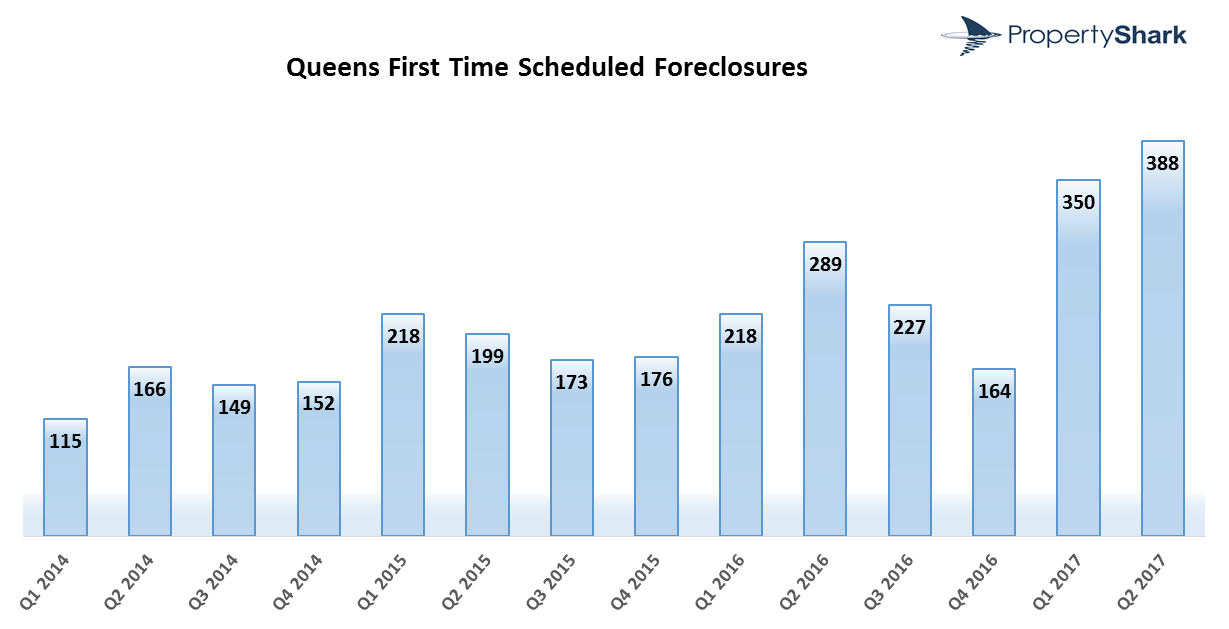 While the total number of NYC foreclosures went up 42% Y-o-Y and all boroughs recorded quite high increases, the Bronx is the only place where foreclosed homes decreased Y-o-Y. 118 foreclosures were scheduled in the borough in Q2 2017, compared to 147 in Q2 2016 and that translated into a 20% drop in homes scheduled for auction. 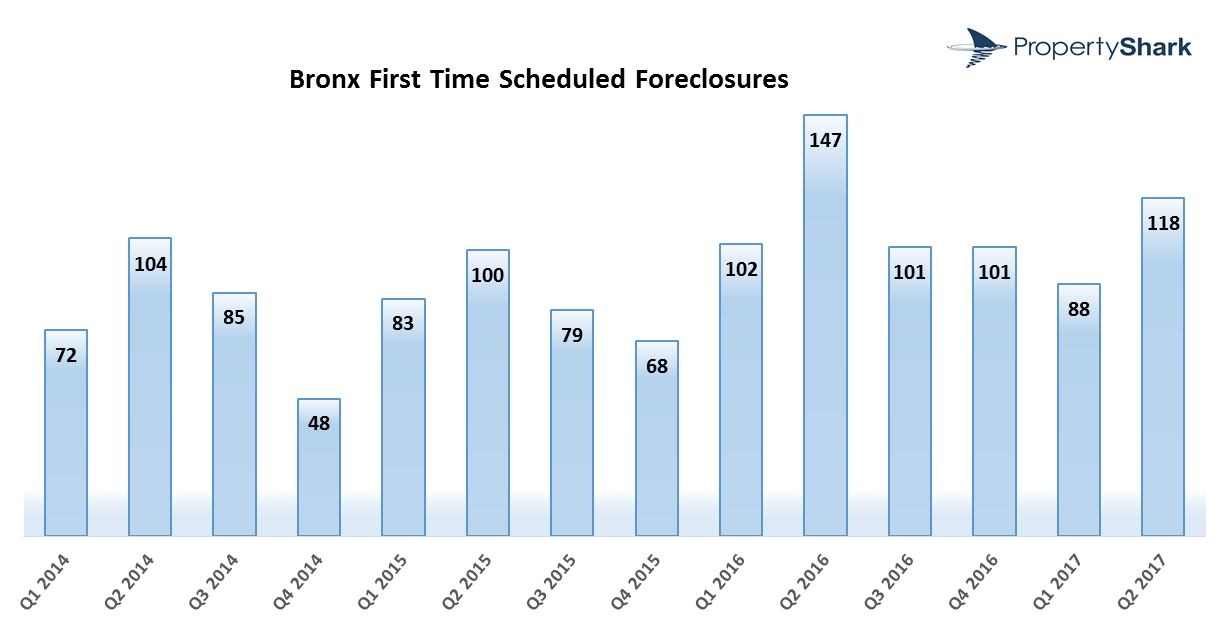 Manhattan foreclosures still a rare sight, though up 57% Y-o-Y

Recently, our foreclosure listings revealed big ticket auctions at one of Manhattan’s most iconic new developments, One 57, where 2 units were scheduled in less than 1 month. Still, the number of new foreclosures in Manhattan keeps to a low level with 36 cases recorded in Q2 2017, up 57% Y-o-Y and down 5% Q-o-Q.

In Q2 2017, the number of pre-foreclosure cases filed over all of NYC was under the 3,000 mark, registering a 7% Y-o-Y decrease. By borough, Queens saw the biggest decrease in cases, down 12% Y-o-Y, while Manhattan had the biggest increase, up 9% Y-o-Y. 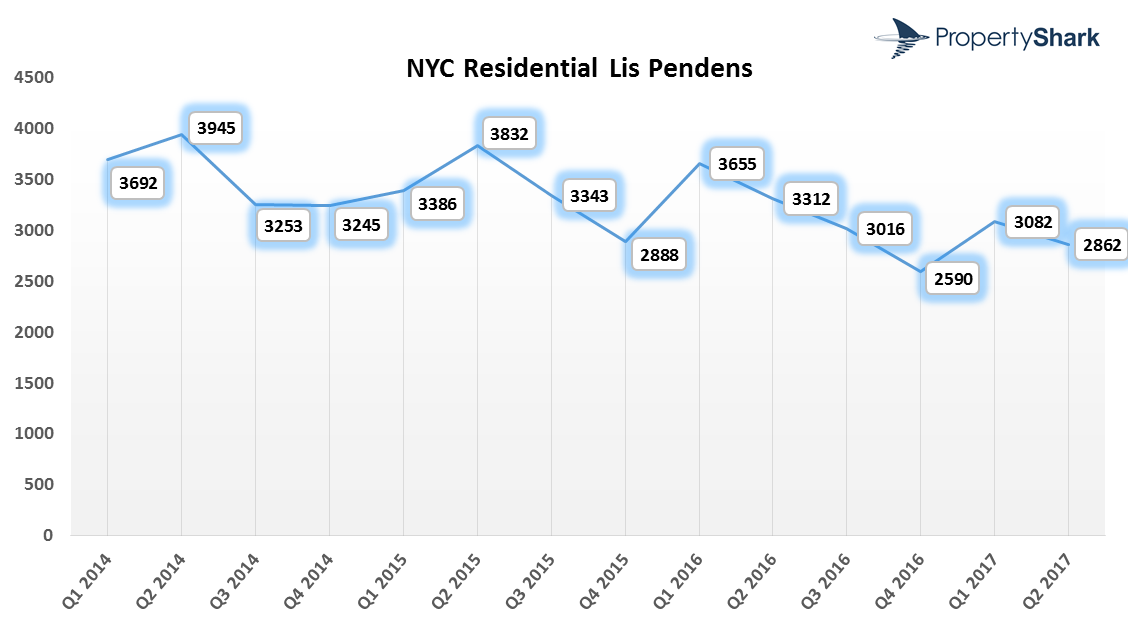 Our report focuses on residential properties that are scheduled for auction for the first time. Auction postponements are fairly common and by removing them from our analysis we avoid over-reporting the number of properties affected by foreclosure. Residential properties included are single-family and two-family homes, and condo and co-op units.

Pre-foreclosure data refers to unique properties that received at least one Lis Pendens filing in Q2 2017. This may be a first-time filing or a re-filing. The same building class restrictions apply (excluding co-ops). If more than 3 units were referenced on the same Lis Pendens filing they were not counted at all in order to avoid counting entire buildings under Lis Pendens.

1,120-square-foot single-family home with full basement goes to auction December 14, 2018 with a lien…

Key takeaways: With only 716 unique cases, NYC foreclosures decreased 17% Y-o-Y; Queens had the…

Key takeaways Queens, with an 8% increase Y-o-Y, was the only borough to see an…