In its most recent quarterly report, Corcoran states that Q3 2017 marked the second consecutive quarter of annual growth for the Manhattan residential market. Meanwhile, the Brooklyn market continued to keep up the pace set at the beginning of the year, despite the limited resale inventory now facing the borough.

After ranking second in Q2, the Flatiron District stole the show in Q3 and became the priciest neighborhood in New York City. The median sale price reached $4,399,375, a 220% increase compared to the same time last year. This massive growth is largely attributed to the 39 condos that sold at 41-43 East 22nd Street, where prices ranged from $2.6 million to $9.4 million.

TriBeCa takes a step back in Q3, and lands in the second spot with a 9% drop, to a median sale price of $4,090,000. Sales activity in the landmark neighborhood slowed down considerably in Q3, with only 70 transactions closed, while in Q3 2016 TriBeCa saw a total of 153 transactions close, amounting to a year-over-year decrease of over 50%.

Central Park South takes the third spot with a median sale price of $3,395,000–an annual growth of 103%. The rise in the median sale price in Central South Park can be attributed to the four transactions that took place at the high-end ONE57 building at 157 West 57 Street, where units fetched prices between $3.6 and $6.6 million. 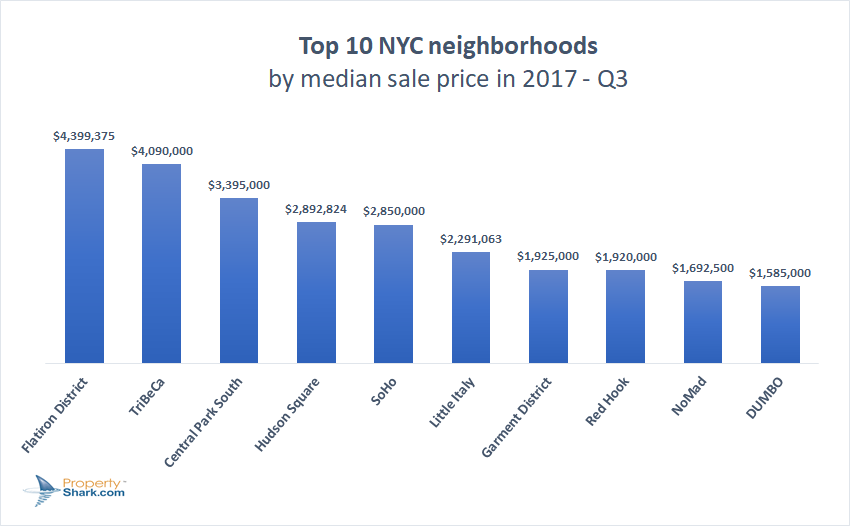 Brooklyn’s Red Hook, a new entry on our list, ranked 8th with a median sale price of $1,920,000, thus snatching the title of the priciest Brooklyn neighborhood in Q3. One of the main reasons Red Hook made it onto our list this quarter is the new townhouse development on King Street. First announced by YIMBY in 2015, the project came online in the early months of 2016. The massive project is quite uncommon for the Brooklyn scene, and for Red Hook as well, but it proved to be a real success, bringing in significant growth to the borough’s residential market.

Ranking 27th in our top 50, Belle Harbor is the priciest neighborhood in Queens. Belle Harbor prices increased 27% over last year, reaching a median sale price of $1,072,500. Other neighborhoods, like Ditmars-Steinway, East Flushing and Douglaston, also saw prices increase by double-digits. The most impressive growth can be observed in Douglaston, where prices rose 45% year-over-year.

You can see the full ranking in the table below:

At times, searching for the true owner of a property can turn out to be… Our sister company, Point2Homes, has compiled a nifty collection of satellite images that reveal just…