The NYC retail market has seen not only rents climbing in 2015, but also some strong deals being closed, most of them in Manhattan but several of them in Queens and the Bronx as well.

Located in Chelsea, this store building was previously sold in 2014 for $252,000,000 and it is currently rented out to an Old Navy store. Though spanning only 70,000 square feet, it can be expanded to almost 300,000 based on the property’s zoning. Vornado Realty is the new owner and has expanded its already massive retail portfolio with this acquisition.

This commercial property, commonly referred to as the Ford Building was purchased by a partnership between an investment fund controlled by Bill Ackman and Georgetown Company, as reported by the Commercial Observer.

Eretz Group is the new owner of this landmark property, known as the Argonaut Building, including both office and retail spaces.

Here are the top 20 priciest retail deals closed in NYC in 2015: 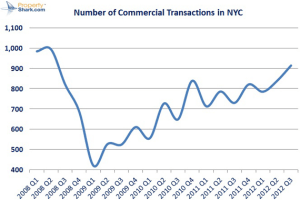 In Q3 2012 the segment with the most encouraging activity continued to be the office spaces, bringing $3.66 billion in sales, up 22% quarter-over-quarter.