Harlem is clearly undergoing some quite dramatic changes and the neighborhood made the news recently with gentrification-related topics. Back in July, an attempt to re-name part of Harlem up to 125th street as SoHa has been opposed by the local community and brokers had to step back and give up the name. The new Whole Foods opening in Harlem was also seen as a sign of gentrification, while the East Harlem rezoning is now being met with opposition due to fears that it will fail to preserve and create enough affordable housing in the area.

As much as 80% of housing units are rentals in Harlem, but the area is becoming increasingly attractive for buyers looking for spacious brownstones. So we took a look at how prices have evolved since 2009 in the Harlem single-family townhouse market compared to the rest of Manhattan. When it comes to real estate prices, Harlem is still a cheaper option compared to the rest of Manhattan, but it’s been growing so rapidly that one may wonder how much longer it will stay cheaper. So, how much longer until Harlem is just another part of prohibitively pricey Manhattan?

Read on for stats on price evolution since 2009 and a price increase projection for the coming years. Plus, we have unique insights from local broker Todd Stevens, who began his career at Douglas Elliman back in 2002 and has been working in Harlem ever since. Having won multiple awards as a top-selling agent, Todd has sold more than 80 townhouses and has in-depth knowledge of Harlem market trends, as well as life in the neighborhood.

Harlem has seen its average price per square foot skyrocket 171% compared to 2009 levels, by far the most drastic increase of all the Manhattan sub-markets. If in 2009 one could become the owner of a Harlem townhouse by paying $237 per square foot, in 2017 homes in the neighborhood traded for $642 per square foot. The peak in prices was reached in 2016 when homes in Harlem sold for $855 per square foot.

For Manhattan overall, the average price recorded in 2017 is $1,838 and during the period analyzed, the market reached its highest point in 2015 when homes traded for $$2,051 per square foot-that’s more than 3 times higher than prices in Harlem for the same year.

Harlem prices could catch up with Manhattan by 2028

Given the accelerated growth of Harlem’s townhouse market compared to a slower rate for Manhattan as a whole, where established areas no longer see spikes in prices, Harlem has the potential to become just another part of Manhattan when it comes to prices. At an average yearly growth rate of 15% compared to 5% for  Manhattan, Harlem could close the price gap by 2028 if the current pace keeps up. While this is just a projection and many factors could intervene, at the current growth rate, the price per square foot in Harlem could reach $3,102 in 2028, compared to $3,132 for Manhattan overall.

Furthermore, by 2026, Harlem could reach the same levels as the Upper West Side when it comes to prices, as both markets are predicted to hover around an average of $2,330 per square foot. Here’s what Harlem broker Todd Stevens has to say about the evolution of the local market: “The original integrity of Harlem townhouses surpasses the value of other houses in other neighborhoods of Manhattan.  I believe the average value of Harlem townhouses has the potential to surpass the average value of townhouses in the Upper West Side.” 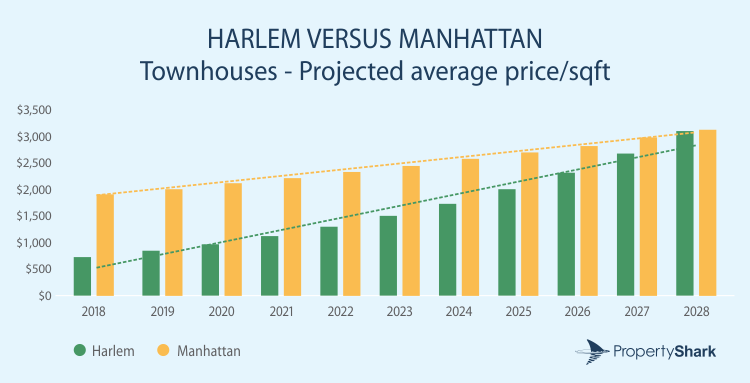 In comparison, by 2026, Downtown Manhattan could reach an average price per square foot of $7,462, if the current yearly growth keeps up. Harlem would still be at far distance behind it, however, Todd Stevens notices the similarity between the accelerated price growth in the two areas. He predicts that Harlem could catch up with the borough’s average in 20 years. When looking at Harlem versus the rest of Manhattan instead of overall, it would take until 2032 for Harlem to reach the same average price per square foot.

“Harlem is a unique neighborhood and its advancement has the potential to grow the same way TriBeCa grew, while I believe this could be twenty years from now in comparison to eleven years from now as this study shows.  I’m confident that in ten years, the majority of Harlem townhouses will be one and two family townhouses with the homeowner living inside the house.  The average value of a Harlem townhouse has definitely doubled since our lowest value year of 2009.  I do not know of any townhouses of the same condition that have tripled in value from 2009 to 2017.”

It remains to be seen how prices will evolve in Harlem and if this accelerated growth will last , but so far it’s definitely clear that prices have exploded over the past years and that buyers’ appetite for spacious Harlem homes is high and expected to keep growing.

The analysis includes sales of single- and two-family homes in Harlem from 2009 to July 14, 2017. Package deals were excluded when calculating price per square foot.

Supply Struggle for the US Housing Market in Q2 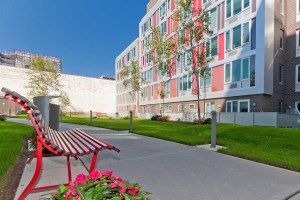 Last year was great for markets all around the world. Although the trade war and…