Considering that it’s been a decade since the start of the Great Recession, we decided to check out how Silicon Valley—now one of the most dynamic real estate markets in the US—fares today. Often seen as a victim of its strong economy and failure to add much-needed inventory, the housing market in California is going through a supply crisis, as home builders struggle to keep up with the surging demand. But maybe nowhere else is this housing crisis as visible as in Silicon Valley.

Read on to find out more about the striking levels home prices have reached in the area, as well as how they compare to prices recorded back in 2007.

We’ve also noticed sizable increases in both Mountain View and Menlo Park.  Back in 2007, Mountain View was one of the towns where the median sale price was below the $1 million mark, clocking in at $764,750. Perhaps best known today as the home of Google’s headquarters, the town has seen home prices skyrocket to $1,570,000 so far this year.

Facebook’s home base, Menlo Park, has also experienced a dramatic increase in prices over the past decade. In 2007, the median sale price here was just a little above the $1 million mark. Accelerated growth started after 2011, the year Facebook opened its headquarters here. Compared to a decade ago, prices have almost doubled, amounting to a $1 million price difference – the median sale price in Menlo Park so far in 2017 being $2,050,000.

The median household income increased as well in all towns except for Morgan Hill, which as of 2015 was $96,051 – a decrease of $3,192 compared to 2007. Still, the advance made when it comes to income are less spectacular than median sale price growth, most towns seeing only increases of 10 to 20% in household income.

Overall, for all the Silicon Valley towns we analyzed, the median sale price of homes sold in 2017 hit $1,050,000 adding $320,000 compared to the median recorded in 2007. Some towns far outpaced the growth trend for the region and there were seven towns where the median grew by more than $1 million over the past decade. Besides Palo Alto, the other markets are – Atherton, Los Altos Hills, Los Altos, Hillsborough, Portola Valley, and Woodside.

Atherton consistently ranks among the most expensive places for home buyers in the US, as the exclusive enclave is home to some of the richest people in the tech sector. High demand and low supply have sent prices here through the roof, reaching $5.1 million in 2017 so far, representing a $1,580,000 growth compared to 2007. The local housing market hit its pre-recession peak in 2008, when homes sold for a median sale price of $3.9 million. They then took a tumble in 2009 and 2010, only to rebound and grow even faster over the following years.

Boasting the highest median price in the Valley, Atherton is also home to the richest inhabitants—the median household income here was over $250,000 according to the 2015 ACS Survey. The only other town with the same income level is Woodside, the third most expensive in Silicon Valley by median sale price.

Though Atherton is still the undisputed leader in Silicon Valley, Los Altos Hills has recorded the highest dollar increase compared to 2007. The median home sale price here added $1,725,000 compared to 10 years ago.

Fueled by the booming tech sector and struggling with low supply, prices here are expected to continue to grow, though some progress is being made when it comes to building more housing. Add to that  Google’s plans to turn downtown San Jose into a transit-centered Google village, and the local market will probably heat up even more in the upcoming years.

Back in 2007 only one city in the Valley hit a median sale price of over $3 million; 10 years later, there are six cities above this threshold. Furthermore, home buyers could find median sale prices under $1 million in 17 towns in 2007, while only eight towns are still below this level in 2017.

Apart from San Jose, looking for towns where the median sale price is still below $1 million would mean moving out of the heart of the Valley and towards the towns of Fremont, Newark or Union City or else moving south of San Jose in Morgan Hill, San Martin or Gilroy.

Campbell, Santa Clara, Sunnyvale, Belmont, Foster City, Redwood City, San Mateo, and Mountain View were all towns where the median home price kept under $1 million back in 2007. These towns have now crossed the $1 million mark in median sale prices and all of them have seen considerable increases over the past 10 years.

Check out how the median sale price changed from 2007 for all the Silicon Valley towns we covered,  in the table below.

This year, the most expensive homes sold in L.A. County didn’t manage to surpass the… 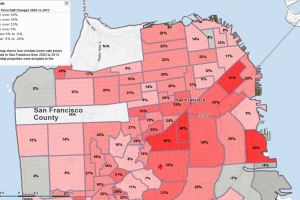