As one of the strongest real estate markets in California, the L.A. County housing market has been thriving over the past years. Our most recent research shows how the county figures have evolved starting with 2012 all the way through September 2017.

Check out the table below and see how the median sale price in L.A. County has fluctuated over the years:

*The number of transactions for 2017 was adjusted based on historical data to include an estimate for Q4.

Median square foot prices in L.A. County also followed an upward trend, reaching $389 per square foot at the end of September 2017. To get a full grasp of how prices have evolved in the county we delved even further, dividing the market by the number of bedrooms per property, and looking at the median price per square foot for each segment.

Of the transactions closed in the first three quarters of 2017, 41% were three-bedroom homes, making this segment the most popular in L.A. County. Two-bedroom homes were also popular, accounting for 28% of closed transactions. Check out the chart below for a more detailed view: 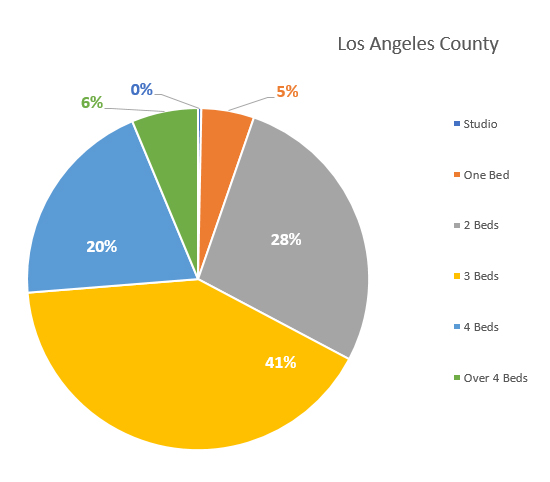 Furthermore, we took each city of L.A. County and looked at all the residential transactions closed in the first three quarters of 2017. We then split them into six segments from studios to over-four-bedroom homes, and compared them with the ones closed during the same period in 2016.

Browse through the table below to see how each city fared in terms of median price per square foot:

Following behind Malibu we have Hermosa Beach, where the median price per square foot for a one-bedroom home reached $1,009 in Q3. Bordered by Manhattan Beach to the north and Redondo Beach to the south and east, the beachfront city saw an increase in prices of 27% year-over-year.

As one of the biggest cities in the U.S., Los Angeles has plenty of high-end neighborhoods that give our top contenders mentioned above a run for their money. So, to make a fair comparison, we also looked at how the median square per foot price looks in the swanky neighborhoods of Los Angeles.

Bel Air, on the other hand, didn’t make it on our list of one-bedroom homes due to the limited housing stock in this segment, yet it’s worth pointing out that for a two-bedroom home, the lavish neighborhood offered a median price of $1,201 per square foot.

The city of Lancaster has started to slowly recover after taking some serious economic damage when the housing bubble burst back in 2008. Nowadays, the median price per square foot for a one-bedroom in Lancaster has appreciated considerably, reaching $195 at the close of September 2017.

Think Progress reported that three-time Lancaster mayor Rex Parris dubbed the city “the solar capital of the universe.” Parris explained that after the Great Recession, the city was transformed into a clean energy powerhouse, and is now producing the highest amount of solar power per capita in the whole state of California.

To succeed in this endeavor, the city partnered with SolarCity to install photovoltaic panels on municipal buildings and schools. Furthermore, the mayor also changed the zoning code, making it a requirement for new homes to be equipped to produce more energy than they consume. The solar power project, which started in 2015, has created over 1,000 jobs and has helped significantly in boosting the economy of Lancaster, contributing in part to the 27% year-over-year growth of the median price per square foot.

With prices well under the county median, many might be inclined to choose such a city to settle down in; but even if a median price under $300 per square foot might seem like a dream come true, facing a long daily commute could take a toll on one’s budget in the long run.

Just like in the one-bedroom segment, it wouldn’t be fair to compare the exclusive cities of Beverly Hills or Malibu with cities as large as Los Angeles, where we can find plenty of high-end neighborhoods. So, we went on and looked at the luxurious areas of Los Angeles, to see how they compare with the posh cities of L.A. County.

For a home with more than four bedrooms in the Pacific Palisades, Brentwood or Westwood, the median price per square foot ranges from $927 to $953. In the same segment, Bel Air clocked in with a median price of $829, making the city of Los Angeles slightly more affordable than the exclusivist communities at the top of our list.

Where to look for more space on a budget?

The cities of Downey and Covina are also an option for those who don’t want to be too far away from the big cities. According to The Downey Patriot, the Downey housing market has been making huge strides in recovering from the 2008 crisis and reached a median price per square foot of $258 for an over-four-bedroom home at the end of Q3 2017. In the same segment, the city of Covina has a median price of $271 per square foot.

Manhattan Office Sales Drop below $1B in Q3