In today’s litigious society, more trivial disputes are arising between neighbors as to where fences should be installed. These disputes typically focus on determining the proper location of property lines. While it is usually best for both neighbors to settle such a disagreement directly, if you can’t avoid a lawsuit then it is important to hire a land surveyor who prepares an affidavit in support of that survey before you go to court.

A recent Second Department case[1], Mitchell v. Young, involves a next-door neighbor husband-and-wife team who were sued by the property owner next door. The lawsuit alleged that the defendants did not have all the facts right about their property line.

The court ruled that the defendants were liable to Mitchell for tortious interference of contract with the fence company. The defendants’ deprived Mitchell of the benefit of her contract by compelling her to incur the additional expense of $375 to have to hire a land surveyor before the fencing company would agree to install the fence on her property. This was because the neighbor’s engaged in wrongful conduct by misrepresenting to the fence company that the matter was in litigation.

This case provides a very simple illustration of a difficult type of claim that is usually seen in business disputes – Tortious Interference With Contract. To establish a valid claim in NY, a party must prove:

While it is unfortunate that some neighbors choose to behave as the defendants in this case did, Mitchell’s decision to use a surveyor proved to be useful under the circumstances.

Other cases follow suit in establishing that to recover in any property dispute, it remains vital to have a credible affidavit of facts to support a survey as well as the testimony from a licensed surveyor.

As a result, the court did not allow the plaintiffs to introduce their land survey into evidence because it did not have a supporting affidavit. The plaintiff therefore lost the case. This case applied the same property rule in Mitchell v. Young.

The bottom line is if you want to sue your neighbor over a property line dispute, it is necessary that you secure the services of a reputable property surveyor that provides an affidavit with his or her survey. Whether you are self-represented or have an attorney, you should always remember to attach a land title survey with the surveyor’s affidavit to your Complaint to make sure that your case is not dismissed. Expert insight and analysis was provided by Pardalis & Nohavicka, LLP and Law Clerk Jacqueline Weiss. Jacqueline Weiss is a third year law student at Albany Law School. Ms. Weiss has completed New York State Basic Mediation Training for Community Mediation. She is currently an extern at the New York State Office of The Attorney General in its Litigation Bureau. During her first year of law school she was a judicial intern to Justice Pineda-Kirwan at the New York State Supreme Court of Queens County. She is interested in civil and commercial litigation. 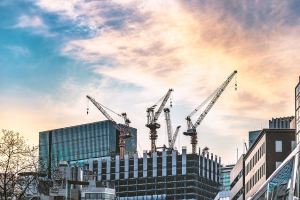 Key Takeaways: Over 115 million square-feet of office space across the top 40 markets is…