One of the most vibrant cities in the country, Miami also boasts a dynamic real estate market. To determine how home prices have evolved here in recent years, we analyzed all residential sales in Miami-Dade County in 2014 and 2018 adjusting 2014 medians for inflation to identify pure price trends.

Crunching the numbers, it became clear that Miami-Dade County has been defined by price growth. Of the 50 municipalities we analyzed, 43 registered net gains in their median sale prices; seven communities even logged growth rates of 100% and up. Conversely, sales activity trends were mostly in the negative. Those that were above zero typically posted only single-digit appreciation – just 14 markets had growth rates higher than 10%.

Of the six markets where price changes were negative, five didn’t actually experience contractions in their median sale prices. Rather, when it came to Golden Beach, Aventura, Sunny Isles Beach, Doral and Key Biscayne, the growth in median sale prices was simply outpaced by the inflation rate. As such, Ives Estates was the only market where the non-inflation-adjusted median in 2014 was actually lower than its 2018 figures; it – 12% lower, to be precise. Prices Up 100%+, But Still Below National Median in 7 Markets

On the whole, price growth has been the key trend for Miami-Dade County between 2014 and 2018. Of the 43 communities where prices grew, 42 registered double-digit growth rates. In fact, in 26 markets, 2018 figures were at least 30% higher than five years prior, while in seven communities, the growth rate was greater than 100%.

In fact, prices where effectively doubled or more in Gladeview, West Little River, Brownville, Westview, Leisure City, Opa-Locka and Pinewood. However, all seven markets remained well below the 2018 national median sale price of $230,000, as determined by the U.S. Census Bureau. Not surprising, considering that all seven had a median sale price below $80,000 in 2014. 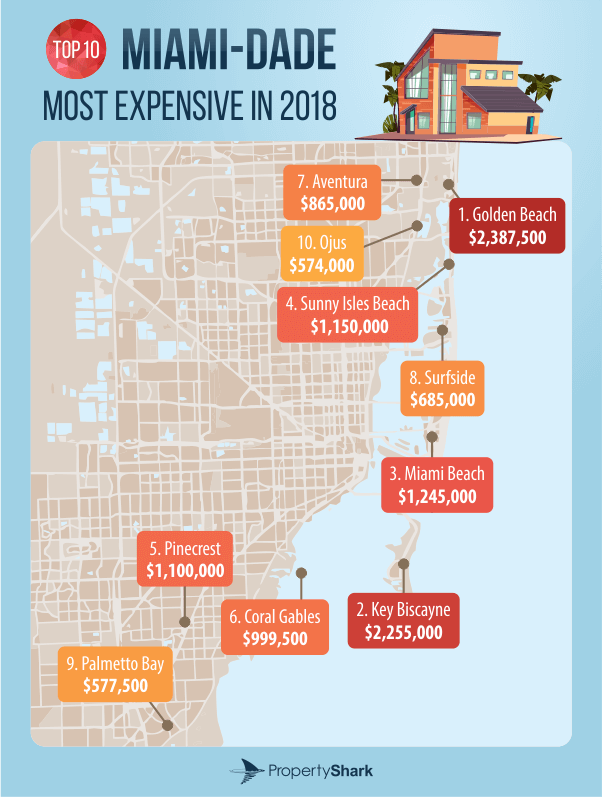 When looking at price growth from a dollar amount perspective, the ranking for Miami-Dade County looks quite different. Specifically, 10 markets experienced a rise in excess of $100,000, with Miami Beach leading comfortably with a net gain of $179,000. But, that figure represented a mere 17% expansion for the iconic community, which featured a 2018 median sale price of $1,245,000 and ranked as the third-most expensive market in Miami-Dade.

Golden Glades reported the second-highest median sale price gain in terms of dollars, with its median gaining $119,000. However, that number represented a whopping 89% growth rate for the city. Similarly, South Miami Heights’ $115,500 hike translated into an 88% expansion. As such, it had the third-highest price growth in terms of actual dollars.

Miami Most Active, But Sales Activity Down Sharply in Priciest Miami-Dade Markets

One distinction observed in Miami-Dade County was the sluggish performance of the region’s priciest markets. Of the five markets where inflation outpaced price growth, four are among the county’s 10 most expensive. In fact, Golden Beach and Key Biscayne were the two most expensive markets in 2014 with medians in excess of $2 million; they retained their leading positions in 2018. That marked a significant difference compared to other pricey urban centers like the Bay Area or Metro L.A.

Golden Beach secured the top spot with a median sale price of $2,387,500, followed by Key Biscayne’s $2,255,000 median. In addition to weak price trends, both markets were marked by decidedly negative sales activity trends. In particular, 2018 sales were down by a third in Key Biscayne, while last year’s sales figure in Golden Beach was nearly half of what it was in 2014.

Sales activity also contracted by nearly a third in Sunny Isles Beach, while price gains were outpaced by inflation here, too. However, with a median sale price of $1,150,000, Sunny Isles Beach was the fourth- most expensive Miami-Dade market in 2018. 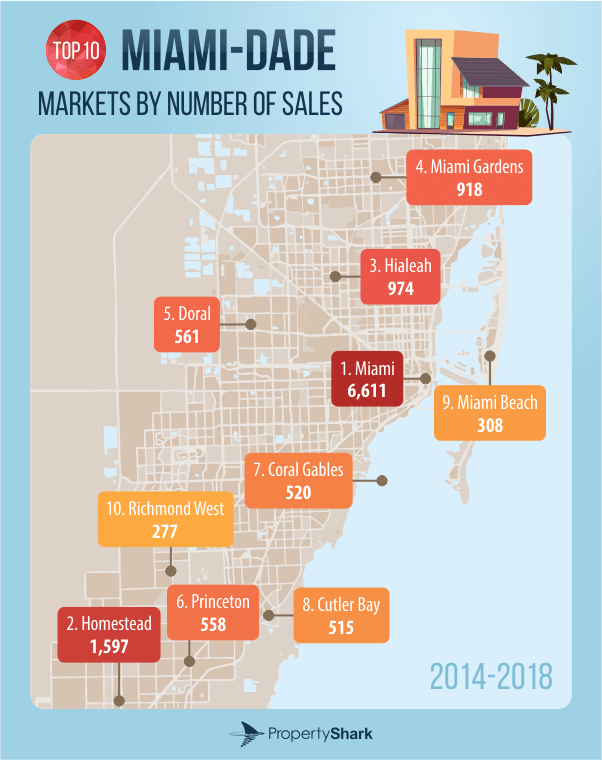 Miami Beach and Pinecrest were the only two million-dollar markets where price growth outpaced inflation. Specifically, Miami Beach’s median was 17% higher last year than in 2014, while Pinecrest’s median was up 7%. That modest figure translated into a nearly $73,000 hike in Pinecrest’s median, pushing the village above the $1 million mark to close 2018 with a median sale price of $1,100,000.

Unsurprisingly, Miami remained the most active market, with a negligible 1% slip in the number of closed sales. Its 30% median sale price expansion was the 19th-highest in the county, raising its median to $334,000. However, that still kept Miami in the bottom half of the Miami-Dade market rankings from a pricing perspective.

Browse the table below for the full picture of Miami-Dade County’s residential price evolution:

To determine the evolution of residential prices in Miami-Dade County, we considered all residential transactions closed in 2014 and 2018 in 50 towns, cities, villages and CDPs, taking into consideration single-family homes, condo units and co-op units. All package deals were excluded. In order to ensure reliable price trend data, we set a minimum of 10 sales per year per location.