The market for NYC multifamily properties took a hit last quarter, as investor trust seems to be dwindling. According to a recent report by Ariel Property Advisors, the number of buildings purchased between July and September was down 22% Y-o-Y, and 10% since the previous quarter!

284 buildings were sold in 178 transactions, for a total value of $3.09B – 15% less than in Q3 2015. This was mostly due to weak sales in August, when all transactions cashed in a total sum of $575 million, half of what the previous streak of billion-dollar-plus months brought in.

Dollar volumes down from 2015 in Manhattan and the Bronx

High-value transactions ($20M and above) were down from Q2, so the same number of sales in Q3 came to a total dollar volume 15% lower Y-o-Y, and 18% lower compared to the previous quarter, amounting to $3.09B across NYC. The total transaction value, which ended at $972M dipped lowest in Manhattan, by 32% since the previous quarter and 43% Y-o-Y. Since the same time last year, Queens recorded a major jump in dollar volume of 65%, Brooklyn saw a slight increase of 5%, while the Bronx was the only other borough to see multifamily sales volume drop – by a sizable 17% Y-o-Y. However, a Q-o-Q analysis inverts most of these trends, with Queens and Brooklyn losing traction, and the Bronx gaining an extra 25% in dollar volume from Q2.

Manhattan unit prices down 16.5%, all other areas see growth

Number of transactions in NYC was steady, but busy Brooklyn loses steam

Transaction volumes reached an 18-month high in September when no less than 78 sales were completed. Meanwhile, the whole of Q3 totaled 178 sales. Brooklyn and Manhattan lead in this total, with 51 and 42 quarterly transactions, respectively. These figures represent a slight increase for Manhattan from previous quarters. However, for Brooklyn this is a 15% Y-o-Y drop, in a borough where the largest number of multifamily buildings in NYC are regularly bought and sold, and where the number of transactions is also highest.

Ariel’s trailing six-month performance analysis, looking at the April through September time frame, revealed that the overall value of the multifamily market dropped in Manhattan, Brooklyn and the Bronx, but gained significant ground in Queens and Northern Manhattan, compared to the same period last year. For more details, see their full report here. 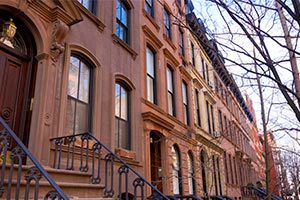 Long known for its historical homes and artistic spirit, the West Village is now the… Will the value of units in Trump-branded buildings rise post-election? The results of a PropertyShark…

For generations, New York City has been romanticized as the epitome of capitalism and the…