Besides the East Coast vs West Coast hip-hop rivalry of the 90s, the two coasts have long been subject to comparisons and cultural differences. When it comes to housing, they do have unaffordability and sky-high prices in common, as most of the nation’s priciest markets are located along the coasts.

In many places around the U.S, the million-dollar home is no longer the mansion we might imagine, but it is still a worthy threshold we use to relate to the dream home – just think of the popular show, Million Dollar Listing.  So, we decided to check how many home buyers spent this amount of money or more in order to live in one of the large cities along the coasts. For our analysis, we considered all cities over 300,000 inhabitants and looked at sales closed only within the city limits over the past 3 years.

Overall, The West Coast boasts 57,006 homes sold at over $1 million over the past 3 years. That’s around 18,000 more than in the East Coast cities we analyzed, where 39,113 home buyers paid at least $1 million for their new homes.

Admittedly, the West Coast has an advantage since it has more cities with a population over 300,000. Even though NYC powered through with as many million-dollar home sales as the top 2 cities on the West Coast combined, the balance still shifted towards the West as the numbers there were more consistent across cities.

Check out this cool map for a quick view of million-dollar home sales on each coast. There were a total of 96,119 people who bought homes priced at $1 million and over on both coasts combined.

Though the East Coast had fewer million-dollar homes sold than the West Coast in terms of sheer numbers, NYC still stole the spotlight with 31,613 homes that closed for over $1 million, close to Los Angeles and San Francisco together. The other cities on the East Coast are far behind – DC takes the second spot with 2,759 sales, followed by Boston with 2,529 sales. Looking closer at NYC, 24,457 sales above $1 million were closed in Manhattan. Brooklyn comes in strong with 5,233 sales in this range, while Queens recorded 1,854 transactions.

Florida’s sunny Miami managed to lure 1,854 buyers willing to spend $1 million and up on a home. Philadelphia, the 2nd largest East Coast city by population, had a considerably lower number of sales in this range. Over the past 3 years, only 260 home sales passed the million-dollar mark.

Coming in third on the West Coast is another city from the Bay Area, where the tech sector has been driving up prices, as recently shown in one of our studies. In San Jose, over-1-million-dollar home sales hit 7,993 during the past 3 years while the median sale price in the city reached $894,000.

SoCal takes the 4th spot with San Diego, while Honolulu comes in 5th, as 3,511 homes over 1 million dollars were sold here – a high number considering that Honolulu is one of the smallest of all the cities we analyzed.

This study considered sales over $1,000,000 closed over the past 3 years in cities with a population size of over 300,000. The property types included were single-family homes, and condo and co-op units.

There’s always something that grabs people’s attention when it comes to top 10 lists, especially… 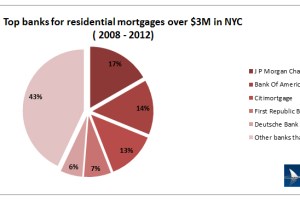 After three consecutive years of growth, the L.A. housing market has gotten even hotter in the first months of this…