Second on the list is Bushwick, also unchanged from last year’s survey. In 2016, homes in this neighborhood traded for a median sale price of $534,000. Last year, the median sale price clocked in at $650,000, translating into a 22% increase year-over-year. Compared to 5 years ago, home prices almost doubled in Bushwick. Even though the top two neighborhoods did not change, a series of reshuffles did happen in the top 10. Harlem climbed to the third spot after having ranked at the bottom of the list last year. The real estate market in Harlem has already grown for a while now – one of our recent analyses showed that the average sale price per square foot of townhouses in the neighborhood climbed 171% since 2009.

East Harlem’s rezoning was approved at the end of 2017 and the neighborhood is a new entry in the list of hottest neighborhoods for 2018, showing that Upper Manhattan will continue to attract interest. “Manhattan will continue to be a strong market for investment-minded buyers, with Upper Manhattan providing unique opportunities at attainable price points.” said Jed Pavlovich from Keller Williams.

TriBeCa might be a surprising appearance in the list, but it may offer some deals for those who have the money to invest in NYC’s priciest neighborhood, especially since the luxury market is going through a slowdown and sellers are more willing to negotiate.

More interestingly though, the Bronx makes an appearance after having been absent in 2017. Mott Haven entered the list as high as the 4th spot. Located in Southwestern Bronx, just across the Harlem River, this neighborhood appears to be poised for growth due do its proximity to Manhattan. Eric Agosto from Halstead shared the following insight with us: “The Bronx will remain the most desired borough and will see significant increases in prices. Especially in Mott Haven and its West Bronx Neighbors of Concourse and High Bridge. East Harlem will also see some movement as there is a huge demand for the neighborhood despite the lack of inventory.”

Queens makes one appearance in the list of hottest neighborhoods with Long Island City while last year it took two spots when Astoria joined LIC in the ranking.

In last year’s survey, the respondents were almost evenly split between a buyer’s market and a seller’s market, with a small advantage going towards the sellers. For 2018, the balance shifted, though slightly, to buyers, which is rather new for NYC’s real estate market. Given the increased supply of new inventory coming to the market, 57% of the real estate pros surveyed favored buyers. 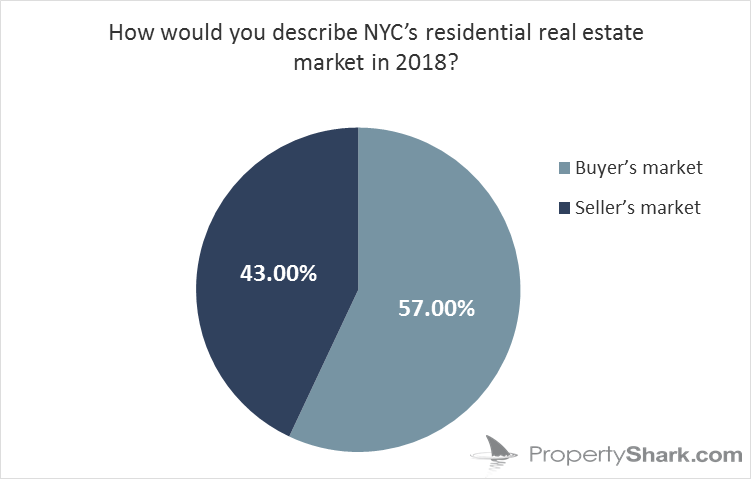 Zen Avery from Niche Real Estate expanded on this topic in our survey: “I think 2018 will see a lot of new development inventory in presales in NYC & Brooklyn. With many new developments seeing closings end of 2017 into the new year of 2018 I think developers are going to have to compete with almost brand new product ready to move in on the market. It should create a price leveling or better back-end concessions for buyers.”

Buying will still beat renting in 2018, say 70% of respondents

Rent growth took a breather in NYC last year, though Manhattan still has the highest prices in the entire US. Manhattan and Brooklyn experienced a 1.7% drop in 2017, according the RentCafé’s National Rent Report. Still, respondents believe buying is the best option – 70% favor it when compared to renting, despite the increasing concessions renters may expect to receive this year as well. 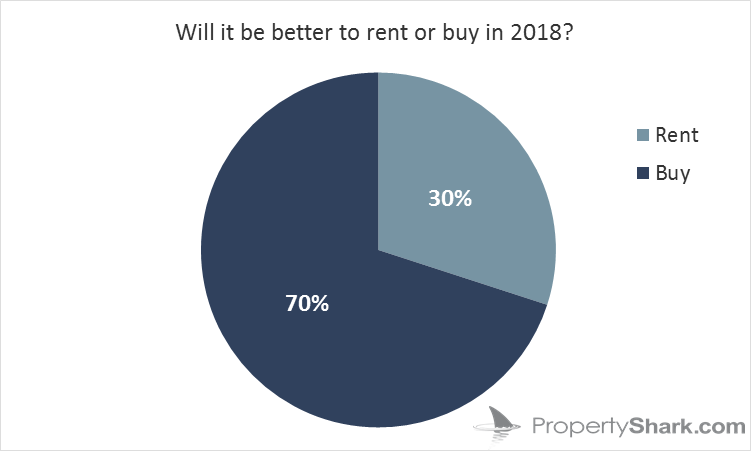 Westchester – the top choice for buyers heading out of the city

Even though the market might favor buyers this year, there will likely be plenty of competition pushing people out of the boroughs. Last year’s survey revealed that 49% of respondents believed that buyers will look at other options beyond NYC. This year, 52% said they expect to see more would-be homeowners extend their search in other markets. Westchester once again tops the list of alternatives, followed by Nassau County and, of course, New Jersey.

The L train shutdown is not due until 2019 but developers, agents, and residents are already planning for it . We asked whether renters in affected neighborhoods, especially Williamsburg, will chose to move out and avoid the commute hassle. 54% of respondents said renters will look elsewhere and the top alternatives offered were Bed-Stuy, Brooklyn Heights, Long Island City, Park Slope, and Jamaica.

Majority of real estate pros say the luxury market will contract in 2018, though only slightly

NYC’s luxury real estate market went through a slowdown period over the last 2 years and 2018 is likely to continue this trend. 70% of our respondents believe this segment will contract or stay flat this year. 50% of respondents foresee only a slight contraction, which could be a long awaited correction, as Nicole Beauchamp explains: “It will see a correction in 2018 especially as more of the new development inventory comes to market in the ultra-luxury price point.”

Housing bubble? 54% of the respondents say NYC is in a real estate bubble now

The possibility that a new housing bubble might form has attracted a lot of speculation lately, so we wanted to see what market players believe about this topic. Our respondents were split almost evenly, with a small advantage on the side of those who believe that NYC is currently in a housing bubble. 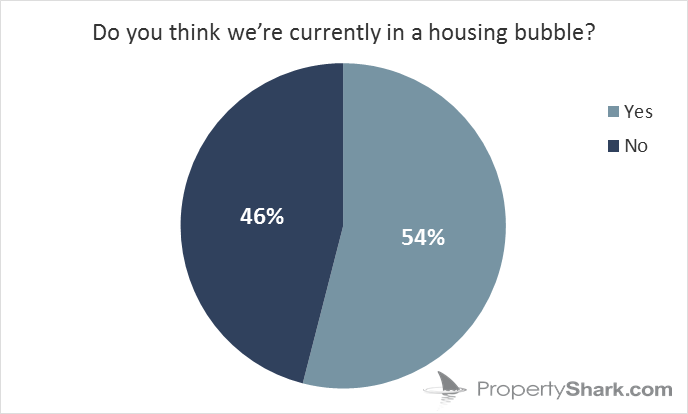 As last year, we asked real estate pros for their opinion on foreign investments in NYC real estate and 54% of them said they believe it will keep strong in 2018. The top sources of investment are likely to stay unchanged: China and Russia. This survey ran on the PropertyShark website for 1 month, starting on December 2, 2017. There were 132 responses from residential brokers, investors, and appraisers who are PropertyShark’s clients. Staten Island’s luxury home market has some nice figures to show for the 2005-2012 period….