New York is a city of condo buildings whose names resonate almost as strongly as those of top celebrities. As older, established condo buildings are now joined by new developments that are changing the city’s skyline and making headlines thanks to units that go for dizzying prices, we set out to find out which are the city’s best-selling buildings of all time by total sales volume.

It’s become a tradition for PropertyShark to release rankings of New York’s best-selling buildings by units sold, so this time, taking into account only developers’ first time-sales, we ranked the city’s top 50 condo buildings by sales volume and also calculated the average unit price for each building. So, which developers recorded the highest sales amounts and which buildings topped the $1 billion mark?  Read on for key insights and make sure you check the top 50 at the end of the article.

49 of NYC’s 50 best-selling buildings are located in Manhattan. Furthermore, the island’s top 7 developments have registered total sales in excess of $1 billion each, and both 432 Park Avenue and One57 are projected to surpass $2 billion in sales volume. 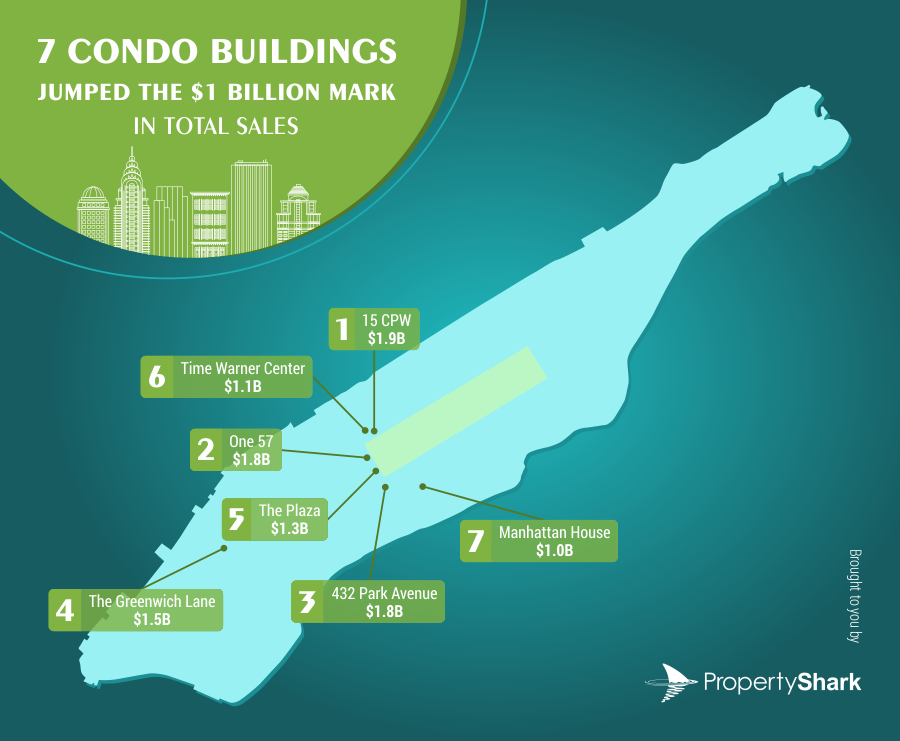 With average sale prices above the $20 million mark, 432 Park Avenue and One57 feature the highest per unit average prices in the city. One 57, the 2nd best-selling building in NYC, averages $21,134,400 per unit with 12% of its supply yet to be sold.

432 Park Avenue averages $20,177,613 per unit and is the 3rd best-selling building in the city – for now. With 37% of its supply yet to be purchased, it’s projected to surpass 15CPW and become New York’s unchallenged best-seller.

Unsurprisingly, Central Park is a best-selling hotspot. 6 of NYC’s top 10 best-selling buildings are concentrated around the New York City landmark, including the top 3.

Riverside Boulevard is also a popular location for the city’s top selling buildings, with 6 developments from the city’s top 50 located here – including top 10 runners-up One Riverside Park at #11 and The Rushmore at #12.

At #13, Ten Madison Square West is Broadway’s best-selling building with $688,038,920 in total sales. Two more of NYC’s most prolific sellers are also located on hotspot Broadway – Laureate with close to $428 million in sales and The Apthorp with $361 million in total sales.

As Brooklyn home prices continue to increase and new condo developments rise throughout the borough, it’s not surprising that up-and-coming luxury player Brooklyn made its way into our top. In fact, the large number of condo units that went online in the borough in early 2017 pushed average home values up high enough, to land no less than 4 Brooklyn neighborhoods among the city’s most expensive – Manhattan Beach, Boerum Hill and Brooklyn Heights, with DUMBO leading the way. Furthermore, 2 of 2016’s top-selling buildings were Brooklyn developments, with Q1 2017 bringing 4 Brooklyn assets into the city’s top 10 best-sellers.

When it comes to all-time best-selling buildings, One Brooklyn Bridge Park is the city’s 21st best-seller, registering a total sales volume of $503,698,589. With 97% of its 443 units sold, the 360 Furman Street development has an average sale price of $1,137,017 per unit – one of the least expensive averages among the city’s top-selling developments.

Clocking in at an average of $900,027 per unit, The Orion has the lowest median sale price in our top 50, followed by The Atelier’s average of $969,909 per unit. Both buildings landed among the city’s 25 best-selling developments by sheer number of units. The 551-unit Orion is NYC’s 22nd bestseller, while the 478-unit Atelier grabbed the 25th spot, with 4 units still on the market. Just barely over the luxury price point at $1,040,276 per unit on average, sold-out The Collection also ranks among the least expensive options on our list. The 33rd best-selling building in NYC, it totaled $424,432,422 in sales.

Check out NYC’s top 10 all-time best-selling buildings below and scroll down to see which of the city’s iconic developments are among its top 50 best-sellers.

Built in 2005 as one of the largest apartment developments in New York City, the 609-unit Sheffield57 is currently one of the city’s best-selling condos buildings. Sales volume in The Sheffield57 has reached $803,155,159, with 12% of units yet to be sold. Luxe amenities of course abound in what is one of the most expensive condo conversions in the city. They include an indoor/outdoor swimming pool, 3 sun decks overlooking Midtown Manhattan, a spa and a sleek fitness center with yoga/Pilates studio among others.

One of Tribeca’s most luxurious residential developments, 56 Leonard Street made NYC’s best-selling top 10 thanks to an $890,414,761 sales volume – a total projected to expand with the sale of the remaining 14% of units. It showcases a Herzog & de Meuron-designed two-floor amenity complex with a 75-foot infinity lap pool as one of its most striking features. Residents can also access the building’s conference room, indoor/outdoor theater and sleek fitness center, among many other exclusive amenities.

Built in 1950 as a landmark apartment development on the Upper East Side, the extensively renovated 575-unit development is currently New York’s 7th residential structure with sales topping $1 billion, With 31% of its units still on the market, and the average sale price clocking in at $2,618,276, the luxurious development will grow well over its current sales volume of $1,034,219,13. Manhattan House Condo residents enjoy access to the rooftop Manhattan Club with its indoor/outdoor entertaining areas, a luxe fitness center and yoga studio and sizeable private garden.

Once boasting the highest market value in New York City, Time Warner Center’s residential component is still among the city’s most successful. Having reached $1,076,2228,720 in sales, units in the 97%-sold development go for an average of $5,519,122. Exclusive amenities at the 2004-built asset include concierge services, a ballroom, landscaped roof deck, fitness center and health club, complete with pool and access to the Mandarin Oriental Hotel’s spa and the luxurious shopping available in the building’s commercial component.

Originally built in 1907 as a hotel, the French chateau-styled building has become an icon of the city, featured in countless movies and F. Scott Fitzgerald’s landmark novel The Great Gatsby. Concierge and hotel services are made available to residents, along with a host of high-priced amenities. Units here sold for $7,956,261 on average for a total sales volume of $1,296,870,614 to date.

Having amassed $1,513,709,635 in sales to date, the 5-building development is currently 91% sold with units going for an average of $8,138,223. Green spaces, walking trails and a sizeable private garden characterize the 204-unit development. Each structure in Greenwich Lane features a full fitness floor, complete with golf, yoga and wellness rooms. Additional features include a 75-foot indoor pool, 22-seat screening room with wet bar and Thomas O’Brien-designed interiors.

Currently the tallest residential building in New York and the western hemisphere, and the 3rd best-selling one, 432 Park Avenue has already exceeded $1.77 billion in sales. Its final sales volume is projected to cross over the $2 billion threshold to make it New York City’s #1 best-selling building ever. Three floors of luxurious amenities have enticed deep-pocketed buyers to invest in the 96-story tower. An executive boardroom, 18-seat screening room, library complete with billiards room and a 75-foor two-lane indoor swimming pool are just a few of the building’s exclusive amenities, along with a resident-only restaurant led by a Michelin-starred chef.

At $21,134,400, One57 has the most expensive average sale price among the city’s top-selling buildings. Projected to surpass $2 billion in sales, the 83-unit development is the city’s all-time bestselling building and its 2nd tallest residential structure. Known as “The Billionaire Building”, One57 showcases a private function room, performance and screening venue, art atelier and a library complete with pool table and 24-foot aquarium. Residents can also access hotel amenities at the Park Hyatt below, including the triple-height indoor swimming pool and health club complete with yoga studio, and spa and steam rooms.

One of the most hyped buildings of the early ‘00s, Central Park West is a two-part development – The Tower soars 35 stories high on Broadway, while the 19-story The House boasts coveted Central Park views. With 229 units sold for a total of $1,881,982,784, The House is New York City’s best-selling building ever. Residents can access an impressive amenity package that includes a 14,000-square-foot fitness center, a 75-foot sky-lit lap pool, spa-level treatment rooms, a 20-seat private theater and an outdoor terrace. Past and present celebrity residents include Robert De Niro, Denzel Washington, Sting and Goldman Sachs CEO Lloyd Blankfein.

Check out New York City’s top 50 best-selling buildings of all time below:

Sales volume figures were calculated based on first-time unit sales and do not include sales for commercial and retail spaces that are sometimes part of the condo projects. In the case of The Trump World Tower, The Trump Place and The Trump International Hotel & Tower, approximately 30% of sales were registered before 2000 and as such, sales figures were estimated based on property transfer taxes. Condo developments built before 1990 and co-ops were excluded from our ranking due to incomplete data. The ranking is updated with sales recorded through June 12, 2017. We defined sold out buildings as those with a 95% or higher sales rate.

The Most Expensive Zip Codes in Florida 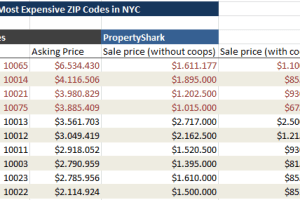 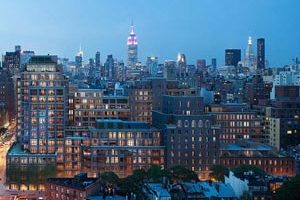